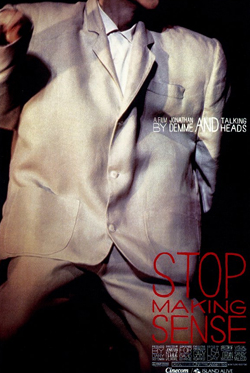 Jonathan Demme’s 1984 film documenting Talking Heads’ three night stand at the Hollywood Pantages is one of the great concert films of all time. Thanks to Heads frontman David Byrne’s ingenious staging, the film works in a narrative vein as well, beginning with Byrne alone on the stage fidgeting through the schizo rhythms of Psycho Killer and ending with the introverted singer transformed into a total party animal, speed-jogging around the stage to Life During Wartime. Demme’s direction is simple yet elegant and the camera always seems to be in exactly the right place. One of the most joyful movies ever made, be sure to see (and hear) it with a proper sound system.