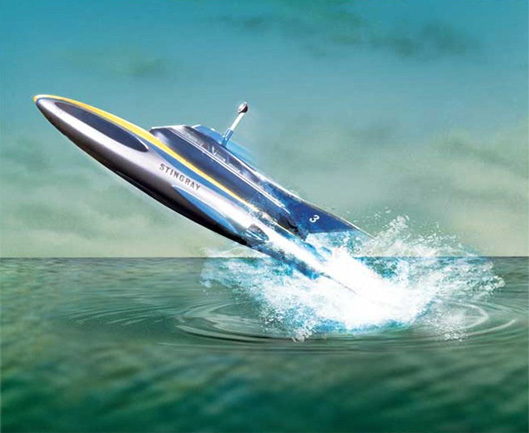 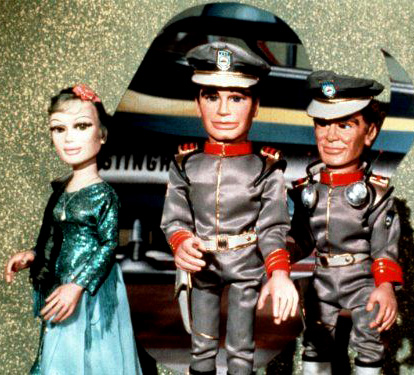 If nothing else, Gerry and Sylvia Anderson’s Stingray should be celebrated for inspiring Team America: World Police, the gonzo marionettes-on-the-make political satire from South Park agitators Trey Parker and Matt Stone. If their 2004 farce was designed to provoke just about everybody, Stingray was also pretty out there, albeit in a trippy, Summer of Love kind of way. An aquatic puppet show swimming in psychedelic color, languid pacing, and underwater scenes apparently filmed inside a lava lamp, Stingray reflected the inveterate stoner’s mindset better than anything in Yellow Submarine. The entire series has just been released in an extravagant five disc box set from Network, Stingray: The Complete Series Deluxe Edition, and the high definition imagery is not just surreal, it’s hyper-real—a single frame is as vivid as any View-Master reel. 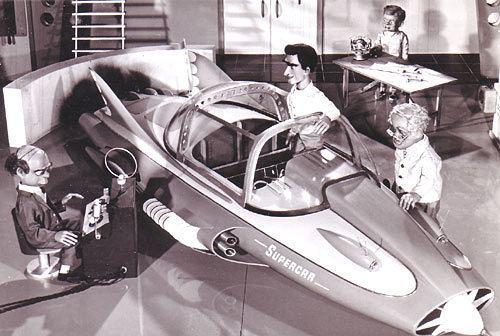 Though always immaculately rendered, the Anderson’s winning combination of model sets and mannequins wasn’t always so dazzling—their first TV productions were saddled with tiny budgets and broadcast in prosaic black and white.

It all began with 1957’s The Adventures of Twizzle about a puppet who could stretch his limbs like Jack Cole’s Plastic Man, and 1960’s Torchy the Battery Boy, the Pinocchio-like tale of a toy maker and his adventurous little robot. Supercar, the sky high exploits of test pilot Mike Mercury, upped the ante with a two-fisted approach that recalled vintage movie serials and became the first Anderson show to be released stateside—it landed with a bang on American television in 1962. Mercury and his stout-hearted if eccentric crew immediately hooked the Saturday morning mob with storylines inspired by spy films of the forties and the supercool design of the multi-functional Supercar itself—the Swiss Army knife of spacecrafts. Fireball XL5 followed that same year, a pure science fiction series tracking the extraterrestrial adventures of the World Space Patrol in 2062. 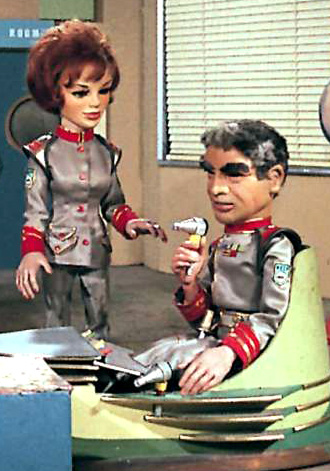 English television titan Lew Grade (he produced everything from The Prisoner to The Muppet Show) was so impressed by the Anderson’s success he bought out their company, and it was Grade who made the call to produce their next series, Stingray, in color—but just for U.S. markets, the color version didn’t appear in the U.K. till 1969. They dubbed the chromatic upgrade “Videcolor” and the Anderson’s trademark style—string-operated manikins bobbing and weaving through intricately detailed sets—was given a fancy moniker too: Supermarionation (perhaps a sneaky tribute to Dynamation, Ray Harryhausen’s space age brand for his own animation technique.)

In their initial forays into the world of puppets, Gerry handled the production, writing, direction, and occasional voice work—wife Sylvia handled most of those chores along with designing costumes for the characters (the marionettes were formidable in their own right; between two and three feet high, and rigged with complex mechanisms, they were great for detail but hell on production costs—bigger manikins meant bigger studios). As work began on Stingray, Gerry stepped away from directing and Sylvia took a break from voice work so they both could concentrate on the nuts and bolts of the production and the rigorous art of storytelling—and the effort shows. 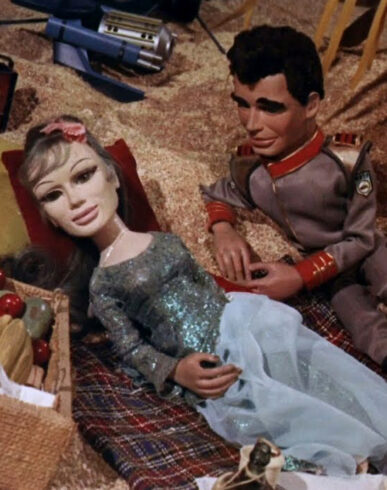 The world of Stingray is a candy-colored dreamland for kids and a tongue-in-cheek bizarro world for their fun-loving parents. Forgoing the outer space of Fireball XL5 and the sunny skies of Supercar, Stingray dives nose first into the kind of looney tunes underwater fantasy playing out that same year on TV’s Voyage to the Bottom of the Sea. Thanks to the hard-charging theme song composed by Barry Gray, each episode of Stingray fairly jumps out of the gate—a typical chapter revolves around a day in the life of WASP, the World Aquanaut Security Patrol.

The show’s premiere episode, titled simply “Stingray”, introduces submarine pilot Troy Tempest, a taciturn hero-type voiced by Don Mason, and navigator George Sheridan, Tempest’s gung-ho sidekick voiced by Robert Easton. Lieutenant Atlanta Shore, a regal redhead by way of Carnaby St., is voiced by Lois Maxwell and not surprisingly is very Moneypenny-like in her laissez-faire reactions to the weekly fireworks. Ray Barrett provides the vocals for the gruff leader of Marineville, Samuel Shore—like X-Men‘s Professor Xavier, Shore is confined to a mobile chair and does most of his grousing sitting down (the puppet’s stationary status was also another cost-cutting device). Stingray‘s wild card is the perennially silent Marina: a mysterious mute rescued by Tempest from the undersea kingdom of Titanica. An ethereal sex-bomb in the laconic mode of Vitti or Bardot, Marina’s blank expression suggests she’s either possessed of a profound cosmological intelligence or one fry short of a Happy Meal. 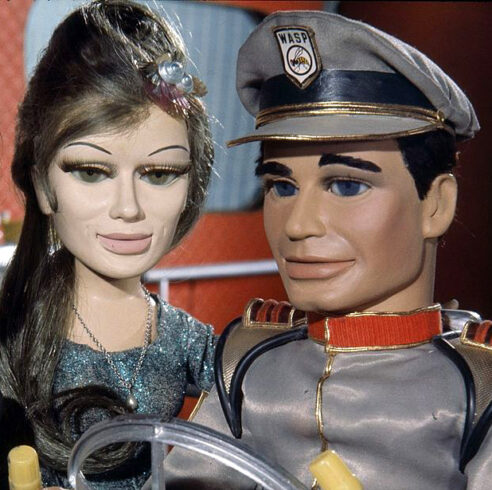 Truth be told, all the characters sport relatively vacant stares, an obstacle that was leavened by cycling through an expressive variety of puppet heads from shot to shot. The greatest hurdle remained the profusion of strings enveloping the marionettes—that those wires are rarely intrusive is a tribute to the diligent folks at the other end of those strings and the craftspeople behind the scenes. The show’s head shop aesthetic was fully-formed right from the start thanks to future Bond special effects artist Derek Meddings, the art direction of Bob Bell, and model-maker Reg Parks, whose stylish creations include the Stingray sub itself, a sleek piece of machinery that borrows its futuristic curves from a toy space gun. 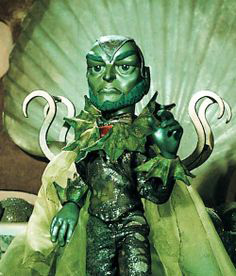 Sylvia Anderson’s stories, both whimsical and sophisticated, keep the series afloat and she trusts the kids in the audience to catch any curve ball she might throw—much like Carl Barks’ respectful approach to his endlessly inventive Donald Duck stories. The plots are rarely conventional, and usually unpredictable: dust-ups with WASP’s usual foes, the Aquaphibians, encounters with more esoteric terrors in Invisible Enemy, and the wonderfully goofy entry, Loch Ness Monster—a haunted castle story which takes place in wind blown Scotland and features a “monster” that just begs to be petted.

There’s an out-of-nowhere dream sequence in that episode that is in fact a harbinger of things to come: Sylvia often used the character’s dream lives to explore both their fears and desires (in the Loch Ness episode, Sheridan dreams he’s a top-notch bagpiper). The Cool Caveman ponders Tempest’s dreams about undersea cavemen, and Raptures of the Deep plays up Tempest’s autocratic yearnings with his late night reveries of ruling the world. For the head man of WASP, Tempest seems to have a multitude of issues—in Tom Thumb Tempest, he’s the victim of a mysterious plot to shrink him. Tempest is so terrified he wakes up in a sweat… yes, the Anderson’s puppets actually sweat. 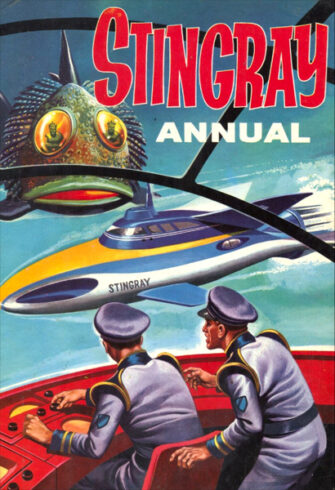 Stingray wrapped production in 1965 after 39 episodes. The final show, Aquanaut of the Year, took the form of a tribute to Troy Tempest in front of a “live” audience and utilized clips from past shows. For once, such self-congratulation was warranted and Stingray‘s soaring popularity was reflected in the avalanche of promotional tie-ins reminiscent of the media frenzy surrounding entertainments like Zorro, Davy Crockett, and Star Trek.

The fifth and final disc in Network’s beautifully appointed boxset catalogues that puppet-mania with documentaries, toys, home movies and a lot more—high on the list is Gerry Anderson’s own commentaries for two of the shows, a Sylvia Anderson interview, and a plethora of kid-friendly tie-ins: images from a Stingray Give-a-Show Projector (“Give-a-Show” was an archaic version of home video for boomers), and examples of the Anderson fan mag, TV Century 21, a weekly comic for British children. As lovingly executed as Stingray itself, the mind boggles at the magazine’s production schedule. 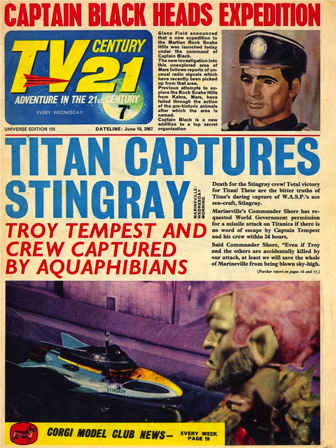