Twilight Time goes for a Blu-ray upgrade of the western remake with the all-star cast. Forget that there was ever a John Ford or a John Wayne and it’s a perfectly presentable wild west story, but the mileage may vary for classic western fans inclined to make comparisons to the 1939 classic. Top billing goes to an enthusiastic Ann-Margret… but we’re sorry to report that her hip-swinging rock number, ‘Viva Geronimo!’ was cut at the last minute. 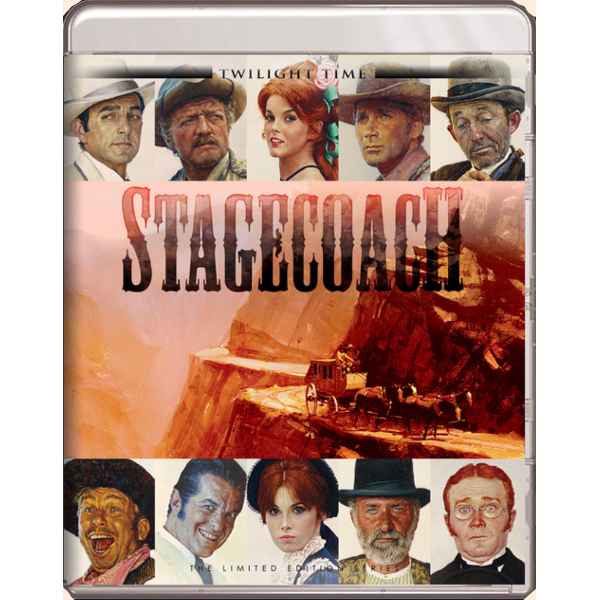 The Hollywood western is the most flexible of movie genres. A western doesn’t have to be set in the past, and foreigners love them so much that they’ve been filmed in Italian, German, Turkish and Japanese. In general, they don’t date too badly either. Young fans that couldn’t name three films from 1948 still love Red River.

But Hollywood didn’t always agree with that assessment. 20th-Fox’s plan must have seemed a perfectly good idea at the time: remake a classic western deemed too old-fashioned to ‘hold up’ for audiences in the swingin’ year of 1966. That old oater is in B&W and the kids won’t recognize anybody in it, except maybe John Wayne. Little did the producers of the CinemaScope & color Stagecoach realize that in 1965-1966, a new wave of nostalgic film fandom was sweeping the country, starting on college campuses and filtering down to every afternoon TV movie show with a friendly local host. Humphrey Bogart leaped back into prominence and was championed the King of Cool; a Camp aura grew around cult figures like W.C. Fields, Mae West and the Marx Brothers. Knowing lots of trivia about old movies was suddenly an “in” activity. In other words, John Ford’s original 1939 Stagecoach was suddenly rediscovered. College and museum screenings gave the exciting western, with its large cast of entertaining characters, an enthusiastic welcome.

On its own merits the 1966 Stagecoach is a colorful and eventful adventure, certainly the equal of most westerns from its year.

Directed by the dependable Gordon Douglas, the remake would be an acceptable show if its every frame did not invite comparison with the original. Screenwriter Joseph Landon (The Rise and Fall of Legs Diamond, Von Ryan’s Express) moves the action from Arizona to South Dakota and adds several bloody action scenes as well as a suspense sequence where the title conveyance threatens to fall off a cliff. The despicable Plummer Gang is expanded to resemble a lethal outlaw family, akin to the Clantons in My Darling Clementine. Otherwise, events happen more or less identically as in the original. Despite big magazine write-ups and other publicity, it seems as if the public wanted something a little more fresh than an old movie with new faces.

A pack of curious characters are thrown together on a stagecoach trip through hostile Indian territory. Prostitute Dallas (Ann-Margret) and drunken doctor Josiah Bone (Bing Crosby) are fleeing trouble with the military over a double killing in a bar. The pregnant Mrs. Lucy Mallory (Stephanie Powers) wants to rejoin her husband, a cavalry officer. Embezzling banker Henry Gatewood (Bob Cummings) uses the Indian threat as cover to abscond with $10,000 of his firm’s money.  Shady gambler Hatfield (Mike Connors) is also packed into the coach, along with the meek whiskey salesman Peacock (Red Buttons), who wants to ‘rejoin the bosom of his family.’  Up top, the practical stage driver Buck (Slim Pickens) would rather sit this trip out. Marshall Curly Wilcox (Van Heflin) is aboard to arrest the wicked Plummer Brothers and their outlaw father Luke Plummer (Keenan Wynn). The motley group pick up prison escapee The Ringo Kid (Alex Cord) on the trail. Things get more complicated when Mrs. Mallory gives birth at a stage stop that’s already been wiped out by marauding Indians.

Stagecoach begins with a nod to changing times: a rather silly opening shows a detachment of troops killed by Indians, with special attention given to weapons plunged into faces and backs. One trooper notices that a creek is running red with blood, just before he too is dispatched with a stone-age axe. It’s no longer enough to simply suggest that it’s dangerous out there. 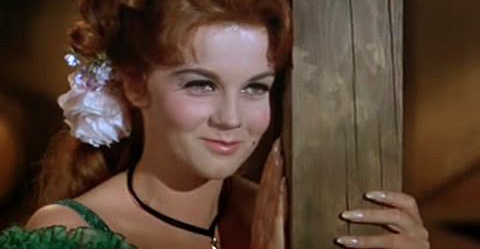 With an exception or two one can’t fault the actors, just the casting director who assumed that stuffing the marquee with a bunch of familiar Hollywood faces would achieve memorable results. Ann-Margret acts up a little storm, but she seems too impatient to leap that last hurdle to super-stardom. Bing Crosby nabs the most colorful part. Bu not hogging the screen with his star persona, he comes off well in the plus column. Alex Cord has the toughest row to hoe, seeing as everyone will naturally compare him to John Wayne. Cord wisely opts to play Ringo in a low-key manner. Red Buttons is unfortunately cursed by his backlog of comic foil sidekick charcters that constantly ‘act up’ to attract our attention. Somebody’s idea of fun was to have the docile but civilized Peacock become a roaring alcoholic over the course of the trip, enabling Buttons to once again play clownish comic relief. It’s not a pretty sight.

The other actors more or less play their roles straight, adding additional business to what had been done before. Van Heflin’s Marshall is tougher, and more mercenary about collecting the bounties set on outlaws. Michael (‘Mike’) Connors goes through the motions as the mysterious Southern gambler Hatfield, but he lacks the profound aura of tragedy that John Carradine brought to the role. Hatfield’s final ‘act of mercy’ with a derringer is also jettisoned, probably because 1966 audiences would think it too corny. That’s okay, because the new version never approaches the emotional pitch necessary to make Hatfield’s gesture work.

Bob Cummings is simply annoying as the crook banker, a role that goes too strongly against his identity as a wisecracking, amiable TV star. Banker Gatewood’s added scene with Luke Plummer does not improve on the character’s original function as a scapegoat — audiences always applaud the banker’s arrest in the ’39 version. Stephanie Powers plays her part pretty much in a trance, but Slim Pickens’ standard good-guy yahoo characterization is a good fit for the cowardly stage driver. What hurts this new Stagecoach the most is the idea that one can just throw ten varied acting styles together and expect everything to click. Only the story’s forward momentum holds the movie together. 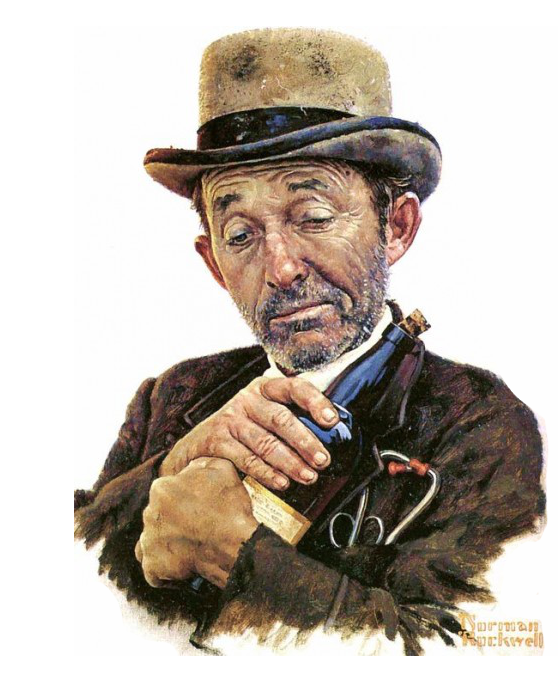 Beautiful Colorado locations make for a stage trip that seems more pretty than dangerous, and Jerry Goldsmith provides a bouncy set of themes to lift the film’s spirits. Most western fans will want to see what Gordon Douglas and second unit director Ray Kellogg do with the famous stagecoach chase. Let’s just say that it’s long, a lot of ammunition is fired, and those passengers on the bouncy stagecoach are really fantastic shots. We also wish to commend the craftsmen that built that stagecoach, which holds together through some really rough stunts filmed at a full gallop. The Indians’ strategy seems to be to chase the coach while presenting themselves as excellent targets. I really don’t know what they expect to achieve, unless it’s the time of year to trim some fat from the tribal membership roster.

One of the oddest publicity ideas of the 1960s, and surely an expensive one, was to commission the beloved illustrator Norman Rockwell to do ten character portraits and sundry theme paintings for the film. They’re displayed in the cast recap at the end of the show. Rockwell nails the various male actors, making Bing Crosby’s drunken doctor resemble Emmett Kelly. But Stephanie Powers and especially Ann-Margret barely look like themselves. It’s as if Rockwell just wasn’t intrigued by their faces.

The Twilight Time Blu-ray of Stagecoach is a colorful widescreen presentation from film elements in fine shape; all those heavily wooded skylines are pleasant viewing, just in themselves. The soundtrack is presented in the original mono. Liner notes by Julie Kirgo clear up many ancillary questions about the remake, and directs viewers where in the film Norman Rockwell’s brief cameo can be found. He’s seen about six minutes in, playing a gambler named ‘Busted Flush’ Rockwell.

Stagecoach ’66 was an early Twilight Time release on DVD. For the Blu-ray they’ve added a commentary track by Lee Pfeiffer and Paul Scrabo, experts on escapist productions of the ’60s and ’70s. I hope TT nominates more of their early DVDs for the bump to HD — the one I’m pining for is John Huston’s The Kremlin Letter.

Composer Jerry Goldsmith’s musical contribution can be heard by itself on the Isolated Music Score track. A treasured feature on the majority of Twilight Time discs, an isolated music track lets us hear and see how movie soundtracks are designed. Goldsmith is a great musical storyteller. He chooses carefully which on-screen events to single out for special musical comment, and precisely when to start and stop a cue. His music emphasizes plot points skipped in the camera direction, and bolsters performances by mirroring the emotions of the characters. Goldsmith is also quite versatile. In ’65 and ’66 alone, he scored the features The Satan Bug, In Harm’s Way, Von Ryan’s Express, Morituri, A Patch of Blue, Our Man Flint, The Trouble with Angels, Stagecoach, The Blue Max, Seconds and The Sand Pebbles.