One of the best pictures of 2015 is an accurate and relevant movie about a truly difficult subject. Mark Ruffalo, Michael Keaton, Rachel McAdams, Liev Schreiber, Brian d’Arcy James, John Slattery and Stanley Tucci lead an impressive ensemble; I don’t think I’ve ever seen such a complicated story told with such clarity, and so entertainingly. 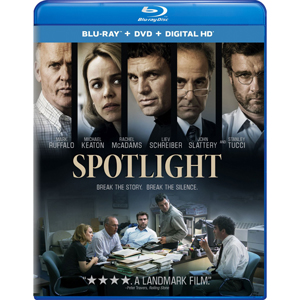 They say that The Revenant and The Big Short have a leg up on this year’s Oscars, but my vote still goes to Tom McCarthy’s Spotlight, an extremely good movie about a subject difficult to approach in a responsible manner. Issue movies easily become big-screen versions of the ‘disease of the week’ TV movies of the 1980s. This Universal release rings all the bells — it’s close to the facts, it’s fair to all concerned, it’s not in the least exploitative, and it doesn’t flinch from pointing fingers at the guilty party. That’s exceedingly rare today. When the normal channels of information seem compromised by money interests or engulfed special interests or crowdsourced misinformation — newspapers, TV, the Internet — it’s refreshing to see a commercial movie show such integrity. Who knows? In forty years somebody may buck current trends and decide that Freedom of Religion doesn’t make churches untouchable by civil and criminal law. 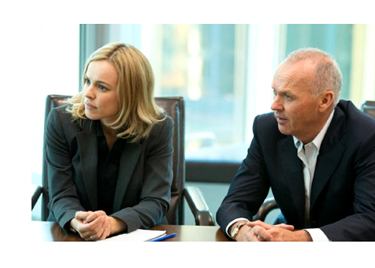 The subject is a major newsbreak from early 2002, by the Boston Globe. The paper’s staff worries when a new top executive arrives from Florida to take charge. Marty Baron (Liev Schreiber) is not a Boston man and he has a reputation for cutting staff. Especially concerned is a special investigative task force called Spotlight, a four-person office that takes on special stories requiring time and finesse to develop. Baron asks the group leader Robby Robinson (Michael Keaton) to direct Spotlight’s energies on a cold story about a pedophile Catholic priest. The team’s Mike Rezendes (Mark Ruffalo) enjoys the challenge of contacting a ‘difficult’ attorney, Mitchell Garabedian (Stanley Tucci), while Sacha Pfeiffer (Rachel McAdams) does interviews with men that were molested as children and Matt Carroll (Brian d’Arcy James) looks at ways of getting more information. The political resistance to Spoltlight begins with polite, unofficial entreaties, which soon become more insistent. Robby must deal with the local Catholic glad-hander Pete Conley (Paul Guilfoyle), and weather I-won’t-talk / don’t-rock-the-boat sermons from his attorney friend Jim Sullivan (Jamey Sheridan). Marty Baron is summoned to an audience with Cardinal Law (Len Cariou). Editor Ben Bradlee Jr. (John Slattery of Mad Men) slowly comes to the realization that the paper knew about the molestations in the past, but buried the story. The group as a whole is stonewalled by the lawyers representing the Church, including evasions from attorney Eric Macleish (Billy Crudup). They also listen to an activist (Neal Huff) who gives them a better idea how so much molestation could go on and not be reported. A break comes with an ex-priest who has been studying church molestation; he says that the cases are not random incidents by isolated bad apple priests, but a phenomenon more like a pandemic. While Mike works to unseal some court documents that would reveal church complicity in the crimes, Matt devises a way to use a database to determine how many priests have been ‘reassigned’ in a way that would suggest the church was hiding their criminality.

Spotlight has been compared to All the President’s Men as a paean to investigative journalism. Its graces are many. A present-tense procedural movie, it has no exploitative horror flashbacks, no scenes of screaming and no tearful gimme-the-Oscar supporting turns. Late in the movie, when Mark Ruffalo’s Mike raises his voice in protest in the Spotlight office, it feels like somebody fired off a gun. The movie is a lot of talk, but the talk is riveting and the actors believable. It’s solid ensemble work all around. Who would have thought that four people in an office could generate such interest? 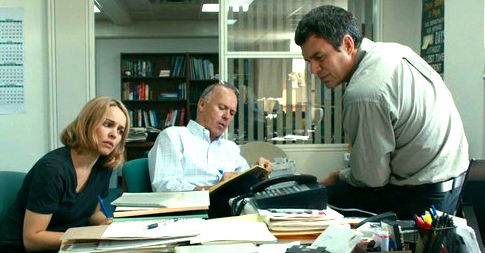 Director McCarthy manages to keep us more than interested. The team members collect data, follow small clues, do their homework, and resist constant entreaties to desist by people who say things like, ‘Why are you attacking the Church, when it does so much good?” Sacha’s interviews reveal that the priests preyed specifically on boys from troubled homes, often without fathers. The overwhelming cultural trust and respect for priests did the rest. Several victims ask, “How do you say no to God?” Meanwhile, the pedophile priests molest boys with impunity. When caught, the church and its lawyers squelch the incidents with quick cover-ups. Parents are too cowed by the church authorities to protest.

Is the film an attack on the Church? You bet it is. The Church abets and covers up criminal activity on a grand scale. The Church is openly arrogant and proud of its power. We see none of the crimes being committed, but we do see a priest being sprung from jail, with no record made of his crime. It is played identically to scenes in old gangster movies, where assassins are released from custody and potential squeaks are greased with mob money. The script isn’t afraid to throw down the gauntlet. The lawyers that stonewall are accused of converting the legal cover-ups into a gold mine — taking a cut of Church money to silence the victims “turns child abuse into a cottage industry.’

Anybody that has faced peer pressure trying to do something against the social grain will recognize the kind of power arrayed against the Spotlight group. The paper’s personnel are hit with civic pressure, old-school pressure, anti-Semitic pressure. Even after Ruffalo’s Mike finally gets legal access to the essential public records, a clerk bars his way. Boston is 53% Catholic, and fiercely so. Nobody wants the Church investigated. 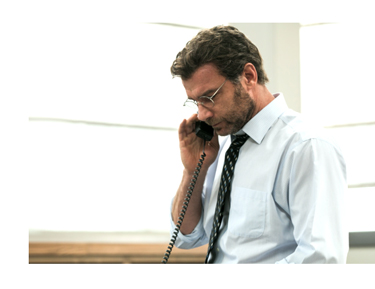 The Cardinal is himself hands-down guilty of crimes that would put an ordinary citizen in jail for years. The Cardinal entreats Baron to work with him as a team, which really means fall under Church control. It’s like a mob that has a hold on the city. How the decades of molestation stayed an open secret is spelled out clearly — everybody minds their business and the big picture can’t be seen until the story comes out. Most every authority in the city is implicated, especially the good-old-boy political power structure.

Even the Spotlight investigators are shaken by the revelations. Spotlight is ordinary people trying to do the right thing, to be good journalists. Of course they want recognition, but they choose their subjects for merit, not opportunity. Mark Ruffalo of Zodiac is again a bulldog. His Mike doesn’t back down from saying what he thinks, even when he must contradict a judge on an ethical issue. He has the strength to maintain his composure when provoked by a civil servant who obstructs a proper request for public records. Rachel McAdams’ Sacha Pfeiffer does the canvassing, and shows remarkable tact talking to meek souls, like the sympathetic victim played by Michael Cyril Creighton. He’s just free of an alcohol problem exacerbated by his experience with a predatory priest. The shame of victimization works in favor of the Church maintaining its stance of moral ascendancy — the Church puts forward the notion that staying silent does ‘good’ by not undermining the public faith. Sacha happens upon one molester-priest who is now senile, and who readily admits having molested boys, but that he never took pleasure in it. When the man’s caretaker shows up, Sacha gets the door slammed in her face.

Allowed to downplay his character, Michael Keaton comes off well, not half showing the years that have elapsed since Batman. When he has to hold the story back — for a wasp’s nest of political reasons — his Robby seems the soul of responsibility. John Slattery has a less demanding part as the next man up the chain of command. We’re happy that the screenplay didn’t eliminate his character, for simplifying things could have reduced the political climate at The Globe to something akin to The Daily Planet. Liev Schreiber ↑ is also perfectly cast. We’re expecting him to chicken out or lose interest in the story, but his Marty Baron demonstrates unyielding patience and bureaucratic stamina. Challenged by the publisher and the Cardinal to justify his ‘rash’ position, Baron answers in just a few choice words that say, “there’s a right thing to do here, and I’m doing it.” How come I’ve never worked for an executive in a film company with that ethic? 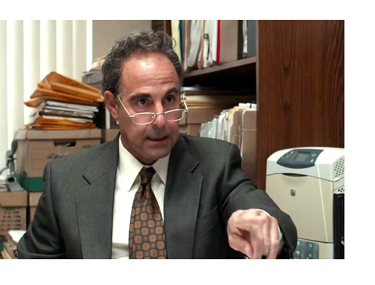 ← Stanley Tucci steals every scene he’s in. His character initially seems to be a pain in the A, yet is eventually revealed as a genuine, committed do-gooder. The actors playing the ‘protectors’ of the Church, for money or social approval, are beautifully cast. People wanting to take worthwhile action within certain social structures are often stopped not by villains, but by the ‘advice’ of some ‘Pete Conley’ guy as ingratiating as actor Paul Guilfoyle, who stifles good ambitions but is actually protecting somebody else’s Red Wagon.

Once or twice somebody mentions bad things that might befall infidels that offend ‘higher powers,’ and even Conley infers that Robby might end up a victim in a dark alley one night. Frankly, it makes me feel at least a little good that the Church didn’t actually consider killing people. Big thanks for small favors — I guess we can be glad that the Church and The Mob didn’t link up in that way. The cheap hoods in things like The Captive City don’t stop at murder, and they have far less at stake.

Savant has been known to shed tears over films that celebrate American journalism, an institution that can be as corrupt as any other yet was once the lifeblood of the nation. Samuel Fuller’s most patriotic movie is Park Row, a Valentine to the honorable/yellow press. That the sources of news and information for America are being cut down, controlled and centralized should be of major concern to us. If Spotlight doesn’t convince viewers — even devout Catholics — of the value of a free, independent press (and broadcast news), I don’t know what can.

Universal Studio Home Entertainment’s Blu-ray + DVD + Digital HD of Spotlight is the expected pristine encoding of this (I think) shot-on-digital video feature. Tom McCarthy and cinematographer Masanobu Takayanagi have nailed the docu-drama format — scenes are resolutely naturalistic yet always attractive. Real streets and locations are always shown in context, and if I’m being fooled by clever video compositing, I can no longer tell. We’ve come a long way from opening scenes with a shot of a city landmark, to remind us where we’re at. It almost doesn’t matter if the editorial rooms of the Globe are a location or a set, for the ‘reality’ of what we see is never in question.

The extras consist of three short (six to fifteen minute) featurettes with promising titles (see below). They come down to neatly edited sound bites from the stars, illustrated with clips from the movie. I’d have liked to see a piece with the production company’s lawyers, explaining the legal minefield that had to be negotiated to tell this story so fully… did they have to leave anything out? It does seem interesting that the ex-priest in another city, the expert studying pedophile priests, is only heard over the telephone, and not seen in person.