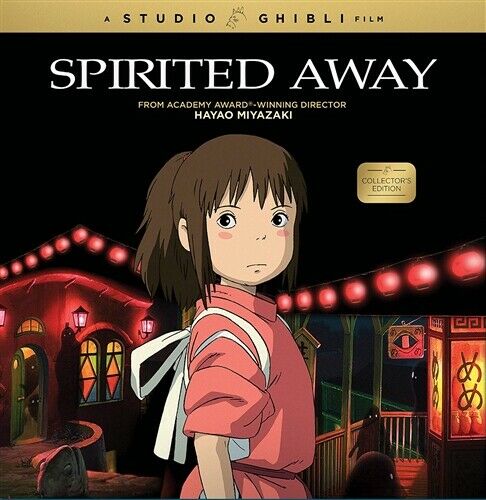 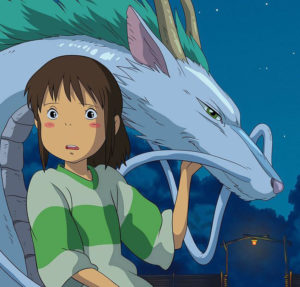 The story of a lonely child lost in a beautiful and bizarre dreamscape, Spirited Away naturally begs comparison to Alice in Wonderland and The Wizard of Oz. But in contrast to those frenetic classics, Hayao Miyazaki’s masterpiece is cooly meditative – a serene head trip.

At first sight Miyazaki’s Wonderland is not so wonderful – it’s an abandoned theme park discovered by ten year old Chihiro and her parents at the end of a secluded country road (Miyazaki’s version of a rabbit hole). Though the paint is peeling and the sidewalks cracked, the barren mall maintains a suspiciously well-stocked food court. Chihiro’s folks dig right in and find out the hard way that there’s no such thing as a free lunch – soon enough mom and dad are transformed into pigs and Chihiro is possessed by a pagoda full of phantoms. 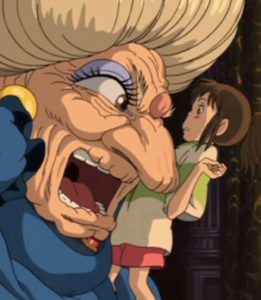 With the help of a wiry young wizard named Haku, Chihiro adjusts quickly to her extraordinary circumstances.  She finds work in a bathhouse run by a witch named Yabuba who offers the young sprout a contract that’s more like a death warrant – in exchange for food and shelter, Chihiro must sign away her memory along with her name. Like the hero in a Greek myth, the child, now called Sen, is made to perform a series of Herculean tasks in order to regain her identity.

The bathhouse rests in the heart of the amusement park but it’s no sideshow attraction – it’s a lofty temple where the phantoms convene to restore their energy, basking in the healing water and gorging on the rich food prepared by Yubaba’s servants. The ancient spirits are best known as Kami – divine entities that contain the energy of the universe. Chihiro first spies them debarking a ghostly ferryboat – a visionary sequence that is one of the more astounding spectacles in movies – the slow march of otherworldly creatures draped in brilliantly colored costumes is like a Mardi Gras parade choreographed by Timothy Leary. 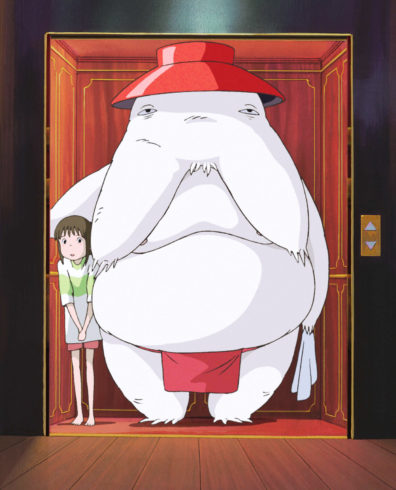 The Kami are a varied lot, some nearly human while others are run-of-the-mill frogs with large vocabularies – many would not be out of place in one of Giuseppe Arcimboldo’s anthropomorphic portraits. In spite of their outrageous appearance, the unearthly menagerie is even more repelled by Chihiro’s presence but purely for philosophical reasons – she’s not just any outsider, she and her gluttonous family are modern day Japan bigfooting the sanctity of Mother Earth.

The cast is large and the attention to detail is microscopic but Miyazaki’s storytelling is as lucid as the freshwater lake that runs beneath the bathhouse; he juggles what could have been an overloaded circus of eccentrics with the facility of Charles Dickens marching his own picturesque characters across the page. The tale is anchored by two figures who couldn’t be more dissimilar – Chihiro’s adversary Yabuba – a short, stout and very loud sorceress with an enormous head as big as her body – and the young lady’s wispy silent partner, No Face, a transparent shroud with a Noh mask where his face should be. 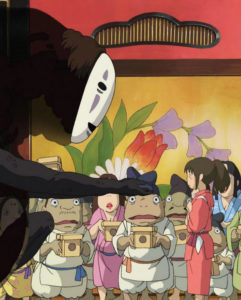 The glue, if you will, that holds all this together is Miyazaki’s deep knowledge of how action – and its absence  – informs character. There’s not a movement big or small – from Chihiro’s halting accession of a creaking staircase to the majestic swoop of a dragon as it navigates the skies, that doesn’t enhance our own understanding.

The art of animation is in Miyazaki’s blood and his inspiration comes from everywhere, from Disney’s Pinocchio and the Fleischer Studios’ Gulliver’s Travels (in 1965 Miyazaki was a young artist on Toei’s Gulliver’s Travels Beyond the Moon) to Yellow Submarine. But the artist has an affinity for the still life too; the most memorable moments in Spirited Away are distinctly Miyazakian, like Chihiro’s wordless train ride with No Face – it has the grand solemnity of an Edward Hopper hotel room. Miyazaki once explained his fondness for such quiet moments – “If you just have non-stop action with no breathing space at all, it’s just busyness, But if you take a moment, then the tension building in the film can grow into a wider dimension. If you just have constant tension at 80 degrees all the time you just get numb.” 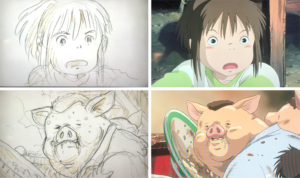 Miyazaki storyboarded each moment in the film and those fast and loose scribbles, evocative as the final product, are presented as a feature-length extra on the beautiful new Blu ray edition from GKID and Shout! Factory.

Joe Hisaishi’s exhilarating soundtrack is included on a separate cd – the music is multi-colored ear candy that creates a separate but equal movie for your mind, in particular the promenade for the ferry boat sequence, The Procession of the Spirits, which is even more rhapsodic in its purely musical incarnation.

The set contains a new 40-page book with  essays from the LA Times’ Kenneth Turan and cartoon maven Leonard Maltin. Rounding out the extras are a selection of original theatrical trailers and TV spots and a short take on the voice talent for the American release.