Silent comedy rules!  Harold Lloyd epitomizes ‘twenties optimism while serving up the fun. Even better, he filmed this on the streets of New York, so we feel as if we stepped into a time machine. The great disc extras include input from New Yorker extraordinaire Bruce Goldstein. It’s a great show for holiday viewing — unless your family hates New York. 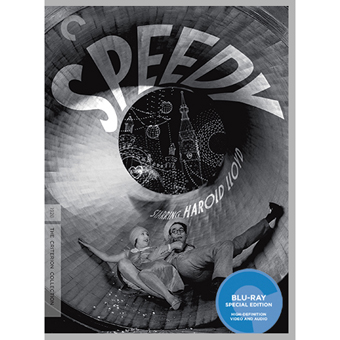 Criterion’s Blu-ray of Harold Lloyd’s 1928 comedy Speedy is a double pleasure. First, it reminds us that Harold Lloyd is a flat-out delight, as funny now as when he was the most popular film star in America. He was also and more consistently successful than Buster Keaton or Charlie Chaplin, filmmakers granted the mantle of cinema greatness. Second, it shows us just what Blu-ray and DVD discs have that streaming and downloads don’t. Watching Speedy is great, but taking in the extras by disc producer Karen Stetler enlarges the experience tenfold. I learned more about Harold Lloyd here than I ever did at film school; I learned a lot about a great city, too.

For his last silent feature, Lloyd filmed major scenes in New York, a rarity for a Hollywood-based filmmaker. Getting Manhattan for a background was worth the challenge of filming on streets teeming with onlookers. Lloyd’s screen character is consistent with his earlier films. The nice-guy underdog withstands a number of comic trials, to win the day and the girl. 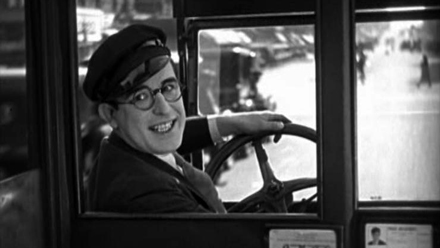 It’s lucky that the optimistic Harold, aka ‘Speedy’ (Harold Lloyd) is good at getting jobs, because he screws up or gets fired from them daily. This doesn’t discourage his girlfriend Jane Dillon (Ann Christy), as she knows Speedy wiill do well. But in the meantime she’s got problems at home. Her grandfather Pop Dillon (Bert Woodruff) runs the last horse-driven trolley in Manhattan, and a crooked railroad has hired thugs to put him out of business. Speedy hears about the scheme ahead of time, but will he be able to do anything about it?

The clownish Chaplin goes for high pathos as well as comedy, and the stoic Keaton concentrates on the clockwork of absurdity. But Harold Lloyd is just a regular guy, a go-getter, a fellow a girl might want to take to meet her parents. He’s a perfect fit in a decade of prosperity, progress and high hopes for a great future in a great country. Even a guy wearing a suit covered in paint and carrying a live crab in his pocket can get ahead if he has the right attitude. Chaplin and Keaton survive their adventures, but Lloyd achieves the happy ending every time. It’s natural that America would love Harold, even if his stardom would fade with the changed circumstances of the 1930s.

As a collection of gags Lloyd’s film doesn’t break new ground. Speedy’s attempt to be a taxi driver fails miserably, even when he gets to meet his idol, and that of America, New York’s Babe Ruth. The Sultan of Swat gives what’s probably his best screen performance, just reacting to a wild Manhattan cab ride. Speedy takes his girl to Coney Island, to share a tall stack of gags with a solicitous stray pooch, and the aforementioned crab. Lloyd’s gags stay in character because they reference social interactions — accidents make people laugh at him, or blame him for various offenses. He’s never malicious. He often doesn’t know why people are laughing at him, as when he accidentally has a piece of ladies’ underwear hanging from his pocket (no overt gay jokes, though). Lloyd’s essential innocence is like a shield — he knows he’s a good guy, cares what people think, and keeps trying to please them. Speedy’s future father-in-law likes him, his neighbors like him, and even a dog likes him. In the film’s most telling moment, Speedy and Jane hitch a ride in the back of a furniture truck. They rearrange the furniture for comfort, assembling a cozy spot by the fire, with a pair of slippers and one’s missus by one’s side. It ends with a vision of babies in a bassinette, surely the dream of a million working class Americans. 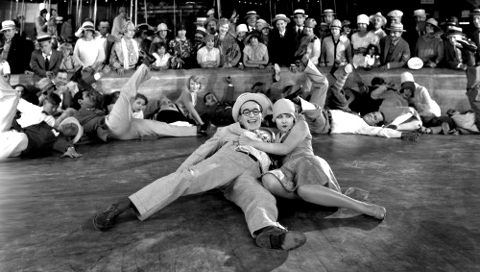 Speedy is free of race jokes, something fairly rare for the 1920s. No blacks appear, but Lloyd and his writers invent a Lower Manhattan neighborhood that’s a harmonious melting pot of immigrant cultures. When it comes time to fight the gangsters – thugs as benignly inept as Beagle Boys — a battalion of old geezers of multiple nationalities rallies behind our boy. Many are Civil War veterans! Lloyd not only films in New York, he tries to capture a vision of its character — big league baseball, immigrant vitality, a job for anybody who wants one. The fantasy of the Big Apple circa 1928 is complete.

As emphasized in the disc’s exceptional extras, Speedy serves as an incredible time capsule of New York. Speedy ranges all over the island of Manhattan, from Times Square (where Norma Shearer’s MGM movie The Student Prince in Old Heidelberg is playing) to the streets below the big bridges, down to Washington Square in Greenwich Village, to the Wall Street district. We get a real feel for the city, and in this sharp restoration, practically every scene can be stopped to examine street and business signage. 1928 is before the Empire State Building. Remember the CGI views of the elevated train taking a sharp curve above Third Street in Jackson’s 2005 King Kong? The real thing is here, from the same angle, and it looks just as unlikely.

I’ve only been to NYC briefly but thanks to the movies feel like I know some of the topography. I imagine New Yorkers will love to see their town examined so closely, at such leisure. Some of the streets barely look paved and others have curbs so crumbled that they might have been built in the 1880s. Maybe the same imperfections in the sidewalks are still there today? 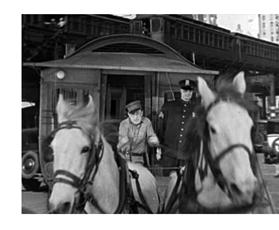 The trip to Coney Island is especially fascinating. All those terrific wooden rides that look like invitations for lawsuits — people flung from spinning discs or sent careering head over heels down bumpy slides. A ‘wavy floor’ ride looks like an invitation to some kind of injury. Nothing looks safe — they’re riding wooden horses through the air, without a safety net.

Some of the chase shots through downtown employ early traveling mattes. The film composites are limited by the dupe film stock available, yet the shots are quite sophisticated in design and execution. Speedy is low on daredevil stunts but high on laughs. I smiled all the way through but laughed out loud at least three times, watching alone (not good for maximum enjoyment). The happy ending is no surprise, and we wouldn’t have it any other way. It’s an example of pure movie joy.

Actually, the finale points up the contrast between Harold Lloyd, Buster Keaton and Charlie Chaplin. Chaplin’s version would in total failure, but he’d walk off into the sunset with the girl. Keaton would save the trolley line, but the victory would be absurd: we’d flash forward a hundred years to see him still operating it when there’s no reason for a trolley to exist. Harold Lloyd is a practical ’20s guy — who cares about an old trolley? He sells out for a big payday that fulfills his material dreams. The crooked status quo is not disturbed.

The Criterion Collection’s Blu-ray presents Harold Lloyd’s Speedy in an immaculate HD scan, newly restored in 4K by the UCLA Film Archive. Lloyd produced most of his own work and preserved it all beautifully — he spent the second half of his life on hobbies like 3-D photography. Speedy is in such good shape that it seems hard to believe that it is 87 years old. Carl Davis’s lively score was recorded in 1992. Davis must have had a good contract because he’s given special credit both fore and aft.

When one personality dominates disc extras the effect can be confining. But Speedy taps the great Bruce Goldstein of New York’s Film Forum. I saw him introduce No Orchids for Miss Blandish one wild night back at the TCM Fest, and he was a hilarious ball of energy. In a much calmer mood, Goldstein gives his attention to a full commentary, shared with TCM programming director Scott McGee. He then produces and hosts a half-hour tour of New York, comparing Speedy locations then and now. It’s much more than a before and after show, as Goldstein imparts a wealth of information about the way the city has changed, its modes of transportation (so that’s what the ‘IRT’ is) and tons of history and pertinent ephemera. His photo comparisons reveal that many of Speedy’s street scenes were actually filmed in Los Angeles — proving the point with telltale evidence like street lamps. Speedy’s neighborhood was filmed in a giant set built on a huge parcel of undeveloped land in — gulp — Westwood. 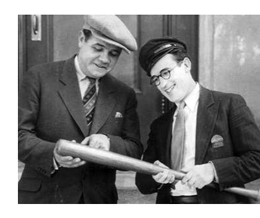 UCLA provides the raw material for two more choice extras. David Filipi hosts a 40-minute look at Babe Ruth, as seen in movies of the day. It’s beautifully organized, better than anything I’ve seen on the famous Yankee star. And UCLA’s restoration of Bumping into Broadway, a 1919 Lloyd two-reeler, is newly restored with a score by Robert Israel.

Capping the package is seventeen minutes of Harold Lloyd’s home movies, which look like they were filmed in 35mm. Some use professional sync sound! His granddaughter Suzanne narrates the footage, which shows her mother as a baby at their first Los Angeles house, at 5th and Irving, less than a mile from Savant Central. We then see Lloyd’s Hollywood Hills estate and their villa on a prime stretch of Santa Monica Beach, a stone’s throw from the California Incline. Lloyd comes off as an average guy all right, with a big heart, plenty of love for his kids, and a lot of money.

Perhaps to better afford the lavish video extras — all produced at an optimum of quality — Criterion has replaced its insert booklets with foldouts. This one has an essay by Philip Lopate, with plenty of insights into Lloyd’s theory of comedy. And what terrific cover art! We need more access to Criterion artwork posters.

Savant, or just Glenn, likes feedback and answers all notes, corrections, inquiries and stern warnings.
Write me at dvdsavant@mindspring.com .