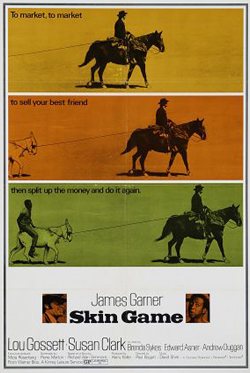 Coproducer James Garner channels his winning Maverick persona as a pre-Civil War con man whose partner Louis Gossett Jr. poses as his slave. The two travel around “selling” Gossett to various slaveholders, then spring him and move on to the next mark. It’s a comedy, but a fairly serious-minded one. The familiar backlot and supporting cast mark this as a typical Warner Bros. product of the time, rather flatly directed by TV vet Paul Bogart. This trailer is pan-&-scan, but the Warner Home Video disc is available in anamorphic Panavision.