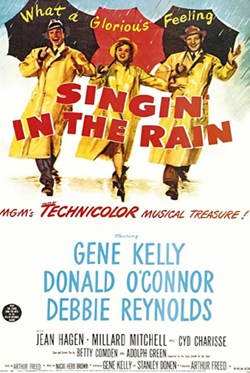 Singin’ in the Rain

Close to perfection. Directors Stanley Donen and Gene Kelly assemble a peerless cast and crew to satirize and celebrate Hollywood. Set at the moment when sound came to motion pictures and turned the industry upside down (sending more than a few actors to the unemployment line), 1952’s Singin’ In The Rain seamlessly integrates its songs into its storyline, but even without those buoyant musical numbers it would still be one of the funniest movies ever made, thanks to Comdon and Green’s ingenious screenplay. Co-stars Debbie Reynolds, Donald O’Connor (in a sidekick role intended for Oscar Levant), and especially Jean Hagen, as the overbearing star with the voice to match, were never better. The title song had appeared previously in The Hollywood Revue of 1929 and 1940’s Little Nelly Kelly. Recycling never looked so good.