It’s in glorious Technicolor Metrocolor, CinemaScope and StereoPhonic Sound! Fred Astaire’s final MGM musical gives him Cyd Charisse and a Cole Porter score, plus some nice Hermes Pan choreography. The script and Rouben Mamoulian’s direction aren’t the best, but the combined magic of the musical and dancing talent saves the day. 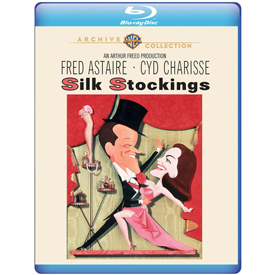 On the Town?  The Pajama Game?  Damn Yankees?   The Warner Archive Collection’s next musical up for the boost to Blu-ray may not be the best choice overall, but it does have some great performances and music. It’s also Fred Astaire’s last MGM musical, and he’s as impressive as ever. 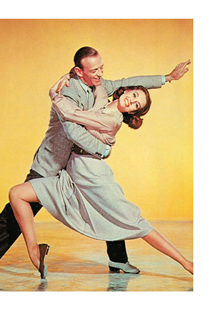 Silk Stockings revisits one of the top classic romantic comedies of the 1930s. American movie producer Steve Canfield (Fred Astaire) lines up star Peggy Dayton (Janis Page) for his bowdlerization of War and Peace to be filmed in Paris. He snags Russian composer Peter Boroff (Wim Sonneveld) to handle the score, which causes an uproar in Moscow. Bumbling emissaries Brankov, Bibinski and Ivanov (Peter Lorre, Jules Munshin and Joseph Buloff), sent to retrieve the composer, are quickly seduced by Canfield’s Capitalist trickery, but the Russkies’ next agent is a hard-nosed Commie troubleshooter, Nina Yoshenka (Cyd Charisse). A real idealogue, Yoshenko attempts to wrap things up quickly. The frigid comrade is a tough nut to crack, but the charming Canfield has the romantic allure of Paris on his side.

The same year’s Les Girls may have been representative of the MGM musical on the downslide, but Silk Stockings is the end of the line. The Kaufman, McGrath & Burrows Broadway musical sidestepped Lubitsch’s classic Greta Garbo comedy Ninotchka by adapting the musical play made from it. It still comes off as retread of the Garbo classic.

With MGM in its waning years, Silk Stockings is a mix of weak and strong elements. The jokes aren’t particularly clever and Rouben Mamoulian’s direction is almos non-existent. The cast stays spread across the screen in wide shots, as if Mamoulian were afraid of the CinemaScope framing; every interior seems enormous, even a cramped Moscow apartment. Only a couple of choreographer Hermes Pan’s musical numbers really come to life visually. Seeing Cyd Charisse and Fred Astaire perform their smooth moves is always pleasant, even if some numbers seem partly recycled from old favorites. If you loved them in The Band Wagon you’ll be happy to see them again, but neither is in top form.

The notion of Fred Astaire being ‘too old’ for this show is foolishness, for he continued to dance on TV specials and ten years later was still as charming as ever. But the stiff screenplay does Cyd Charisse no favors. Playing the old Garbo role, she comes off as even more stiff and mechanical than usual — when she’s not dancing her legs off, she simply hasn’t the needed presence or magnetism to overcome the flat lines. The romantic transformation of Comrade Yoshenka is so badly handled, it feels like someone threw a switch. Charisse is of course pleasant to look at, but supporting comedienne Janis Paige’s sexpot movie star gets almost equal emphasis, by default. It’s an interesting problem, as Charisse comes off like a champ in The Band Wagon and It’s Always Fair Weather without having to flex any acting muscles. (Hey — It’s Always Fair Weather — that’s a Sunset MGM musical that really works.)

The retooling of the 1930s satire of Stalinist repression and purges also feels sour. The edgy comedy of Ninotchka was daring in 1939, making light of Russian events in which tens of thousands were being liquidated yearly. Lubitsch (and his writers, including Billy Wilder) was playing progressive Black Comedy games that later turned a weird corner in the amazing To Be or Not to Be. The satirical content of Silk Stockings is flattened into cheap Cold War sneering, using jokes two decades old. The ‘cute’ defecting Comisars just aren’t very charming, not even Peter Lorre. Reviewers always praise Lorre, even though he’s completely useless here. Perhaps, as their minds wander, his presence reminds them of other good movies. Lorre is better in Irwin Allen’s star-wasting movies, even Voyage to the Bottom of the Sea. And then there’s Jules Munshin, a comic talent who was pretty charming in On the Town. He doesn’t fare any better as a Comisar corrupted by the decadent West.

Four years later, Billy Wilder would elaborate on a similar concept for his hilarious One, Two Three, by satirically trashing the Russians, the Germans and the Yankees all at the same time. In Silk Stockings, the jokes just belabor the same points about the Soviet Union..

Yet Silk Stockings still has its strengths. Although mostly disbanded, Arthur Freed’s musical unit generates marvelous orchestrations for Cole Porter’s mostly comic songs. Several are memorable, including one that seemingly blames the demise of the Hollywood studios on wide screens and stereophonic sound. It’s Janis Paige’s standout song, even though the direction is as flat as can be. She and Astaire are often marooned in the middle of a wide, empty CinemaScope screen.

Gene Kelly attempted to be hip in a Les Girls parody that pretended that Marlon Brando and method acting were a passing fad. For Astaire’s last MGM musical number, Silk Stockings likewise takes a defensive, somewhat bitter choice of lampooning the ‘fad’ of Rock ‘n’ Roll, which of course eventually buried the great songwriting and melodies of composers like Cole Porter. Naturally, Astaire makes a showcase of the number, turning the monotone lyrics and jerking gyrations into something elegant. He finishes the song by crushing his iconic top hat, perhaps as a gesture to his departure the Hollywood musical.

All of You is the romantic standout. Astaire’s singing is as good as ever. His romantic dances with Charisse use the same moves as seen in their earlier Dancing in the Dark duet, which are of course just as charming. Hermes’ Pan’s biggest dance number for Charisse is Red Blues. It’s an impressive blast of dancing for a large ensemble; parts of it look as if they were recycled from the Pass that Peacepipe number in Good News, just as one of Cole Porter’s comedy songs for Janis Paige seems awfully similar to a song from Kiss Me Kate. Just the same, the music score has plenty of the old ‘zing,’ thanks to the efforts of the great composer-arrangers Conrad Salinger and André Previn.

As stated, Janis Paige is delightful, while most everyone else has to deal with the weak Cold War jokes. George Tobias plays Yoshenka’s Comisar boss in Moscow as a big corrupt Teddy Bear, and comes off okay. We can also spot the interesting Belita (Suspense) as Tobias’ ballerina girlfriend, and future Astaire dancing partner Barrie Chase as one of the call girls hired to entertain Peter Lorre & Company. Remember Kaaren Verne from Warners’ Kings Row?. She’s on screen for about three seconds, as a Moscow mail carrier.

Silk Stockings was in production for four months, much of which was probably rehearsal. The non-dancing scenes are lacking in polish. I’m not up on the full career details of Rouben Mamoulian, but his last really big show was Blood and Sand from 1941; he was replaced on his next two pictures, which made this show his last feature credit. He was an amazing innovator in the early sound period, but his biggest successes were on Broadway.

Silk Stockings isn’t a favorite but I have to admit that there was a lot to enjoy in it this go-round. So if you haven’t seen the picture, don’t write it off. You might like it — millions do.

The Warner Archive Collection Blu-ray of Silk Stockings bests what was an already good DVD transfer from thirteen years ago. Robert Bronner’s cinematography always seems to be across the room from the actors, but the color is excellent and the image free of CinemaScope distortion. Audiophiles will appreciate the 5.1 track, which is lush and strong.

The late Cyd Charisse hosts a featurette on this Cole Porter Collection title, reciting facts about the composer as well as the production itself. Also included are two short subjects, a 1934 Cole Porter musical featurette called Paree, Paree with an under-ripe Bob Hope (!), and one of those ponderous MGM Orchestra monstrosities, The Poet and Peasant Overture. The disc is encoded with just the English track and English subtitles. The cover art is a direct repeat of the old DVD poster design.