Success in the ’90s gave Robert Altman the opportunity to experiment once again. Several short stories by Raymond Carver interlock in a mosaic of Los Angeles populated by scores of actors in ensemble mode. Clocking in at three hours, Altman’s epic has all the time and space it needs. 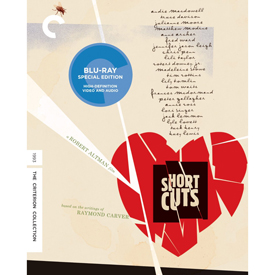 The great maverick director Robert Altman is now ten years gone, yet reviewing his film career reveals many happy surprises. His 1955-’56 The Delinquents filmed in Kansas City now seems very accomplished, and his unhappy space race movie Countdown (1967) plays as inspired, considering how little it has dated. There are still the quizzical unwatchables like Quintet and O.C. and Stigs and a fistful where his ‘scope telephoto lens stay 50 feet away and hose down the set’ technique grates terribly. But a few eccentric pictures now seem better than when they were new. One of them is this long-form feature that feels like eight intense short stories, woven into a three-hour amalgam of interesting incident. I’m not sure it captures any Los Angeles vibe I ever experienced in 45 years in residence, but I never participated too much in the town’s marginal madness. 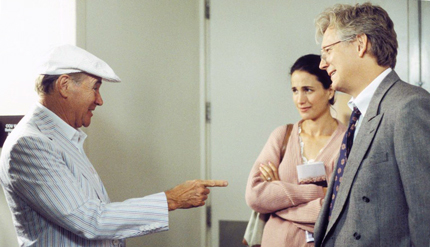 Flush from the success of The Player, Robert Altman wasted no time in experimenting with more idiosyncratic movie material. He immediately tackled the job of reshaping a stack of moody short stories into a larger tapestry populated with a couple of dozen leading players, something like, you know, a classic Robert Altman film. Actually, Altman’s famous ensemble films tended to loosely gather a pack of kooky characters around some major event and let them go off on various tangents. Short Cuts is neither improvised nor random, but a careful interweaving of a several unrelated tales.

Altman and co-writer Frank Barhydt do their darndest to replicate the capricious nature of Raymond Carver’s short stories; we never know whether a particular incident will become central to the narrative, or just be abandoned on the side. The film starts and ends with quintessential Los Angeles events, the spraying of Malathion to suppress the Medfly and a heavy-duty earthquake of the kind that takes Angelenos by surprise every twenty years or so. 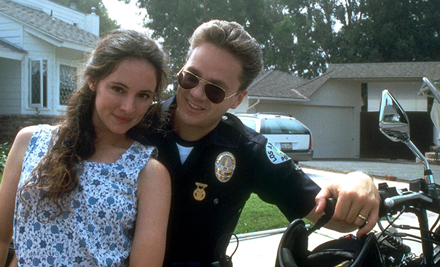 A rough synopsis can only suggest the film’s complexity. Waitress Doreen Piggot (Lily Tomlin) hits a child with her car, and frets when he runs away claiming he’s unharmed. The kid then falls into a coma, which sends his parents Ann and Howard Finnigan (Andie MacDowell and Bruce Davison) into a panic that isn’t helped when Howard’s estranged father Paul (Jack Lemmon) suddenly chooses to come back into their lives. Unemployed salesman Stuart Kane (Fred Ward) and his wife Claire, a children’s party clown (Anne Archer) make a dinner date with the Finnigans’ doctor Ralph Wyman (Matthew Modine) and his artist wife Marian (Julianne Moore). Stuart takes off on a fishing trip with two buddies; they find a dead woman’s body in the river but wait two days to report it, until they’ve caught their limit. Phone-sex worker Lois Kaiser (Jennifer Jason Leigh) doesn’t realize her job is having a negative effect on her husband Jerry, a serviceman (Chris Penn) who cleans the pool of nightclub singer Tess Trainer (Annie Ross), whose daughter Zoe (Lori Singer) plays the cello and is deeply concerned about the Finnigans, her neighbors. Jerry Kaiser is also a best friend of a makeup artist, Bill Bush (Robert Downey Jr.) who cheats on his wife Honey (Lili Taylor). Finally, divorced mother Betty Weathers (Frances McDormand) is seeing married policeman Gene Shepard (Tim Robbins), much to the consternation of Gene’s wife Sherri (Madeleine Stow) and Betty’s ex Stormy (Peter Gallagher), who happens to be one of the helicopter pilots spraying Malathion (Peter Gallagher).

The tangles continue. Sherri Shepard is a friend of Marian Wyman. Claire Kane gets her birthday cakes from the same unhappy baker that the Finnigans frequent, Andy Bitkower (Lyle Lovett). Honey Bush’s photos of her husband’s gruesome make-ups get switched with the snapshots of the dead body in the river taken by Stuart Kane’s fishing pals Gordon and Vern (Buck Henry and Huey Lewis). The fishermen also like to stop at Doreen Piggot’s cafe to ogle her short waitress dress, much to the consternation of Doreen’s alcoholic husband, Earl (Tom Waits). 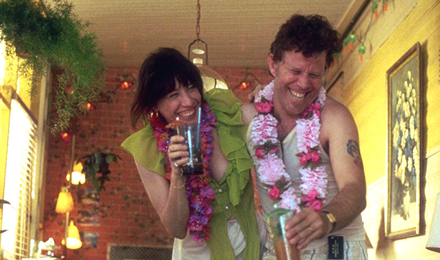 That tangled mass of relationships explains why the whimsically titled Short Cuts is three hours long. The beautifully crafted film interweaves its various subplots without bothering to make its frequent character intersections any more meaningful than the random nature of life itself. The effect is a sprawling mosaic of Los Angeles life, from the unemployed folk through the wannabes up to the more successful citizens in their hilltop houses. 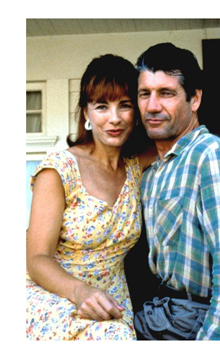 To say the characters are richly drawn is an understatement. The talent arrayed here is staggering, and there isn’t a poorly chosen character in the bunch. Tim Robbins plays an atypically obnoxious cop, while Jennifer Jason Leigh’s porn-spouting young mother is certainly disturbing. And one can feel the inner conflict in Anne Archer’s disappointed wife, or Frances McDormand’s desperate single mother. It’s all done without hype or grandstanding for Oscars. Altman’s careful direction plays to the narrative, not actor egos. He avoids showoff effects and overreaching dramatic fireworks. The movie is stylish, insightful and coherent. I personally prefer its vison of a flaky, morals-challenged City of the Angels to the awkward liberalism of Grand Canyon and the brutal, overcooked potboiler Magnolia. This really feels like parts of Los Angeles I know — even the Hollywood Hills. It’s nostalgic to see newscaster Jerry Dunphy again, and amusing to glimpse Alex Trebek at a concert.

It was easy to take potshots at some of Altman’s ’70s films, many of which (Nashville, Buffalo Bill and the Indians) seemed to be directed by training five telephoto cameramen on a complicated scene, saying ‘action,’ and trying to stay in focus. In Short Cuts Altman has opted to go for a carefully controlled illusion of random events, as opposed to the disorganized real thing. Cuts do more than just recharge scenes that have run dry. Subtle character reactions are carefully nurtured while broader actions, like the Finnigan boy’s accident, are covered in unbroken long takes.

There’s a lot of sex in the film, both wayward and faithful. In most of the pairings at least one partner is looking for happiness or fighting boredom. The more unstable characters played by Robert Downey Jr., Chris Penn, Peter Gallagher and Tim Robbins demonstrate that they’re capable of violence, creating an uncomfortable tension. Altman keeps this all on the boil. If he has an Achillies heel for content, it is probably his preference for frequent female nudity. The film’s success can be measured in the fact that it does indeed play as a series of interlocking short stories, little slices of drama that can change from the absurd to the tragic on a moment’s notice, all tied together with smoky jazz music from Annie Ross and the Low Note Quintet. 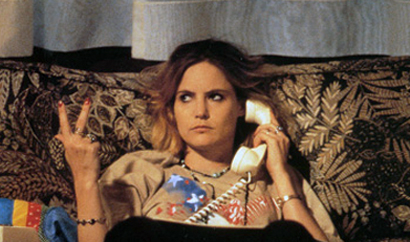 The Criterion Collection’s Blu-ray of Short Cuts is the expected polished presentation. We’re told that cinematographer Walt Lloyd approved the new 4K digital transfer. Two soundtrack options are offered on the Blu-ray, plus an Isolated Music track with Gavin Friday and Mark Isham’s film score. The feature is by itself on the first Blu-ray disc, and the extras on the second.

Criterion’s Robert Altman discs as a rule have no lack of good extras, often with director Altman himself. This Blu-ray has most of the contents from the label’s 2004 DVD. Altman appears in a lengthy taped conversation with Tim Robbins, and in a feature-length making-of show. The old DVD included a reprint book of Raymond Carver’s Short Stories, and a BBC docu about the adaptation; it’s been replaced with a PBS biographical piece on Carver called To Write and Keep Kind.

The extras continue with some song demos performed by Dr. John, several deleted scenes, and a look at many proposed marketing campaigns for the movie. The insert essay is by Michael Wilmington.