It’s 007 in the saddle! Sean Connery didn’t become a career cowboy but his one stint as a Louis L’Amour hero is a diverting change of pace. And we couldn’t resist the pairing of two of moviedom’s most attractive actors — Connery and Brigitte Bardot. 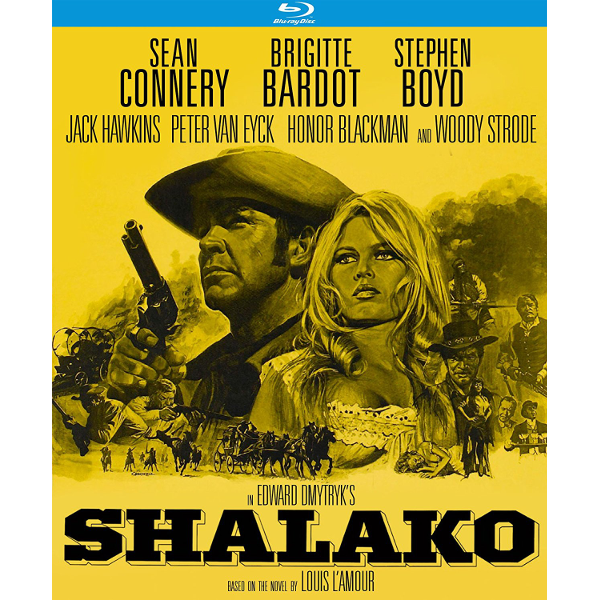 It’s true, after five consecutive James Bond movies we weren’t exactly ready to see Sean Connery as an American cowboy hero. Yet the pride of Edinburgh comes across fine in the Almeria-shot Shalako (1968). It’s just that we could tell that we were watching an English variation on the Italian ‘spaghetti’ westerns that had conquered the Yankee box office. A tea-and-crumpets western, perhaps? 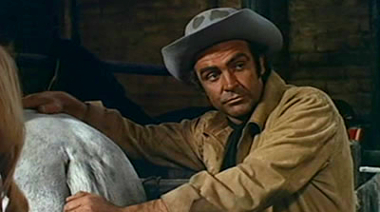 Connery is certainly big enough to follow in the footsteps of the other  single-name rogue westerner heroes, Alan Ladd’s Shane and John Wayne’s Hondo. Ex-soldier and Indian fighter Shalako comes with his own theme song, sung by a male chorus. By 1968 only Ennio Morricone was getting away with such things, and only in an overdone, radical way, as in his screaming-loud Navajo Joe. Connery’s Scots accent isn’t that much of a problem, as he certainly sounds different than the English accents around him. His speaking style is like Type ‘O’ blood — he’ll use the same brogue for a Pennsylvania miner or a Berber pirate, and we’ll buy it. Just seeing the ads placing Connery opposite Brigitte Bardot was enough to motivate a ticket purchase.

The writers were two actors and one composer, but the screenplay makes basic sense and the dialogue is not bad. For a basic survival story about foolish greenhorns saved by a wise westerner, Shalako is less pretentious than Martin Ritt’s Hombre but a little more brutal. A group of titled Europeans are on an ‘American Safari’, camping deluxe with a retinue of hired cowboys led by the unscrupulous Bosky Fulton (Stephen Boyd). The highest-ranking royal is Countess Irina Lazaar (Brigitte Bardot), a glamorous but sensible woman who’s also a good shot. Courting her is the casually arrogant army officer Frederick Von Hallstatt (Peter van Eyck). He foolishly discounts the threat posed by the Apache Indians, on whose reservation the expedition is trespassing. Sir Charles and Lady Daggett (Jack Hawkins & Honor Blackman) are upset that Irina is giving Frederick the cold shoulder; they’re broke and are counting on a marriage to save them from a shameful bankruptcy. Washington lobbyist Henry Clarke (Alexander Knox) curries favor with everyone, reminding them that he was once a potential vice-presidential candidate. Henry’s wife Elena (Valerie French) appears to be of Spanish descent. When the Apaches threaten the safari Frederick rejects Shalako’s advice; not much later Bosky and most of the hired cowboys run away, taking with them most of the food, water and weapons. When Shalako returns, he must find a way to lead the marooned Europeans to safety, on foot.

For a big star trying to free himself from a strait-jacket called ‘007,’ Sean Connery didn’t do badly. Other projects were comedies or dramas, and it never hurts to make good in a high-profile western. Shalako is well directed and handsomely filmed, on some arid-looking Spanish desert locations; not everything is a familiar sight from a Leone picture. As the only civilization on view is an abandoned way station, the novelty is seeing the royals roughing it in fancy clothing, living in tents but riding in a stagecoach and dining formally. Their one servant Mako (Eric Sykes) must be pretty efficient. He takes care of all their needs, putting together the meals and all in high style.  Frederick appears to have a military aide or two, and that’s it.

Director Edward Dmytryk was nearing the end of a stormy career marred by blacklist ignominy; his last really good movie was another western nine years before, Warlock. The crew is packed with former Connery collaborators like stunt arranger Bob Simmons, and cameraman Ted Moore, who filmed four Bond pictures. Both surely aided Dmytryk for the plentiful action sequences. Yet Dmytryk does well injecting interest into the character conflicts.

Brigitte Bardot takes the role seriously and acquits herself well. Her standard makeup with the heavy-heavy eye treatment seems a stretch. It’s a good performance. She generates okay chemistry with Connery. He seems genuinely interested, especially when Bardot does her standard peek-a-boo topless scene next to a mountain spring, playing both shy and seductive. By the way, Shalako must know something others don’t — what is all that fresh water doing atop a featureless crag in the middle of nowhere?

Peter van Eyck’s billing doesn’t reflect his high position in the story. Frederick starts off as an insufferable ass. He takes Shalako as a vulgar upstart (Trentino, eh?) and stops short of forcing a duel when the scout tells him off. Distinguishing itself from the Italian pictures of the day, the story allows Frederick and other characters to actually grow a bit, and by the finish the martinet and Shalako are in a position of mutual respect. Frederick’s suggestion that they climb a cliff face instead of hike for several miles turns out to be a lifesaver. We don’t really see all those actors doing a real rope climb, however, especially the out-of shape Alexander Knox and Jack Hawkins. Knox’s Eastern tinhorn is a bore, a style he had mastered ever since Darryl Zanuck cast him as President Wilson. Jack Hawkins looks a little frail. He’d only recently recovered from throat cancer, and is dubbed by another actor, probably Charles Gray.

The thankless role is covered by Valerie French, possibly in dark makeup. She silently endures the hardships that everyone else whines about, and is given the least to do. We’re told that Connery’s ex- co-star Honor Blackman took French’s part at the last minute, and she’s fine as a greedy woman in fear of losing her entitlements. Blackman’s Lady Daggett does to her husband what Alexis Smith did in the old atomic noir Split Second — she runs out on him with the first outlaw who comes by. That’s a really dumb move in any genre picture made to satisfy the Production Code, and as we might predict Lady Daggett ends up the focus of an uncomfortably gross Apache torture killing. Ms. Blackman has to be categorized as a game gal. She’s dragged through the dirt and must unglamorously choke on handfuls of dirt poured into her mouth, a pretty grim and sexually suggestive ordeal.

The show doesn’t quite know what to do with the comic Eric Sykes, who happily isn’t permitted to broaden his schtick. The show doesn’t become ‘Those Magnificent Indian Fighters in their Sweaty Tuxedoes.’  Stephen Boyd still had a star name but hadn’t had a decent role in years. His outright dastard doesn’t do much to atone for his villainy, and loses our sympathy. Supporting cowpoke Donald ‘Red’ Barry gives the film one link to the American Western tradition. With his background in Hollywood oaters, I can imagine the foreign crew pausing to ask Barry, ‘What would Randolph Scott do in this situation?”

Holding up the Apache end is Woody Strode as the athletic renegade Chato. In true L’Amour fashion, Shalako and Chato decide the outcome via a chivalric duel, in this case, Apache spears at ten paces, Marquis of Queensbury rules. I’m sure that Apaches settled their pesky white invader problems like that all the time.

Shalako is handsome production. I remember hearing audience chuckles during the corny Shalako vocal, and some woo-hoos when Brigitte Bardot turns the desert waterhole into a Paris boudoir. Her face and hair look fantastic, considering that she’s been walking and climbing rocks for two days in the Arizona heat! 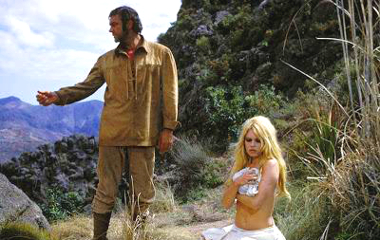 The KL Studio Classics Blu-ray of Shalako is a great-looking encoding of this entertaining show, with plenty of star interest to raise viewer curiosity. I like it now better than I did when it was new. The picture sparkles and the audio is clear. The title sequence is a little weird — it appears to be zoom-boxed, actually cutting off part of a title on the top. That I can’t account for.

Another point of interest is the audio commentary by filmmaker Alex Cox, a Brit who loves Spaghetti westerns and indulged himself directing several enthusiastic latter-day westerns of his own. Alex has plenty to say up front but his talk runs lean later on. He ends up covering things like Day-for-Night shooting, and explaining western movie traditions to viewers as if they were no longer common knowledge. Who knows, maybe the clichés do need to be re-explained. People today can’t identify Golden Age movies stars like Cary Grant.

The package finishes with a half-dozen trailers of other Kino discs of westerns and Sean Connery pictures.