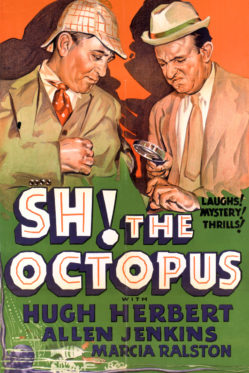 The (admittedly cultish) reputation of this 1937 comic-mystery rests on one truly startling scene. And that scene is… Ah, forget it, just watch the movie, it’s only 54 minutes long and well worth the wait. Hugh Herbert and Allan Jenkins star as two bumbling detectives facing off against a killer octopus inside a deserted lighthouse. Herbert and Jenkins rarely got top billing and for fans of that duo its worth a look-see. And then there’s that scene.