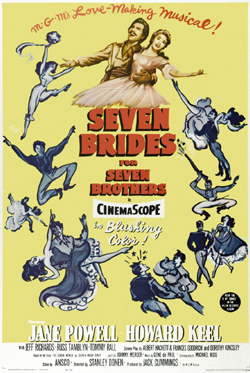 Sexual politics get the once-over as a family of Oregon mountain men decide to take ’em some wives. Stanley Donen’s slapstick backwoods musical is famed for its knockout choreography by Michael Kidd and proved immensely popular worldwide, leading to no less than five different stage shows (1979-2007), a tv series and even a 1982 Bollywood knockoff.