An American institution turns fifty, and the disc release to mark the event is a very long (almost six hours) compendium of uncut historical segments from the show, without overdubs — Disc one features musical highlights and disc two dramatic and comedic highlights. It’s terrific background material, especially the music disc with the favorite characters both human and muppet. Plus some of my nostalgic favorites — it helps if you once had a baby or toddler in your lap, clapping along with you for these things. I can’t think of a better way to honor the show, and am ready for a followup, with more favorite segments. 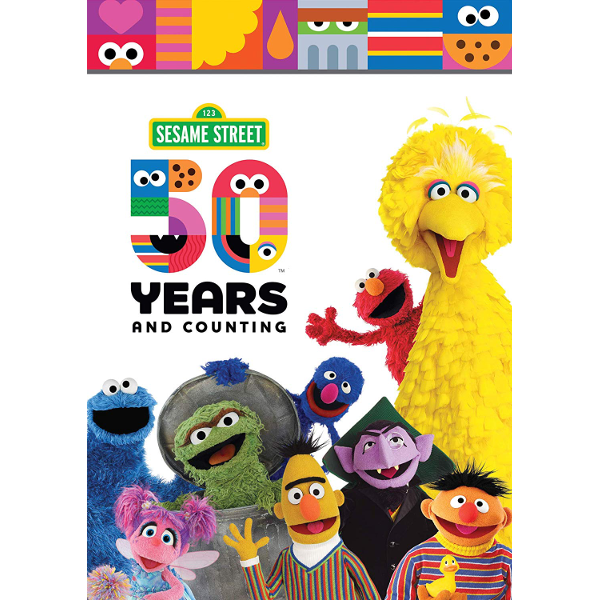 The PBS show Sesame Street, originally produced by The Children’s Television Workshop, has survived privatization plots and chloroforming schemes for half a century, and deserves to be celebrating. They appear to be releasing some new DVDs, and this was the one offered for review. It’s pretty special.

I graduated from the ‘parents who turn the TV to Sesame Street each morning’ club about 30 years ago, but still remember it well, although I have lost track of all but the basic Muppet character names. I assume that my kids still recall the songs. Unless you come from a household that doesn’t hold with show’s liberal philosophy, you probably harbor specific memories as well. I believe that around 1981 or so, my wife drove to toy stores all over Los Angeles in search of a discontinued set of Fisher-Price wooden character toys. She found them too — they must be in the attic somewhere now.

Older Sesame Street videos were high-quality musical stories using the characters; I remember renting a movie about Big Bird taking a trip, interacting with Second City actors, etc…. Follow That Bird.  Their records were excellent as well. I guess I have a pristine set in the attic too — I only played them once to put them on audio cassette for my daughter.

Many compilations of old TV series have a problem — people that buy entire seasons of, say The Red Skelton Show soon find out how repetitive they are. The alternative is to produce something like those ‘nostalgia’ roundup shows found on Public Television during pledge drives. One tunes in to revisit a show, only to find it cut up into bits and sandwiched between new material. New hosts are added to make the show ‘accessible’ to current audiences. The kiss of death is when a series that would logically appeal to an older demographic, is hosted by young celebrities who then proceed with explanations… of something they were born too late to witness themselves.

Sesame Street Fifty Years and Counting avoids that pitfall entirely. With a minimum of explanation, the first disc in the two-disc set simply hits us with unedited segments of musical numbers from the show’s archives. There’s a mix of new and old. Some songs are presented by the Sesame Street cast, and many involve special celebrity guests. Quite a few are fairly new, but the show digs way back to the beginning to reference basic songs and animation, some likely reformatted from old 2″ helical scan videotape. Songs about numbers and letters of the alphabet proliferate, naturally. Interspersed are a few choice Muppet-celebrity interactions that aren’t fully musical. The talent on view is terrific and the productions are marvelous. An older comic scene between a Muppet and Madeline Kahn is fondly remembered, and the musical numbers from newer decades are impressive indeed — Broadway quality.

As I said, the extracts are uncut and un-modified. When Bert & Ernie cook up a song in bed or in the bathtub, the entire sketch is present, not an excerpt. For reference use, this makes the show much more valuable. Some of the earliest material is the best — and we haven’t seen the ‘number’ pieces for decades. Watching the animated pinball machines with the old audio is … special. ‘The Ladybug’s Picnic’ (a counting song) is awfully special when you can remember clapping along with it, with a toddler on your lap.

Disc One is predominately music. Disc two strings together a great many serial plotline ‘stories’ that played out on the show. I believe part two begins with Big Bird stories — the one about running a marathon, plus the entire saga of the ‘imaginary’ Mr. Snuffleupagus, from when the neighbors thought Big Bird might be nuts, until the creature finally makes himself known to the rest of Sesame Street. There’s also the wedding of Luis and Mar’a, and the episode that acknowledged the passing of Mr. Hooper.

Although each disc has several chapters, the show content is not really indexed. Disc one is a full three hours in length, and things pop up at random, with only a few animated chapter breaks. Nowhere is there a list of what is where; all I know is that the ‘Ladybug’s Picnic’ shows up at 35 or 45 minutes, I forget which. Worse for someone of my age, I recognize most of the celebrity singers’ voices but don’t necessarily know their names, and some aren’t identified.

So if you really care you may have to make your own index. We’re told that outtakes are included as well, even with Jim Henson showing up at least once.

Shout! Factory’s DVD of Sesame Street Fifty Years and Counting is a bright and colorful and beautifully mixed compendium of show highlights, without external comment or explanation. That’s a terrific formula for viewers that want to re-experience highlights: each musical number and dramatic/comic scene that comes up is a rediscovery.

The chapter titles provided weren’t all that helpful. But we’re happy to report that the show segments haven’t been reformatted. The lower-resolution material from the 1970s and ’80s is retained at the old TV aspect ratio. Many of the music excerpts look right at a sharp 1:78, so I have to assume that they are mostly from 2001 and forward. The disc bears a CBS Home Video logo, in addition to the Sesame Street and Shout! Factory branding.

Subtitles are present in English and Spanish. Besides a general description on the back, the disc has no text explanations for its holdings. The only extra menu choice leads to promos for other Sesame Street Workshop discs: Magical Wand Chase, Dance Party, Awesome Alphabet Collection, and Celebrate Family. The first disc is the only one that appears to be original programming. The others are self-explanatory. The Celebrate Family promo shows only new-ish material. It may not be a historical archive as is this 50 Years disc.

I’d really like to see two restored excerpts not on this collection. One is a number-counting animation Five Bears in the Bed,’ the one that goes …”they all rolled over and one fell out…”. I still think that one is hilarious. The other is a ‘celebrate family’ piece from fairly early on, filmed on 16mm, I think. To a really moving song called ‘My Brother,’ a young Latino boy sings about his older brother, who works as a mechanic or in an auto body shop. The song really got me. Another great song about brothers, We are Brothers (Somos Hermanos), is what everybody says I’m remembering. Somebody show me that I didn’t imagine the one where the younger brother sings about his working older brother.

At 17 years old I saw my first glimpse of Sesame Street through a screen door while delivering for a pharmacy — one of those pinball animations, I think, and a bit of a sketch that was obviously put together by educators … very smart educators. I thought, this must be the future.