Ya like quality pro-intervention propaganda?  Warners’ filmic call to arms inspired America’s reluctant warriors via a superhuman feat by a highly decorated WW1 veteran… and promptly got into hot water with the United States congress. Howard Hawks’ highly effective load of sentiment and sanctimony makes Tennesseans look like denizens of Dogpatch, U.S.A.. But America loved it, even favorite Gary Cooper’s cute ‘aw shucks’ mannerisms that compare shooting the enemy with shooting a turkey. That’s how we baby boomers learned about patriotism. 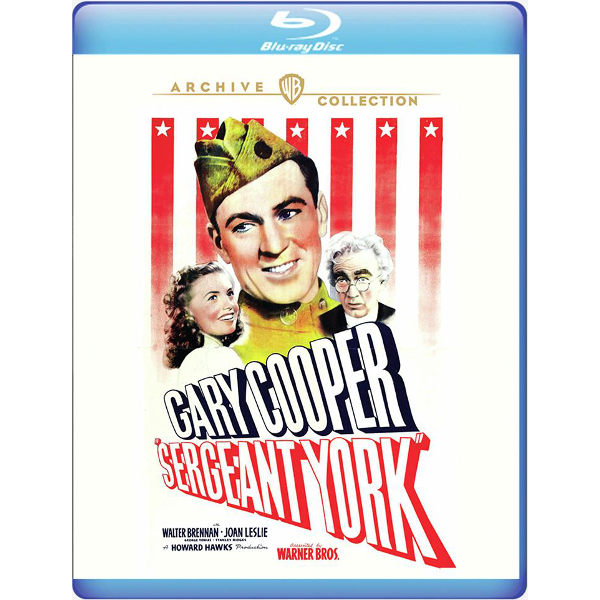 Sergeant York, ‘Or, How I Learned to Reconcile my Backwoods Pacifism with Total War,’ definitely makes the short list of movies that had a profound political effect on the American public. As a persuasive call to arms it has no equal. A large section of America in 1941 believed that our involvement in World War One had been a mistake, and business interests wanted to keep doing business with the European aggressor. Even after Hitler had conquered most of Europe, pro-Nazi legislators and influential pro-German organizations were still holding firm, to the extent of accusing Hollywood of being a nest of Jews and Bolsheviks making anti-Isolationist propaganda.

Howard Hawks’ advocacy movie is an outgrowth of the ’30s Warners tradition of taking hard liberal attitudes on social problems. It’s an unusually complicated example of filmmaking, restating recent history to make a statement about pressing contemporary (1940) problems. It’s beautifully filmed, emotionally stirring and exactly right for 1941. The mission: make contact with a United States that was still largely rural and agricultural, a heartland that suspected that Washington policies might not align with ‘true, God-fearin’ Americanism.’

Tennessee hill subsistence farmer Alvin C. York (Gary Cooper) is a hell-raiser until he meets the love of his life Gracie Williams (Joan Leslie). Alvin straightens out and works for the money to buy the rich farmland that will make him a suitable husband. His shootin’ contest winnings put him over the top, but when the seller reneges on the deal Alvin seeks revenge. Stopped by a bolt of lightning, he finds religion and humility under the guidance of his pastor (& general store owner) Rosier Pile (Walter Brennan). Then the war comes. The Army rejects York’s application as a conscientious objector. A thoughful commanding officer (Stanley Ridges) helps Alvin resolve his personal pacifist conflict. In combat ‘Over there’ in France, he confronts his moral dilemma — the necessity of killing for one’s country.

Alvin York’s Mother (Margaret Wycherly) sums up the stubborn, insular rural American attitude in a prayer: “And help us not to be beholden to anybody.” That’s all the Yorks ask for even though Mother is overjoyed when her boy knuckles down to work toward buying a better piece of land. Alvin York — and Gary Cooper — were heaven-sent to motivate a complacent America to once again fight in Europe. A Christian, York overcame his pacifist beliefs, saved his command in a daring and bloody single-handed exploit, and became the most decorated hero of the day. York’s story had everything: Pacifism versus combat service, Godly rural values against the political mire of war. Even better, the real York was smear-proof. He had remained a fervent pacifist, and not a glory-seeker. 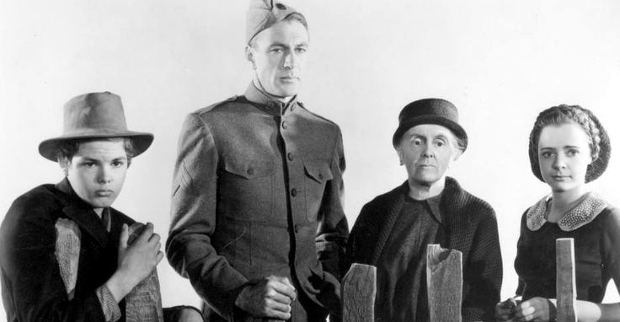 John Huston helped write the movie version of York’s story and would later work with the most decorated soldier of WW2, Audie Murphy. He described Murphy (admiringly?) as a ‘natural killer.’ A poor Texan, Murphy capitalized on his medals and became a movie star, while the equally impoverished York refused to profit from his war record on principle. York’s pacifism was real. Only in the late 1930s did he advocate that America enter the war.

Film critic Joseph McBride’s research tells us that when Frank Capra and John Huston began making official war effort films in 1942, what they saw made them fear that the war had already been irrecoverably lost. Just a few seasons earlier, Sergeant York pulled out all the stops to get Americans behind its message. It shamelessly reconstructs Capra’s populist ‘Mr. Deeds’ formula of the anointed innocent. A backwoods superman, Alvin York instinctively knows what’s right, even if he must commune with his Bible to work out the details. He remains noble and pure while opposing the ‘evils’ of the outside world.

Instead of asking America to understand the reality of what’s happening, the movie sticks to past events and keeps its arguments simplistic and emotional. Some of the details are a little slippery, especially when it comes to representations of the Army. The drill Sergeants are swell guys at heart. The soft-spoken officers behave like devout church counselors, engaging with York’s pacifist doubts. They win him over with kindness and a book of American History. When the lead officer (Stanley Ridges) tries to explain to Alvin the necessity of fighting, we’re reminded of George C. Scott’s contrasting blood ‘n’ guts speech in Patton.

Bringing God into the equation is fair play because the sentiments presented are Alvin York’s own. The screenwriters cleverly restrict the conflict to a simple choice between God and Country. A few Bible quotes provide the wisdom — “Render unto Caesar that which is Caesar’s, and render unto God that which is God’s” — and dicey pious imagery does the rest. York’s conversion to the Good Book is presented as an outright miracle in the form of a bolt of lightning. When Alvin’s patient and understanding commanding officer learns that he’s a conscientious objector, he actually gives him the choice of opting out of combat ( ! …. !! …….. !!!!!!! ). Alvin takes his old dog to the top of a mountain to meditate on the problem, a visual that suggests the soul-searching of the Apostles, or even Christ’s wandering in the wasteland. Every undecided, impressionable American kid surely felt ennobled by Alvin/Gary’s example, and the movie remains a potent nostalgia item.

Warners’ publicity insured that audiences were primed to anticipate the moment when Alvin drops the Golly-Gee reticence and starts shooting enemy soldiers… by the bushel. The impression of combat is completely opposite the one given by the openly pacifist All Quiet on the Western Front: perceiving a one-in-a-million opportunity, the Tennessee soldier pulls victory from defeat with a perfectly executed one-man battlefield move. Alvin York put his skill to work in decisive action, but was he also very lucky?  Had he been shot dead when he took off on his own, might it have been presumed that he was running to save his skin?  History instead gave us a fabled warrior.

So you killed men to save lives?

Why be hesitant about a movie that surely motivated thousands of needed enlistments?  Surely one of the better-crafted films of its year, Sergeant York played differently when shown on television in 1969, delivering the message that we ought to be equally motivated to do military duty in Vietnam. It was the wrong movie for this potential draftee to see — kids formed by the anti-consumerist lessons Mad magazine recognized the movie’s highly effective sales job. Alvin York survives and prevails because he’s basically Superman with a hick accent, and his ‘rube’ mannerisms are really a bulletproof shield. Despite the bloody killing, the film makes combat seem ennobling, and even fun. The example most often stated is York’s amusing ‘gobble gobble’ trick, which works like a charm when York turns a German trench into a shooting gallery. Some boys going off to Johnson/Nixon’s war were sorely disillusioned when their experience did not live up to the glorious movie version.

In other words, a war movie with ‘timeless messages’ is bound to go in and out of favor depending on how one feels about a particular conflict. And there always seems to be a war going on to compare it to.

Director Hawks makes sure that all the players in Sergeant York make a maximum impact. Oscar-winner Gary Cooper is in top form and judges his performance well. When Alvin is at home in Tennessee, Howard Hawks directs Cooper to use his entire range of cute gestures… Joan Leslie basically falls in love with an adorable puppy. In the battle lines in France, ‘softie’ Alvin becomes the sober action hero of Cooper’s Beau Geste. He shoots a bunch of enemy soldiers “’cause my fellers was a gettin’ killed.” George Patton was right: after all the Bible talk is said and done, direct combat makes one’s individual conscience irrelevant.

Walter Brennan carries a big part of the story involving York’s draft dilemma, and sings the Gospel without over-selling it. George Tobias and Joe Sawyer make important impressions in the army scenes. Margaret Wycherly (White Heat) lends credibility to the entire hill-country setting. And lovely sixteen year-old Joan Leslie ( ↓ ) provides the life and promise that makes York’s struggle and victory something to care about — every returning war vet is going to be honored and treated well!  Ms. Leslie’s exuberance makes the emotional experience seem personal. It became an important touchstone for an entire generation going off to war. Alvin York got his farm — if you enlist, heaven forbid that you should buy the farm.

The Warner Archive Collection Blu-ray of Sergeant York is a cleaned-up and spit-shined digital restoration of this 79-year-old major hit. It’s immaculate, like Alvin’s manners. The WAC has offered reviewers a restoration comparison we can post, HERE. Frankly, I don’t think the previous DVD looked that ratty… The movie is half constructed on interior studio sets and half staged in the open air, a mix of the artificial and realistic. The cinematography is so good that the distinction blurs. The killing ridge set may or may not be a studio interior. Howard Hawks is definitely on his game in this show. He strays from his personal style, interrupting his stand-offish wide masters to shoot scores of to-die-for close-ups, especially of Joan Leslie.

The extras come straight from the old DVD set, from 2006. Jeanine Basinger’s commentary is a good listen. She places the film in context regarding its makers, actors and the real Alvin C. York. For a stirring finish she brings in an appearance by the late Joan Leslie, with some WW2 veterans.

The two good short subjects are in Standard Definition. Lions for Sale is an excellent color piece about training real lion cubs to perform in circuses and movies — I wonder if animal advocates will approve or disapprove. Tex ‘Fred’ Avery’s B&W Porky’s Preview shows the pig personally drawing his own animated cartoon … all squiggles and stick figures. After seeing that one as a kid, I tried to draw my own flip-book cartoon. The in-house making-of documentary Sergeant York: Of God and Country insists that the movie offers a timeless philosophy, as opposed to a serving a specific propaganda function. But it does present a valuable account of the anti-Semitic Dies committee in action, attempting to curb Hollywood’s pro-interventionist filmmaking. The docu confused me on one point. They say the studio initially withdrew Sergeant York after only a month of release, because congressional pressure threatened the film industry’s right to free speech. If the film only came back in 1942, how did it become one of the top-grossing pictures of 1941?