3-D in CinemaScope? That seems like a strange combination, but this obscure treasure hunt adventure with Joanne Dru and Mark Stevens is indeed billed as being filmed in the ‘Miracle of Stereo-Vision,’ five years after the demise of Hollywood’s first fling with ‘depthies.’ Kino and the 3-D Film Archives extras include two vintage 3-D shorts, one of them never screened in 3-D. 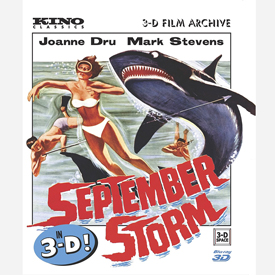 The 3-D Film Archive has been an amazing resource for the fascinating depth format, locating and restoring over thirty 3-D features and directly or indirectly making many of them available to home video’s excellent 3-D Blu-ray systems. Their latest offering is the culmination of decades of research and a couple of years’ worth of hard work, aided by a successful Kickstarter campaign.

The 1960 release September Storm is a latecomer in the original ’50s 3-D craze, straggling in five years after the last studio 3-D, Revenge of the Creature, which played mostly flat. Former film exchange manager Edward L. Alperson had a fling with mogul-dom in the mid-1930s, running a short-lived studio called Grand National. He continued as an independent. Although best known for the classic 1953 version of Invaders from Mars, Alperson had a hand in producing scores of ’50s features, and finished his career by bankrolling Billy Wilder’s Irma la Douce, a huge moneymaker. September Storm is a lark of a picture shot on a shoestring in an exotic location — with the 3-D rig used on the original Bwana Devil, the film that started the craze. 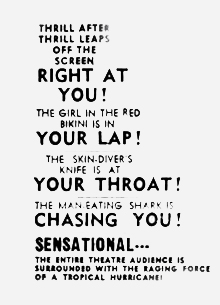 September Storm takes viewers on a Mediterranean yachting adventure. Story scribe Steve Fisher was an ace writer of film noirs, and screenwriter W.R. Burnett remains one of the more famous authors who wrote for the movies. Although the hyped posters make September Storm look action packed, the story is a leisurely hunt for sunken treasure, with only occasional moments of conflict and jeopardy. On the glorious island of Majorca, the wealthy playboy LeClerc (Jean-Pierre Kérien) decides to return to Paris to woo the lovely Yvette (Véra Valmont). He leaves his handsome yacht Cigne in the hands of his handyman, local Manuel del Rio Montoya (Asher Dann). Manuel immediately pretends that he’s the owner, to carefully romance Anne Traymore (Joanne Dru), a New York model on vacation. Enterprising drifters Joe Balfour and Ernie Williams (Mark Stevens & Robert Strauss) need a large boat to recover three $ million in Spanish doubloons recently lost while being smuggled into Spain. Blackmailing Manuel over his misrepresentations to Anne, the crafty Joe is soon captaining an illicit, high- spirited treasure hunt. Various minor problems and one large storm complicate the voyage, but the beautiful Anne is the focus of more interesting disputes. The eager Manuel is frustrated when she gravitates toward the cynical but respectful Joe. The heavy-drinking Ernie becomes a bigger problem as they near the treasure — and gets the notion that Anne ought to be his property.

Even if its promised thrills aren’t all that exciting — the ferocious shark on the poster is a pale prop — September Storm has the 3-D scenery and the beautiful Joanne Dru to keep up our interest. The standard travelogue-plus-adventure setup sees the caper being hatched over dancing and drinks at a nightclub, where the floor show is a Flamenco performance by Charito León and Ernesto Lapeña. Alperson may have hired the restaurant cheap, but the dancer Lapeña was a name talent, who helped Antonio Gades in Carlos Saura’s great dance film Carmen (1983).

The actors give it their best. Joanne Dru looks terrific and understands how to make her thinly written role not seem silly. Her Anne Traymore maintains enough dignity so that we still respect her after two out of three of her male companions try to get too friendly. At least that part of the drama holds up. Mark Stevens brief starring career was long gone by 1960. He spends much of the movie without a shirt, and looks so thin and wiry that we wonder if he’s not well. His is the most interesting role. Joe Balfour is written as a total crook, but Stevens makes him likeable enough that we want him to get away with the illicit treasure. 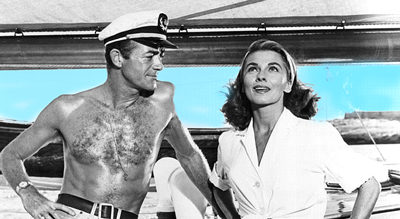 Seasoned performer Robert Strauss knows he’s along to provide clowning at pre-set intervals. He’s so lovable that Ernie’s transformation into a greedy rapist seems a little extreme. Strauss makes a good villain, but the two personalities seen here don’t mix. Unknown quantity Asher Dann looks the part of a Majorcan sailor, crossed with a Hollywood pretty boy. His Manuel steals a boat, hoping some of his boss’s luck with the women will rub off. As for the boss LeClerc, the reason actor jean-Pierre Kérien looks familiar is that we’ve seen him in Carol Reed’s Trapeze, as the ‘other’ aerialist who takes over for Burt Lancaster.

September Storm is low wattage drama mainly because a story doesn’t really develop. The mostly minor incidents en route to the treasure — oh no! Joe’s been stung by a Portuguese Man ‘o War! — do not alter the relationships. Only at the end, when Ernie and Manuel show their true colors, does anything really happen. But even after Anne withstands a mauling or two, everybody can still work together almost as if nothing happened.

The 3-D is very attractive, thanks to the impressive locations and the visual dynamics aboard the sailboat. The underwater scenes are not a first for 3-D as claimed by Alperson’s ads, but they are the first in color. As the 3-D rig does limit the number of angles, veteran director Byron Haskin can be commended for finding camera positions and blocking that display the action, carry the story and don’t leave the actors hanging around with nothing to do. This involves cutting some corners, as when a scene or two reveal the boat to be motionless when it is supposed to be cruising. Even Steven Spielberg encountered terrible troubles filming at sea. The experienced Byron Haskin must have taken pains to avoid complex shots that would cause him major continuity trouble.

The only drawback to the 3-D is that producer Alperson, apparently wanting to tout another ‘special’ quality for September Storm, had the flat-widescreen 3-D material adapted to the CinemaScope format for projection. A horizontal stripe was taken out of the original negative, as with the Superscope process. Most of the picture looks okay, but more than half of the shots in the flamenco sequence crop the dancers’ feet off!

In his biography-interview book, director Byron Haskin has virtually nothing to say about the film. He doesn’t even mention the fact that it was in 3-D. His only anecdote about the filming is that the original title was supposed to be The Girl in the Red Bikini. That idea went away when Joanne Dru refused to wear a bikini because she had stretch marks. The posters for the film show a diver in a bikini anyway.

By 1960 3-D was primed and ready for a novelty re-visit. Bosley Crowther’s New York Times review reads as if producer Alperson had committed a cultural crime:

“Some people never get the message. As long as seven years ago, it was pretty convincingly demonstrated that this business of having to wear special eye-glasses in order to get the effect of so-called three-dimensional films not only was an annoying inconvenience but also was full of technical flaws. The novelty interest in it very soon wore off.”

That doesn’t leave much wiggle room for us ordinary moviegoers to counter with the simple assertion, ‘We like 3-D. It’s cool.’ My generation would have to experience 3-D mostly through View-Master toys.

The oddest thing I noticed about September Storm are its main titles, which are done in exactly the same style as those for Invaders from Mars, right down to the color and layout. Designer Boris Leven was the art director on both movies — could he have fashioned them? These titles look so good in 3-D, it almost makes sense to think that Invaders had been planned to be 3-D as well. However, entry #10 at this page assures us otherwise. 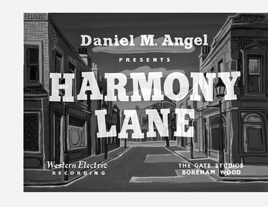 The Kino Classics 3-D Blu-ray of the 3-D Film Archives’ September Storm 3-D is one of those novelty pictures that 3-D system owners will want, just to enjoy seeing how yet another independent film approached the process. The Archive’s meticulous restoration includes a lot of color correction and image realignment work, to recreate the effect of the original 3-D presentation. The disc’s contents are viewable in flat 2-D as well.

Adding to our interest are some appropriate extras. The Adventures of Sam Space aka Space Attack is a color 3-D stop-motion short subject screened with September Storm in its initial engagements. Harmony Lane is a B&W 3-D short subject thought lost, a two-reel collection of British music-hall performances. Dancers, singers, and comics are seen through store windows by a (dancing) Bobby walking his beat at midnight. Some of the entertainers are pretty dire, but there is a brief little visit from the charming Dora Bryan, and the 3-D is excellent.

The ‘3-D Space’ company gives us a couple of additional interviews. Interviewed recently, actor Asher Dann happily tells us how he was plucked out of nowhere to romance Joanne Dru in a film to be shot in Majorca. A smaller interview reveals a secret about Harmony Lane. Famed director Lewis Gilbert (Alfie, You Only Live Twice) confesses that he was the director on the odd short subject; Daniel M. Angel produced it along with some of Gilbert’s early features, including Cosh Boy and The Sea Shall Not Have Them. Gilbert expresses relief that he chose to take billing under the name Byron Gill, because the show was only released in 2-D, and when seen flat, audiences booed it off the screen. This release is Harmony Lane’s official 3-D debut, 64 years after it was filmed.