We’re on the road again with a pair of eccentric new-age hobos, the kind that just can’t hack it in polite society. Gene Hackman and Al Pacino’s conflicting acting styles get a workout in Jerry Schatzberg’s tale of drifters cursed with iffy goals; Vilmos Zsigmond’s Panavision cinematography helped it earn a big prize at Cannes. 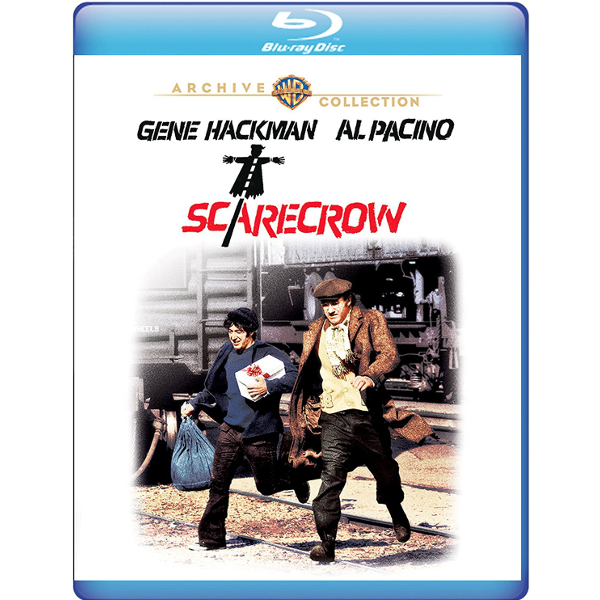 Movie-wise, everything was up in the air in the early 1970s. The view from Westwood in West Los Angeles, then the place to go see a film, painted a picture of a few huge hits (Love Story, The Godfather, The Exorcist) and a lot of films that couldn’t find an audience. So many bombs, like the expensive Catch-22 were balanced by Carnal Knowledge and some of the Robert Altman pictures. Some pundits say that Spielberg and Lucas ‘rescued’ movie screens from these half-baked ‘auteur’ movies, imitations of artsy European fare or expeditions to find something new in the cultural Black Hole dug by Easy Rider.

From about 1968 on, most of the old-guard directors were no longer in demand, and hot new directors seemed to be chosen for their hip-ness quotient. Having a counterculture attitude worked wonders, especially with an impressive record in some other field. Jerry Schatzberg, a former fashion photographer, made a pretentious but respectable high-fashion ersatz Euro picture called Puzzle of a Downfall Child, but then moved on to the terrific Panic in Needle Park, one of the few drug-&-misery epics that made the grade. It probably wasn’t a big hit, but its artistic integrity guaranteed that Schatzberg would attract quality collaborators.

Schatzberg’s next picture Scarecrow stars his Panic headliner Al Pacino, teamed with another big name, Gene Hackman. It landed in April ’73 and took up residence at Westwood’s Bruin Theater for several weeks; I don’t know if it had already won big at Cannes but it was considered a success. By contrast Robert Altman’s hipster Philip Marlowe revision The Long Goodbye came out a couple of months earlier and dropped like a stone. I don’t remember where it played (certainly not Westwood) but I didn’t even find out that it existed for several months, when I think there was a halfhearted attempt at a reissue.

From what I saw Scarecrow appealed to a young and rich Hollywood crowd 1973 movie crowd that showed up to ‘the right’ movies, and brought their marijuana with them. We film students had seen this show all before — it’s a road picture / tragedy on the lines of La strada, but with plenty of artsy landscapes. The eccentrics who meet on the road are existential vagabonds, see, whose stories connect with everyone, man, it’s the human condition. Packed into the Bruin the night I saw Scarecrow were a pack of longhairs in designer clothes, that looked like a Sunday Supplement for ‘the new hippie look’. Perhaps they were all music and film industry players? A year before I had worked a summer on a parking lot in Westwood. I’m in basic film student uniform: a frayed work shirt and long hair that is definitely not designed. I remember one couple pulling in in a Jaguar XKE, lime green — he was in slick leather from head to toe, dark glasses and a big scarf. She was wearing something but was all legs and her top practically didn’t have a front. It was the power couple of the year that could have been an inspiration for Shampoo.

In other words, the ‘New Hollywood’ was not a collection of salt-of-the-earth types, although a few bona fide film students (with good jungle instincts) did break in. It’s like the great artistic Neorealist directors in Italy — who came mostly from the trendier sections of Rome and had solid contacts in the industry. One was even nobility, a Count.

Scarecrow is an actors’ picture, a loosely structured tale that leaves plenty of room for performance improvisation. A great deal of shooting was done in the early morning to try and catch interesting skies and moody overcasts that camera whiz Vilmos Zsigmond can exploit in long-duration widescreen. Zsigmond put his career the hard way; he’d been getting higher profile assignments for several seasons but was still not that far removed from toiling on pix for Al Adamson. Altman’s masterful McCabe and Mrs. Miller put him on the high road. The images here are less mannered than in some later Zgismond pictures — he’s fond of long lenses but manages realistic lighting schemes, whether for the inside of a bar or a cheap shack of a rented home.

Scarecrow goes for the poetic feel of Of Mice and Men, as two strangers on the road form a friendship. The blustery Max (Gene Hackman) has a short fuse, and waxes enthusiastic about a car wash he wants to open in Philadelphia. Lion (Al Pacino) is a clownish little guy who makes faces and acts out jokes, a strategy that he says makes people like him. He’s on his way back to Detroit. More information on them is parceled out a bit at at time. Max is just out of San Quentin for a six-year hitch for assault. Lion has spent five years as a sailor; he’s going back to see the wife he abandoned and the child he’s never seen.

The film is high quality ‘make it up as we go along’ material, aided by Pacino’s kooky performance. Hackman isn’t totally a straight man, in that his Max demands loyalty. The way Pacino’s Lion clings to Max for emotional strength, we almost thing there’s a homosexual angle. But that’s dispelled in one episode after they’re jailed for brawling. The uncooperative Max is made to work in a pig farm, and a crooked trusty (Richard Lynch) reads Lion wrong and gives him privileges with the idea of having a sex partner. Lion is brutally beaten, Max retaliates and their bond becomes stronger. The two guys are interesting but not really likable. We never fully believe that Max’s story about the car wash is anything but hot air. Max is always out to pick up women. He turns a bar heckler (Eileen Brennan) into a one-night bedmate, while Lion watches. The most developed episode sees them shacking up with Coley and Frenchy (Dorothy Tristan & Ann Wedgeworth), both of whom would like a more permanent arrangement. Max’s macho attitude toward women isn’t very flattering. Lion has insecurities about reuniting with his wife, but his playing games instead of relating to people plays as a definite sign of inner disturbance — he relates best to small children.

The show wants to be a free-form American odyssey, but it follows a familiar pattern from meaningful short stories and Kerouac- style road movie diaries. Lion’s joke about a scarecrow seems a weak plea for his ‘make ’em laugh’ personality, and the gift for his child he carries comes off as sentimental shorthand — it could have been a Teddy Bear. By the final act we can see that Lion has serious emotional issues, perhaps made worse by the beating in jail. And a disastrous phone call to the woman he abandoned five years before (Penelope Allen) pushes him over the edge. It’s the high point of the movie, yet the actors actors work in isolation. Lighter scenes include Max’s impromptu striptease in a bar, imitating Lion’s leave-em-laughing philosophy. It will either seem a great actor moment, or a case of an actor trying to generate something out of nothing, in a picture with little forward momentum. The audience I saw it with thought it the height of hilarity.

Writer Garry Michael White may or may not have written the final scene, which simply gives Gene Hackman another acting moment coming up with some hidden cash to buy a bus ticket. The ‘huh?’ factor in the abrupt ending is clearly meant to be different than the ‘big drama’ finish of something like Midnight Cowboy, another tale of mismatched vagabonds. It isn’t very satisfying, but the hipster audience I saw the picture with in 1973 thought it was high art.

Scarecrow is quality goods . . . it’s just very predictable. Counterculture freedom spawned more cliché gimmicks as had square Hollywood fare. I think this is why the big, brassy and wholly conventional The Sting was the most popular picture of 1973 — people were starved for ordinary entertainment.

I looked up Penelope Allen and saw her plum role with Pacino in Dog Day Afternoon. And if the IMDB is correct the lovely, talented Ann Wedgeworth passed away just last week.

The Warner Archive Collection Blu-ray of Scarecrow is a fine encoding of this show, which was a ‘notable’ release of its year and then mostly disappeared from view until the DVD years arrived. It did not do well pan-scanned for TV, but HD brings out the best in Vilmos Zsigmond’s cinematography. Even though he hasn’t yet gone filter crazy, his delicate images don’t duplicate well. Because the drawn-out main titles are on long shots of scenery, our heroes’ meet-on-the-open-road introduction is all slightly grainy and soft (if you really look for these things). But otherwise the journey from Northern California to Detroit is one long series of Panavision shots — few of them on sunny days. Thank providence that they use interesting blues tunes along the way (are they by Fred Myrow?) to avoid folk-rock banalities about ‘being lost in America.’

The show comes with a publicity featurette with some okay behind the scenes footage. Without a clue as to why the movie is interesting, it simply tells us what great talents Hackman and Pacino are. The trailer does a good job of making the film seem important, if not essential.

For all I know Scarecrow is be the favorite picture of millions — to me it represents a mostly unrewarding exercise in acting styles.