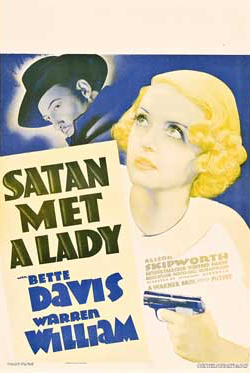 This 1936 production is the second film to have been based on Dashiell Hammett’s 1930 The Maltese Falcon and although the names have been changed, the crimes remain the same… though this time the object of interest is not a jewel-encrusted falcon but a ram’s head filled with gems. Warner Bros. assigned Bette Davis to this right after The Petrified Forest and the feisty actress was so appalled by the script she walked off the set. John Huston and company did it right (really right) five years later and the rest is movie history.