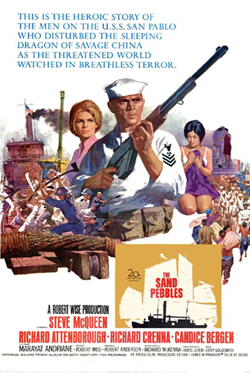 Roadshow epics were going the way of the dinosaur by the time Robert Wise’s The Sand Pebbles appeared in 1966, particularly in the wake of the small films (like that year’s Alfie and Georgy Girl) that were speaking to younger ticket-buyers in a way the stodgy blockbusters were not. More’s the pity because Wise’s film, about a machinist’s mate caught up in the Chinese civil war of 1926, is an ambitious attempt to examine both political and personal conflicts against an intriguing historical backdrop. Steve McQueen stars as the rebellious sailor alongside Richard Attenborough whose romance with a Chinese courtesan comes to a tragic end.