These fugitives on the run aren’t innocent young lovers. Still wanted for anti-war violence from years before, an ex-radical couple struggles to remain free just as their children become old enough to think for themselves. Screenwriter Naomi Foner and director Sidney Lumet’s fascinating movie is a sympathetic look at an untenable lifestyle. 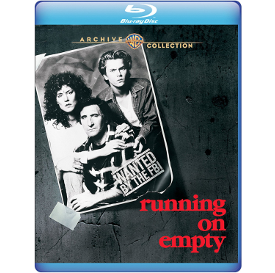 1988 suddenly seems much farther in the past than it did just a few months ago. The small town high school in Running on Empty has a dedicated, classically trained music teacher on the payroll. He earns enough to afford a nice house. The public school system is not being undermined, with all the wealthy students going to new kinds of exclusive alternative schools that siphon off public money. We all have our own ideas about what ‘making America great again’ means, I suppose.

It doesn’t happen any more, but we used to read about ex- radicals from the Vietnam War days surfacing to turn themselves in. Not that many were directly involved in violent acts, but some had lived for decades under assumed identities while their wanted photos were posted down at the Post Office. Some of them tried to raise families.

“We are all outlaws in the eyes of America.
Everything they say we are, we are.
. . . And we are very proud of ourselves.”
— The Jefferson Airplane

Naomi Foner’s Running on Empty is basically a ‘what comes next?’ chapter in the lives of former political public enemies like The Weather Underground. An unusual family is on the lam. The parents are militant radicals from the Nixon years, who went underground when one of their bombs maimed a janitor. Now they are nearing their forties and must move from town to town whenever they think the Feds have picked up their trail. The couple chose their life and accepted the consequences. But where does that leave their growing children, who are likewise forced to live like gypsies under assumed names?

I should think that this good movie would have a tough time in today’s market. If the online mob harps on Wonder Woman for promoting non-traditional values, what would they make of a movie ‘glorifying terrorism?’  Half of America still wants to see Jane Fonda strung up by her thumbs, and death threats for ‘enemies’ singled out on the web are now routine. Our channels of information are so jammed with stories elbowing each other for attention, I don’t think anybody could rouse the general public to even consider the problems of this kind of fugitive. Who has time for scurrilous pleas for sympathy for ‘undeserving’ people, when the public responds better to patriotic pieces about veterans . . . or cute animals?

Always watching for signs of F.B.I. surveillance, young Danny Pope (River Phoenix) alerts the rest of his family through pre-arranged signals. Annie and Arthur Pope (Christine Lahti & Judd Hirsch) abandon their jobs, their belongings and even their dog and flee to a new state with Danny and their other son Harry (Jonas Abry). They start new lives with new identity. Arthur and Annie find off-the-books employment as a cook and a medical receptionist and the boys enroll in school with ‘previous transcripts on the way.’ We see the unusual preparations that must be made, the secret arrangements so any family member can alert the others if they’re found out. We also see that the family is supported to some degree by a network of post-radical (or still radical?) sympathizers, such as a doctor (David Marguiles) who tends to political fugitives.

But the Popes are cut off from their own families. Annie’s disapproving father (Steven Hill) can see her only in an extraordinary circumstance arranged by a third party. Potential trouble comes when former comrade Gus Winant (L.M. Kit Carson) drops by. He’d like to sleep with his old flame Annie and is carrying guns in the assumption that Arthur will agree to rob a bank with him. But a more troubling problem is closer to home. Young Danny has inherited his mother’s musical talent and his teacher Mr. Phillips (Ed Crowley) is encouraging him to apply to Julliard in New York. Danny is also stuck on Phillips’ teenage daughter Lorna (Martha Plimpton), a girl to whom he might be ready to commit. As far as Arthur is concerned, Danny can’t do any of those things because his first duty is to help his family maintain the undercover life. Annie doesn’t know what to do. If she leaves her son behind, she may never see him again. Practically speaking, Running on Empty will only play well to a certain segment of the public. Are you the kind that sympathizes with draft deserters that fled to Canada, or the kind that wants to hand them long terms in prison? The Popes aren’t victims of injustice, at least not directly. They knew what they were doing when they went militant, and the injuries they caused can’t be dismissed as youthful idealism. They are also hopelessly associated with fanatics they inspired, like the SLA. And there’s no statute of limitations on armed insurrection. I think almost all of the radical fugitives that went underground are now accounted for. Some served prison time and others got off because courtroom prosecutions would reveal or publicize the government’s own illegal doings.  Running on Empty dramatizes what might have been reality for just a few of these ‘outlaws in the eyes of America.’ Some radicals reportedly found it easy to live undetected while still on various Most Wanted lists. Others found ways to turn themselves in, square themselves with the authorities and re-commence academic lives interrupted years before when they opposed the government. *

Running on Empty is a fascinating show, with a cast that clearly had to work hard to make their characters believable. Christine Lahti puts up with her bossy, security-minded husband. He himself gets drunk one night and starts shouting his real name loud enough to wake the neighbors. Judd Hirsch and director Lumet know that these can’t be ordinary people. He doesn’t try to make them Ozzie and Harriet types, somehow (sniff!) trapped by their youthful mistakes. No, they still promote various Union and social justice causes here and there, although Arthur must back away whenever he becomes visible enough to appear in a news photo. Every year they celebrate a birthday to Sam, the man struck by their bomb. It’s not a joke, but a ritual so they won’t forget their crime.

At the center of the movie is the cult actor River Phoenix, who graduated briefly to good roles after his appearance as an adolescent space voyager in the fantasy film Explorers. Phoenix is excellent as Danny, a kid raised to never let down his guard. The show begins with Danny detecting a plainclothes tail and executing what must be ‘escape plan 9.’ The family is out of town in a matter of minutes. Danny’s a sensitive, smart guy. To play by the rules he must keep himself a complete mystery to his new girlfriend Lorna. The boy is committed to his family but feels the pull to go off on his own, where a decent future awaits. It’s not a situation wholly unique to these former radicals. This must happen whenever someone breaks away from a strongly structured family, or a religious cult.

The movie’s tension level doubles when Danny takes the forbidden step of telling Lorna everything. How many of us living normal lives (well, reasonably normal lives) could trust our sweethearts with such a volatile secret: “I and my whole family are fugitives from justice. Anybody helping us is a potential accomplice. Just by letting you know, I’m putting you in legal jeopardy. Will you turn me in, or become a criminal with me?”

At this age Martha Plimpton might remind one of a teenage Lauren Bacall. A survivor of Goonies, she is featured in what I think is the best Cannon film, Shy People. Plimpton and Phoenix have several worthy melodramatic romantic scenes to play, and they’re excellent together.

With the ace director Sidney Lumet in charge the strange relationships seem credible, even when the flaky and reckless Gus Winant breezes through. The former radical patriot is now nothing but an outlaw bum. In a nice choice, Gus is played by L.M. Kit Carson, the original fake counterculture hero in the classic experimental faux-documentary David Holzman’s Diary. With dangerous idiots like Gus on the loose, the Popes can’t even consider themselves part of a noble creed. Some of their old colleagues are indeed armed and dangerous.

I don’t think the Popes would stand a chance of evading the cops in today’s security state. One can no longer simply find the name of a dead infant and apply for a new birth certificate and passport. The Popes aren’t hiding in a shack in the woods but are out and about in the public, working and rubbing elbows with schools and doctors. I guess that back in the 1980s Arthur could become a cook and Annie a receptionist without references, but it’s less likely now, when one can’t buy bubble gum without leaving a data trail. Traffic and security surveillance cameras are now everywhere. Billions of smart-phone photos are taken at public gatherings, and routinely posted on the web. A high-level security agency could be (is?) scanning the web with face recognition software.

Sidney Lumet wrote that his movies Running on Empty and Daniel shared the same theme: “Who pays for the passion and commitment of the parents?”  This is an even-handed and insightful drama. Lumet made a wide range of great entertainments, among them some of the best- ever ‘New York Jewish Liberal Movies.’ He’s also one of the few directors who could take on fundamentally controversial material like this, and continue to maintain a busy career.

The Warner Archive Collection Blu-ray of Running on Empty is a good encoding of what was already a very good WAC MOD disc from just two years ago. The improved picture and sound reveal the expected quality of a top Sidney Lumet product. The attractive small town we see is a political landscape completely different from the rapacious corporate banking wasteland of last year’s Hell or High Water.  ‘Radicals unselfishly trying to stop a war in 1971’  is still anathema, while Mr. and Mrs. U.S.A. now considers it justifiable for ‘radicals to selfishly try to rescue their ruined finances.’

Madonna is on the soundtrack for a scene in Daniel’s music class. The final James Taylor song Fire and Rain works extremely well in context: “. . . and I always thought that I’d see you again.”

* I remember a major case from 2001. A radical who had evaded capture for thirty years finalized arrangements to turn herself in, after a delicate negotiation aimed at running her quietly through the legal system to let her get on with her life. She was reportedly not personally responsible for any violent acts, and under her assumed identity had worked for decades in a socially productive job. I followed her story for a couple of days in the newspaper . . . and then 9/11 happened. In the storm of security-minded post-attack chaos that followed, her story thread vanished from the media-scape. I don’t have a clue what happened to her next. The timing couldn’t possibly have been worse for a former Enemy of the State.