Akira Kurosawa wrote the original story for this slam-bang action picture that finally got Cannon Films on a, ‘Hey this is a great movie’ list or two. Mean, nasty, desperate men make an impossible escape attempt across a frozen landscape that might as well be on the moon. Jon Voight gets to use the same eccentric gimmicks that Dustin Hoffman exploited, and comes off great while Andrei Konchalovsky showed Cannon what a brilliant director could do. The show also established Eric Roberts and Rebecca De Mornay as talents to watch. 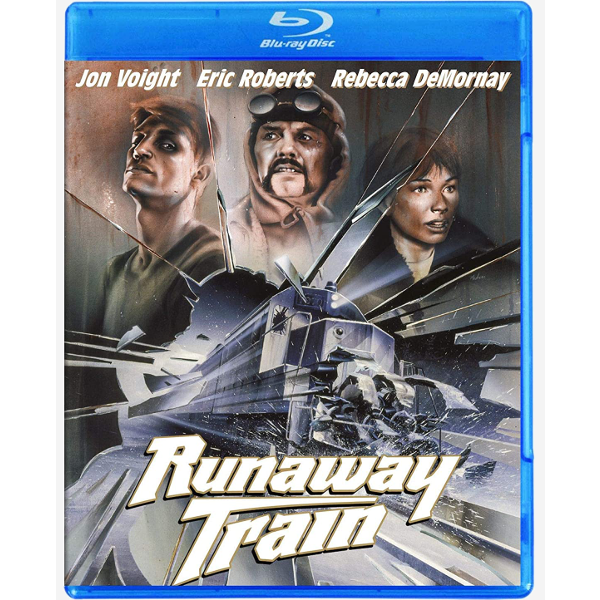 When I first started working for The Cannon Group on La Cienega in early 1987, I saw the posters on the walls for awful- looking pictures and asked, what’s the best film they’ve made?  Everybody answered, ‘Runaway Train.’ That was a Cannon movie?’ I liked it on the ‘Z’ Channel but forgot that it was from Golan and Globus.

Everybody in the Cannon trailer department joked about the quality of the pictures, but Andrei Konchalovsky’s Runaway Train was respected by all. I also remember seeing news coverage of the production here locally in Los Angeles, showing that a film company had taken over the crumbling Pan Pacific Auditorium, to film large-scale special effects using enormous train mock-ups.

Runaway Train could boast a high-toned pedigree — its source was a screenplay written by the highly respected Akira Kurosawa. Even Star Wars fans knew who Kurosawa was: George Lucas had appropriated parts of the director’s The Hidden Fortress as the basis of his space fantasy.

The grabber for Runaway Train was a tone of relentless action and single-mindedness of purpose. It isn’t just that the film has no narrative fat. It wastes no time setting its extreme characters in motion, engaged in a fever-pitch conflict. At least two-thirds of its running time is spent on a snow-covered freight train barrelling through the Alaskan wilderness, out of control.

The movie has the simplicity of a graphic novel — everything is exaggerated, yet believable. It takes place in Alaska, in the Stonehaven Maximum Security Prison. The place is in a constant state of near-riot. Prisoners and guards alike have been driven mad by the psychotic Warden Ranken (John P. Ryan), who is notorious for bragging on TV shows about how he treats the ‘animals’ in his care. The equally legendary criminal Oscar ‘Manny’ Mannheim (Jon Voight) rebels against Ranken’s authority. He hasn’t left his isolation cell in three years — Ranken had the door welded shut. A court order springs Manny from that confinement, but Ranken retaliates by paying a prisoner to murder him. When that doesn’t work Manny determines to use an escape route through the sewer. His brother and fellow convict Jonah (co-screenwriter Edward Bunker) can’t come along, so Manny allows a punk, boxer Buck McGeehy (Eric Roberts) to join him in an escape into the terrible winter snow. They hide themselves in a string of fast freight engines that’s just pulling out… unaware that its engineer has had a heart attack. Joined by railroad employee Sara, who was sleeping on the job (Rebecca De Mornay), Manny and Buck are trapped on a speeding train, unable to reach the lead locomotive containing the shutdown controls.

Co-writer Paul Zindel also wrote the fine play The Effect of Gamma Rays on Man-In-the-Moon Marigolds. Another, Edward Bunker was a former convict who contributed to the excellent Straight Time, the story of a parolee starring Dustin Hoffman. The soundtrack crackles with good dialogue, even in the more cartoonish scenes in the prison. When Ranken sends a hit man to kill Manny during a boxing bout the entire prison population is aware that he’s doing so.

When a movie’s characters do little more than scream at each other for two hours the effect is usually mind-numbing. That happens here too, but it’s bearable because every outburst gets us closer to understanding the psychology of the characters. Jon Voight’s Manny is your standard Rebelus Extremus, a Spartacus with bad teeth, scars around his eyes and the stigmata of a fresh impalement through his left hand. Instead of incapacitating him, Manny’s wound makes him just a little less tough than he might be.

The character dynamic is tense from the outset. Buck is an insecure motormouth. He desperately wants approval from Manny, who he idolizes for all the wrong reasons. Manny freaks out several times during the wild train ride ordeal, lapsing into uncontrollable rage. A simple access door that won’t open makes him thrash around like a mad bull. 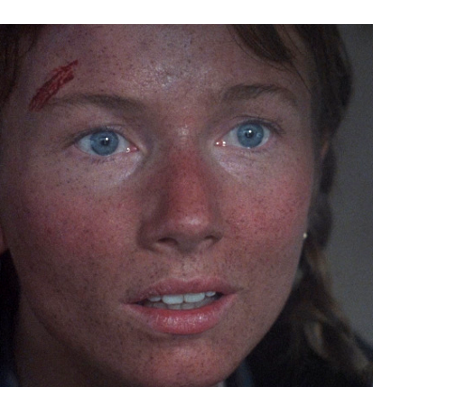 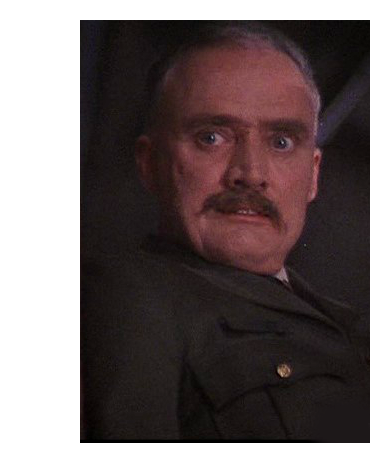 Commercial movies in 1985 needed ‘a girl.’ Director Konchalovsky has the services of the talented Rebecca De Mornay, who makes a strong impression despite the fact that Sara serves to dispense exposition and to ‘ask tough questions’ of the deranged Manny. Rooting the action in some kind of reality is the chaos back in the railroad control headquarters, scenes that are a little reminiscent of The Taking of Pelham One Two Three. Kyle T. Heffner is proud of his computerized MS-DOS train system. Kenneth McMillan is a welcome presence during all the yelling and arguing. Do they derail the train or let it continue and hope for the best?

The great John P. Ryan (The Missouri Breaks, The Right Stuff) plays the maniacal Ranken as if also about to lose total control. For him Manny might as well be The Great White Whale. The film gets away with the unlikely gag of having a helicopter pace the train at 80-90 mph, so that men can try to transfer to it via a rope ladder. Is there extra pay for that?

Ugly, explicit dialogue makes Stonehaven seem a real hellhole. The movie has the tone of a Paul Verhoeven picture without Verhoeven’s off-putting excesses. What amazed viewers in 1985 was the apparent realism — CG Imagery hadn’t yet compromised the notion of ‘suspension of disbelief.’ We get so many great angles of our actors on the moving train that we really believe they’re out there in the elements, hanging onto the speeding, frozen juggernaut. Sticking one’s head out a window at 80 mph isn’t recommended, and doing it in the frozen air would hit one’s face like sandpaper.

The camera crew and effects experts on Runaway Train pull off illusions so good that they’d never be noticed come Oscar time, although the film was nominated for Henry Richardson’s editing. Process photography with train mockups in that big auditorium saves the day — the angles are so fresh, it doesn’t even look like process photography. The camera isn’t locked down, and in fact, jostles all over the place, imitating the difficulty a cameraman would experience filming on a speeding locomotive. I hope I haven’t a faulty memory, but I believe the behind-the-scenes featurette showed some shots filmed with rolling backdrops, mechanical painted canvasses of trees (a side angle) or the railway bed (down angle). Blurred with the camera shutter and equalized in the film grading, that silent-movie trick works well with close-ups, especially when characters are hanging between the cars.

Any time you see anybody working around a real train, be very aware of the everyday hazards and the potential price of a simple miscalculation. There’s plenty of frightening stunt work in Runaway Train, filmed way out in the snow in Alaska and Montana. The show never cheats on its visuals. Chalk that up to the Russian director, eager for a technical challenge. The realistic veneer is everything — the movie wouldn’t work at all if we didn’t believe what we were seeing.

The third act gives Manny several philosophical ‘author’s message’ speeches, but they work fairly well. We like the idea that somebody is giving some thought to what all this mayhem might mean, even if it’s a sticky gum-wad about man’s eternal struggle for freedom. Manny is a mad dog in search of an apocalypse yet also a tortured soul. He tells Buck that the most beautiful thing in the world would be a menial job that offered peace and anonymity. When Sara speaks the word ‘animal’ again, Manny gets all up in her face, ready to kill — and then says simply that he’s something worse than an animal: ‘human.’ It’s very much like the plea of the Manimals in the classic Island of Lost Souls: “Are we not men?”  Awards voters were duly impressed, as Voight was nominated for Best Actor by the Academy and won the same with the Golden Globes. We also admire an ending that allows Runaway Train to dodge exploitation fireworks and opt for an art film vibe. I don’t recall anybody feeling cheated by the ending.

Runaway Train became a moderate hit, which for Cannon Films was the equivalent of a worldwide blockbuster. I like it mostly because it allowed Andrei Konchalovsky to proceed to my favorite of his films, Shy People. It’s an expensive Louisiana-shot drama of no particular genre, which never would have been made otherwise. Cannon ground out hundreds of awful movies, but also a few gems.

The KL Studio Classics Blu-ray of Runaway Train is a new encoding, although I didn’t see major differences between it and an early BD disc release. Those Northern forests still look both lush and brutal at the same time, and the special effects with people clinging to the train are as exciting as ever. I pause to think every time — ‘How did they do that?’

On a commentary track recorded several years ago for Twilight Time, David Del Valle and C. Courtney Joyner talk with actor Eric Roberts, who remembers the film well and happily shares stories of its making. Roberts likes to talk about Jon Voight and particularly the way the tall and skinny Voight was ‘beefed up’ to look like a bruiser. I would like to have heard more about the filming of all those practical effects — I think I skipped over an American Cinematographer article once without reading it. When Del Valle asks Roberts about the effects, there’s not much the actor can say except, ‘that’s movie magic!’