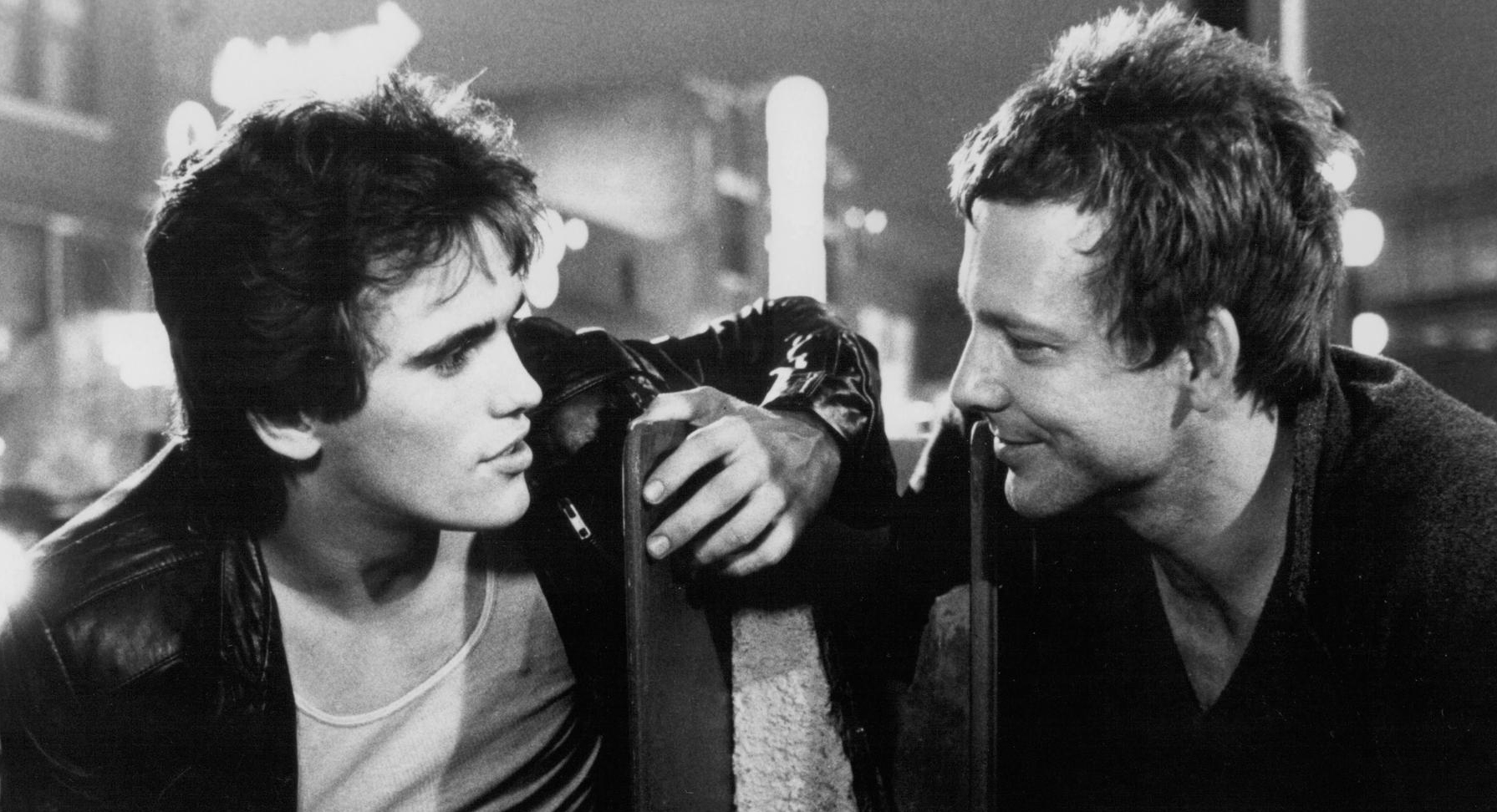 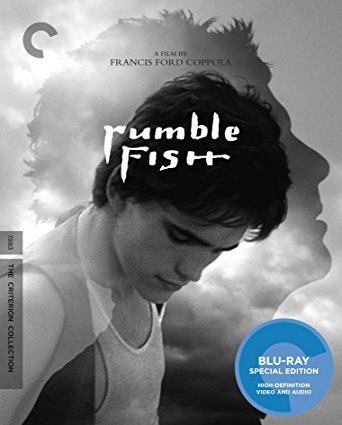 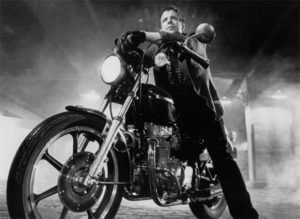 Rumble Fish, Francis Ford Coppola’s Young Adult tone poem, unspools in a black and white never-never land of sullen teens, pool tables and pompadours. It may take a moment for the audience to suss out that we’re not in the Eisenhower era with Chuck Berry, Marilyn Monroe and the Cold War but squarely in Reagan’s domain of MTV, Madonna and the Cold War.

Set in a destitute Oklahoma town with the ghost of The Last Picture Show whistling through its empty streets, Matt Dillon plays Rusty, an inveterate gang-banger growing up in the shadow of his older brother played by Mickey Rourke, a reformed juvenile delinquent who returns to town on his omniscient motorcycle, a symbol not of anything more than previous motorcycle movies (presumably The Wild One, in keeping with the Brando allusions that blanket the film like an over-decorated Christmas tree).

Rusty occasionally entertains a long-suffering girlfriend played by the incandescent Diane Lane (in the film’s best performance) and slums with a sparse band of brother hoods including Nicolas Cage, Sean Penn and Vincent Spano. Rusty’s aimlessness and volatile temper lead to an inevitably bloody show-down that leads to the inevitable existential awakening. 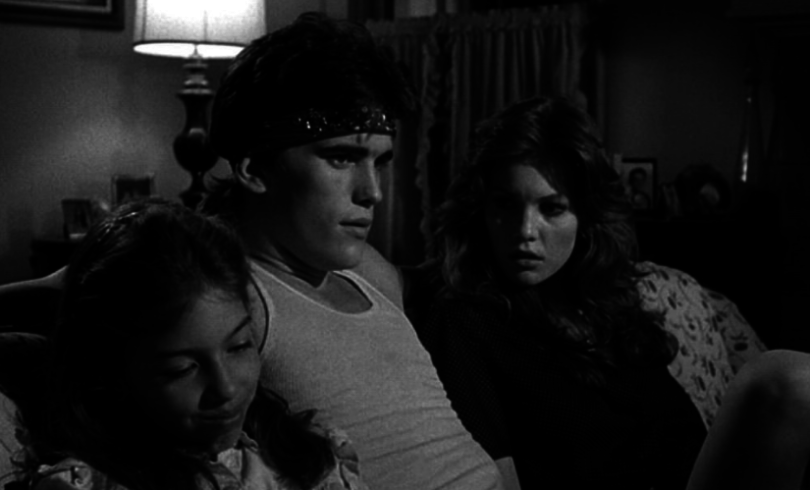 Rumble Fish was the third film Coppola produced and directed under the aegis of his own company, Zoetrope Studios. Beginning with Apocalypse Now, the then 40 year old director, one of the great storytellers in Hollywood history, began to rely on a more visual form of communication, depending on the admittedly stunning photography of Vittorio Storaro to stoke his fires.

Even with novelist S. E. Hinton on the set to flesh out the characters, Rumble Fish remains, courtesy of cinematographer Stephen H. Burum, a succession of glamorous, incendiary portraits of youth in flux, Coppola’s own Postcards From the Edge. Posing his actors like the statue of David against expansive skies and billowing clouds, Rumble Fish finds Coppola in the business of myth-making, though his characters don’t seem ready for Tulsa let alone Mount Olympus.

Criterion has gone beyond the call of duty with their new blu ray release of Coppola’s 1983 film including a superbly rich presentation of Burum’s velvety cinematography as well as a generous round of new interviews with cast and crew including Matt Dillon, Diane Lane and archival footage of Mickey Rourke puttering around his Hollywood home, channeling fond memories of ‘Boogie’ Sheftell and the Rourke that was. 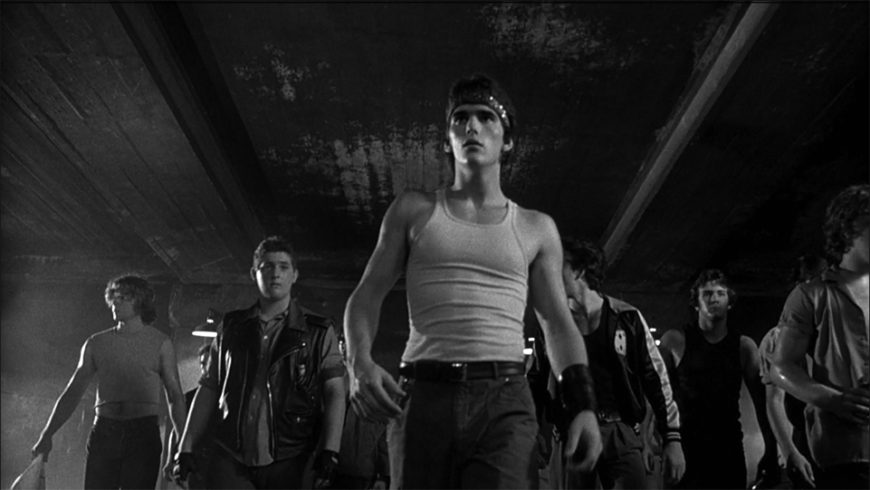 A short list of some of the other supplements in this treasure trove include:

A film-long audio commentary with Coppola
On Location in Tulsa, a short appreciation with new and vintage interviews
Interviews from 1983 with Dillon, Lane, Spano and producer Doug Claybourne
A long form documentary, Locations: Looking for Rusty James by Alberto Fuguet
A print essay from Glenn Kenny 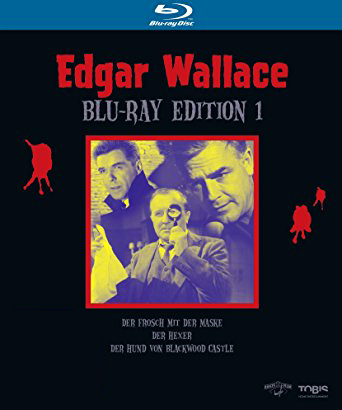 The crime novels of Edgar Wallace were enormously popular in the writer’s native England but his home country’s initial film adaptations, including 1939’s The Dark Eyes of London and 1940’s The Door of the Seven Locks, were not only few and far between, but indifferently produced and wanly directed. Such terrible food. And such small portions.

It was therefore fortuitous when, in the late 50’s, Wallace’s son Bryan arranged for a series of his father’s idiosyncratic thrillers to be filmed in Germany, a country that proved, with Fritz Lang and Robert Wiene forging the trail, that low kitsch could be converted into high art. Although most certainly not in the same league as Lang’s Metropolis or Wiene’s The Cabinet of Dr. Caligari, these light-hearted entertainments, manufactured with the no-nonsense methods of Lang and company, expanded the wide-ranging influence of German expressionism in popular culture.

Known as “krimis” (German for “thriller”), the series got off to an assured start with The Face of the Frog directed by Harald Reinl and starring the actor who would embody the playful spirit of these films, Joachim Fuchsberger. Throughout his fourteen appearances in the Wallace adaptations, this prematurely grey-haired sophisticate’s bemused reaction to each outlandish plot and extravagant super-villain never waned, die Cary Grant von Soho. 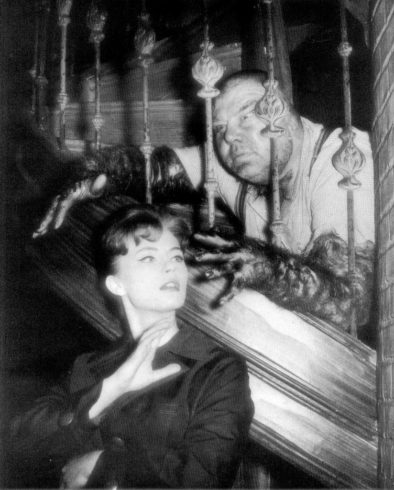 The series hit its stride with what is probably the most memorable episode in its long run, the 1961 remake of 1939’s Dead Eyes of London. It’s no coincidence that this was the film to set the series’ standard, it was directed by Alfred Vohrer, a former actor who helmed his first film, 1958’s Imperfect Angel, at the age of 44. Vohrer seized upon the outré elements of Wallace’s work and pushed them to their breaking point.

In Vohrer’s krimis, the devil-may-care director has it both ways: the horrific moments are resolved with a comic exclamation and the humorous scenes play out with an ominous undertone. His staging, a comic book version of Lang’s bold stylistic approach, was constantly surprising; it wasn’t unusual for him to stage a scene from inside an actor’s mouth with the camera peering out over giganticised teeth and gums.

Such peculiar shenanigans needed the proper mood music and composers Peter Thomas and Martin Böttcher concocted the kind of unhinged pop usually associated with novelty records, the sound of seedy strip-club jazz heard from a distant asylum. Thomas and Böttcher took on the lion’s share of the krimis and their distinctive, not to mention loony, approach to their work defined the off-center appeal of the films.

There would be 32 of these Wallace adaptions, all of them produced by Rialto Films and each directed by either Vohrer or Reinl. Elegantly produced, knowingly acted and tongue almost always firmly in cheek, there are few better rainy-day distractions than these. Appropriate because it’s almost always raining in Edgar Wallace World.

Universum Film in Germany have released a fine blu ray set of three of the most popular krimis in the Edgar Wallace Collection – Edition 1. 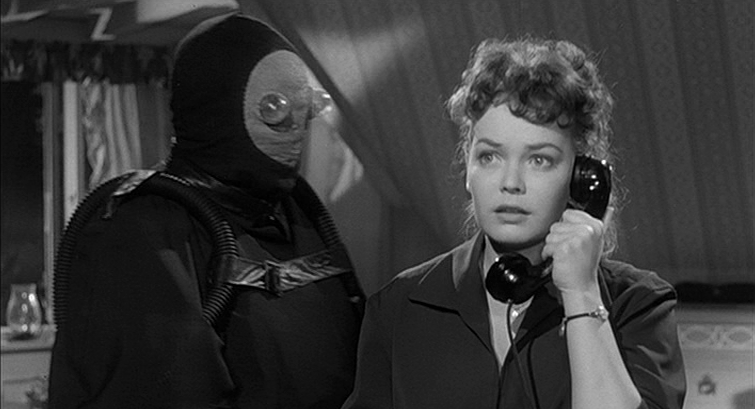 Harald Reinl is in the director’s chair for The Face of the Frog, the first of the Rialto productions. A revolving cast of villains, detectives and other red herrings would surface in all of the krimis and several of them, including Fuchsberger, made their first appearances here including the eternally sinister Fritz Rasp (the “thin man” of Metropolis), Eddi Arent, our official comic relief, and the doughy, mild-mannered chief of detectives, Siegfried Lowitz.

Fuchsberger (playing an amateur sleuth from America named Gordon) is on the trail of the Frog gang, a roving band of crooks with amphibian tattoos who specialize in unconventional robberies. They’re led by a hulking hooded character called The Frog whose disguise is a simple black mask save for two bulbous plastic eyes. The Frog has his google eyes trained on the beautiful daughter of the inspector but so does our intrepid hero Gordon. Along with the help of his unpredictably athletic butler (Arent), the greenhorn gumshoe is determined to make sure the right man wins her hand.

The second film in the set, The Mysterious Magician, appeared eighteen films and five years later and starred both Fuchsberger and Heinz Drache. Drache, who shared Fuchsberger’s nonchalant demeanor in the face of outlandish adversity, would alternate starring roles with Fuchsberger throughout the series. 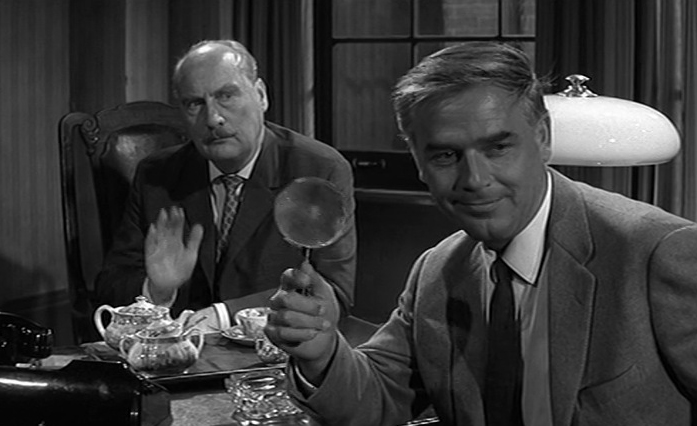 In Magician, AKA Der Hexer, Fuchsberger is now Inspector Higgins, on the trail of The Magician, a soft-hearted criminal with a benevolent nature whose only prey is scoundrels and low-lifes. In exile for lo these many years, the possibly psychic criminal haunts London once again in search of the men who murdered his sister. Lowitz and Arent are back along with the diabolically unctuous Jochen Brockmann (a veteran of Lang’s The Indian Tomb and Journey to the Lost City).

The third film in the package is also one of the few krimis produced in color, The Hound of Blackwood Castle. The owner of a luxurious but nonetheless ominous mansion has died and his wayward daughter arrives on the scene to settle his estate. Soon Blackwood Castle is stacked to the rafters with the reddest of red herrings, riper than ever in Eastmancolor. Drache goes solo in this lively outing featuring killer snakes and bloodthirsty canines while the lovely Karin Baal (Fassbinder’s Berlin Alexanderplatz) plays the endangered lassie ripe for rescue. 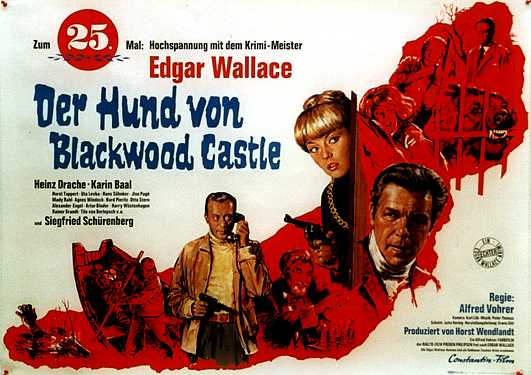 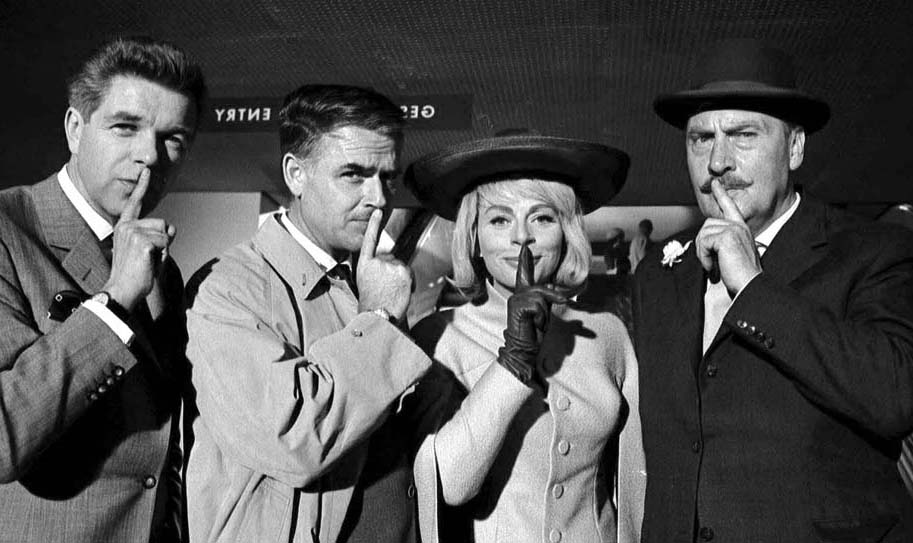 Universum’s all region release boasts transfers that range from beautiful (Frog) to lovely (Hound). In between is The Mysterious Magician whose generally pleasing picture is occasionally interrupted by blighted frames (though that effect lasts for only a few minutes). Fans of these films will be very pleased.

The movies come with a complete range of audio options including the original German tracks with English subtitles and good old-fashioned dubbing which adds an extra Saturday Matinee sparkle. A smattering of extras, including trailers and alternate title sequences fill out the bill.