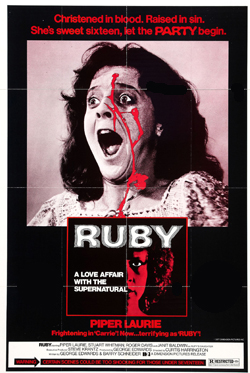 Piper Laurie, still flush with her success in 1976’s Carrie, is mother to another supernatural trouble-child in this 1977 possession potboiler from director Curtis Harrington (Night Tide). Laurie plays the titular Ruby whose deaf-mute daughter begins to show signs that her personality has been taken over by the spirit of her dead father, a sleaze-ball mobster executed by his own associates. Perennial tough-guy Stuart Whitman plays Laurie’s current lover and Janit Baldwin, who left acting in 1984, plays the levitating teen.