A significant horror hit from ’77, Ruby surprised all that made it including its director Curtis Harrington, who struggled with an interfering producer for control of the set. Despite everything, star Piper Laurie still shines, and there’s some good atmosphere — for an Exorcist rip-off, it’s not bad. 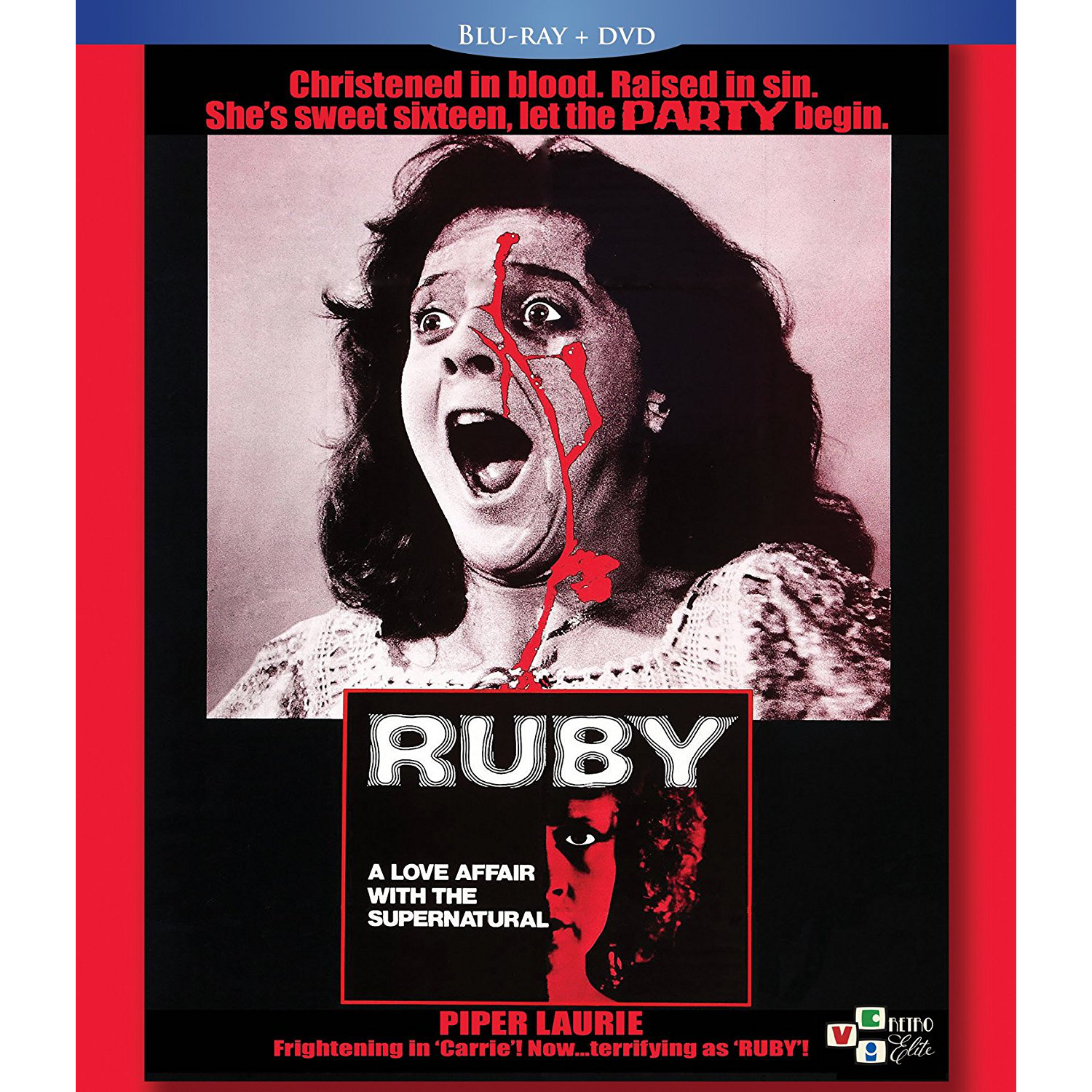 Curtis Harrington had as rough a directing career as anyone, but not without an artistic triumph or two. Fascinated by fantasy and horror, he was filming avant-garde short subjects while still a teenager. He also wrote what might be the first critical look at screen horror as a genre (‘Ghoulies and Ghosties’, Sight and Sound, 1952). A moody mermaid-terror picture and a trippy space vampire show earned Harrington his ticket to ride. After the highly regarded Games for Universal he specialized in TV movie horror and theatrical scare pictures with stars like Shelley Winters, Anthony Perkins, Debbie Reynolds and Ann Sothern. But we’re told that Harrington’s biggest box office performer was Ruby, a 1976 horror effort from the independent outfit Dimension Films, initiated in an effort to imitate the gigantic hit picture The Exorcist. Hardly anybody calls Ruby a particularly good movie, but everybody agrees that it raked in the cash during the 1977 ‘summer of Star Wars.’ In Los Angeles one couldn’t miss the TV ads. It had Stuart Whitman, Piper Laurie fresh from the horror hit Carrie and a photo of a screaming, blood-streaked young woman on the poster. It cleaned up.

As is thoroughly covered in the disc extras, Ruby was an unhappy experience for Harrington, who was thwarted every step of the way by producer interference. The original story was by producer Steve Krantz, who seems to have hated Harrington’s style of directing. Working with next to no money and following a rushed shooting schedule, Curtis Harrington was barely able to get a reasonable feature in the can. The result is a mishmosh of disconnected scenes, and highly variable acting. Yet the central conflict is strong enough to hold the show together.

When it came time to make a lucrative TV sale, Krantz took the opportunity to re-cut the show, doing much more than removing material offensive to the Standards and Practices people. Harrington took his name off the TV version, which was assigned the ‘Allan Smithee’ directing credit. Ruby existed for more than twenty years in this mangled Krantz version, before it was restored (most of the way) to its theatrical cut.

Once again we have a horror saga pinned to a back-story in the past, except that the ‘present’ is in the past as well. In 1935, gangster kingpin Jake Miller (Fred Kohler) rubbed out the handsome hood Nicky (Sal Vecchio) when he caught him with Ruby Claire (Piper Laurie), Jake’s moll and partner in crime. Ruby was pregnant with Nicky’s child. Sixteen years later Ruby runs a drive-in movie theater that employs members of the old gang. Jake is a sightless invalid in a wheelchair. Nicky’s daughter Leslie Claire (Janit Baldwin) is a mute with mild mental issues. Ruby wants her committed to an asylum. Assisting Ruby is her faithful helper and occasional lover Vince Kemper (Stuart Whitman), who indulges her reveries about her brief film and recording careers (“One lousy record!”). Sensing that something is not right with Leslie — weird things are happening — Vince calls in an old buddy, psychic researcher Doc Keller (Roger Davis). Doc may already be too late, as the vindictive spirit of Nicky has chosen this time to begin killing the gang members that did him wrong two decades before. How? By demonic possession!

Ruby is literally all over the place, a grab bag exploitation movie with some class elements, mainly a game performance by Ms. Laurie and Harrington’s attempts at cultured horror. It turned out well considering the low budget and reported producer second-guessing. It turned out extremely well when one considers that it held the independent box office record for two years, until the arrival of John Carpenter’s Halloween. But it’s still a mess of undigested elements and frequent terrible acting.

Harrington keeps Ruby in motion, even if producer Krantz was elbowing his way onto the set and countermanding the director’s instructions. The drive-in movie setting practically made the show an interactive experience. Various patrons neck in their cars, which is what much of the film’s real audience was likely doing. But the time spent with various randy customers is not really related to the main story. Neither are the various ex-mobsters being killed by apparent demonic powers particularly connected to the drama in the Claire household. Ruby watches the drive-in from afar with a small telescope, sending Vince running when she sees things go wrong. With her big eyes and pallid face, Leslie creeps around like a ghost, sometimes barging into scenes with old Jake in a wheelchair.

As Ruby, Piper Laurie tries to whip up interest the old-fashioned way, chewing scenery and singing her old songs while drinking. One ordinary evenings or even when alone, she wears fancy dresses and waves a red feather boa. To that extent she’s a cousin of Harrington’s other horror pictures linked to female stars, a combination of Blanche Dubois and Norma Desmond. Ms. Laurie had only recently returned from a filmic career break lasting fourteen years, making Ruby even more indebted to the tales of Baby Jane Hudson and Charlottte Hollis.

Ruby suffers nightmares in which her old beau Nicky, his face perforated with bullet holes, returns from the dead to haunt her. Ruby frequently screams at people, and resists the efforts of the ‘doctor’ to get to the psychic roots of Leslie’s special condition. Although Laurie does her best, some of the performance is misjudged, simply over the top. Ruby never quite pulls its dramatic story together. We can almost picture producer Krantz looming over the set, telling Harrington to skip the elegant touches and get on with the Guignol. He shouldn’t have worried with this tacky storyline stuffed with exploitable elements. We have plenty of suspects for what could either be a supernatural tale, or a bizarre murder scheme based on gangster motives, jealousy, or insanity.

Ruby is worth seeing because Harrington is a definite film artist, fighting the good fight in an uphill battle. He tries his best to create a spooky atmosphere, in a film that seems to take place only at night. All the ersatz Exorcist trappings are fairly good. Janit Baldwin is a bit low-wattage but has her act down pat, as a crazed Wednesday Addams on crack. Leslie doesn’t blurt out any obscenities, but when she speaks with Nicky’s rough voice the effect is fairly creepy. The physical effects are okay, with wind-blown curtains, mirrors breaking and furniture being tossed this way and that. The show also works up a pretty good whirlwind and spark-storm effect in various locales. When spirits invade the drive-in, the pole-mounted car speakers dance around for a moment, a nice touch.

At one point the possessed Leslie arches her back in a spider-walk pose, an effect not used in The Exorcist. Since I didn’t see Ruby new, I’m not sure if the scene was always there — some iffy notes suggest that those shots was added later.

The dramatic scenes are hit & miss, with relationships left fuzzy and entire subplots (especially the psychic Doc business) left up in the air. The various bloody murders are also a bit odd, as no police ever show up, no matter who dies. Vince simply disposes of the corpses Norman Bates-style, one after another. The movie also lacks a sense of spatial organization. The drive-in and the nearby house never seem connected, even though they are supposed to be right next door to each other.

Harrington’s most successful material takes place out by a pond dressed with plenty of hanging moss for eerie night scenes. That makes the strange love-from-beyond-the-grave finale work rather well, even though it’s marred by what multiple sources say were Steve Krantz re-shoots done with director Stephanie Rothman.

The least convincing material can be chalked up to production penny-pinching. The movie trots out some vintage cars but otherwise can’t muster much of a period feel, either for 1935 or 1951. We just don’t feel we’re anywhere but on a movie set. Although Harrington’s angles are good the cinematography is weak, with dull lighting and frequent out-of-focus shots. Although that bayou setup is okay, the house interior and the drive-in just don’t look like much.

But as icing on the cake, the spirited editing makes good use of clips from Attack of the 50 Foot Woman, the film being shown in the drive-in. We don’t care if that particular feature is seven years too early, as it is pleasing to imagine a drive-in theater that show that movie in seeming perpetuity. As a final added flourish, the jazzy soundtrack by Don Ellis (The French Connection) lends the picture a needed kick of romantic delirium . . . something to motivate the crazy events in Ruby’s love life.

Not a really good movie, Ruby is nonetheless highly watchable. Curtis Harrington must have been surprised when it did so well — it had all the right elements for the summer of ’77. VCI’s Blu-ray + DVD of Ruby is a new 2K film transfer and restoration that can’t disguise the weak cinematography — the show never achieves a really good look. But the HD scan does well with what’s there, and the slightly soft picture looks clean. Piper Laurie comes off well.

The label’s new Elite Edition adds to the wealth of video and audio goodies available on this title. We’re given David Del Valle’s video interviews with director Harrington from both the late 1980s and 2001. The levelheaded Harrington doesn’t promote himself as a film artist, which is genuinely refreshing. He’s fair and candid about this production, which caused him a lot of professional aggravation. Del Valle goes deeper into the film’s details in a new commentary with the academician and journalist Nathaniel Bell, who also provides informative, concise liner notes (printed on the back of the disc cover).

Casual fans may want to start with a second commentary that unites the late director Harrington with his star Piper Laurie. She has a fine time reacting to the film. It’s nice to hear her admitting to herself that she’s okay in most scenes – she knows it’s not her finest hour. The track never degenerates into mutual admiration fluff, as do so many talent commentaries. Director and actress are quite honest about their work, and if anything are too critical of their contributions. And they can’t dislike the picture too much — it became an overachieving moneymaker, and that’s never something to sniff at.

Check out David DeCoteau on Ruby.