Cary Grant and co-star/missus Betsy Drake do honor to the ‘family picture’ genre — with a filmic boost to child foster programs that offers a positive message, avoids most clichés and generates some sly fun too. What we see resembles real life, even if Cary Grant should never be shown washing dishes. Betsy Drake’s take-charge mother sets family policy as she opts to take in first one and then two foster children. It’s also the film debut of little George Winslow, before he picked up the ‘Foghorn’ nickname. Plus there’s a cute dog and some kittens that offer a sex education lesson.  The recent biography of Cary Grant should renew interest in this entertaining and socially admirable show. It’s warm & fuzzy yet not at all saccharine. 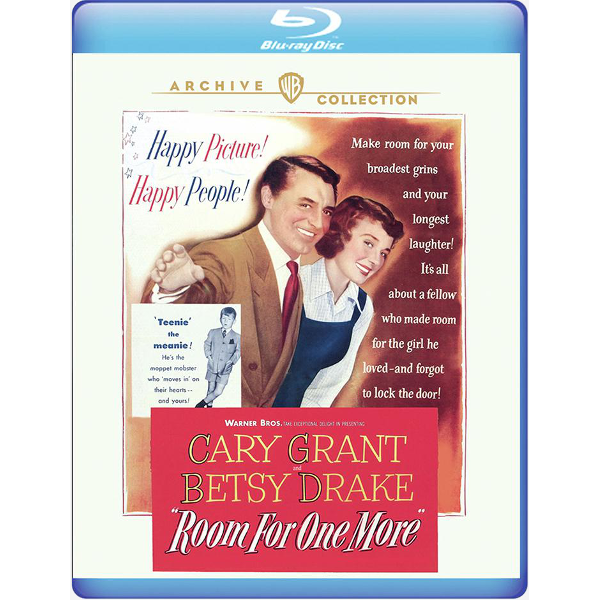 I normally can’t abide what passes today for ‘family values’ movies, as the thoughtful & warm likes of Friendly Persuasion has given way to outright fundamentalist fantasies or Neo-Heimat– style passive propaganda. But many vintage family pictures have drawbacks as well. Classic movies during the Production Code era had a way of evading reality, as when middle-class families in financial straits still had money to hire a maid, etc.. Hollywood’s ‘nice’ neighborhoods contrasted with modest ethnic tenements and dreary slums, but often shied away from real problems: alcoholism, spousal abuse, juvenile delinquency, underaged pregnancy. Those things only happened to ‘other’ people. Being non-white apparently only happened to ‘other’ people as well.

1952 was a prime Baby Boom year, when (statisticians said) housewives chose movie fare for the family. If ever a show appealed to a wife wanting to avoid another western, this is it: Room for One More‘s advertising promises a warm comedy with the tagline  “Happy Picture! Happy People!”  We can imagine Grant and Drake being drawn to the project’s positive social agenda. Author Anna Perrott Rose’s book is an advocacy piece giving social services a boost: orphanages overflowed with children adrift in the familial chaos of the postwar years. As Drake was already involved in various charities, a light comedy about becoming a foster parent fit right in. 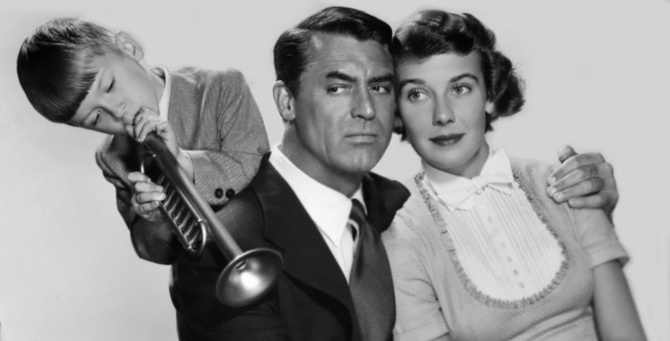 Workaday draftsman George ‘Poppy’ Rose (Grant) shows admirable calmness when his responsible but headstrong wife Anna (Drake) adds a fourth child to their family through Miss Kenyon (Lurene Tuttle), a foster program social worker. Unlike other PTA mothers that see inconvenience and even danger in taking in a foster child, Anna embraces young Jane Miller (Iris Mann), an angry and self-destructive 13 year-old suspicious of the Rose’s motives. Anna and Poppy win her over, slowly. Then Anna again unilaterally takes in Jimmy John Wilson (Clifford Tatum Jr.), an even more hostile child with a disability requiring leg braces. Understanding, patience and tough love win the day, aided by a great sense of humor.

Room for One More is serious but never too serious — it’s a celebration of good parenting. Grant and Drake’s close involvement with casting gives us believable child actors, and Norman Taurog’s assured direction avoids inane ‘cute’ effects. Grant seems to have discovered little George Winslow, a disarmingly honest & sober kid with a surprisingly deep voice.   ↓   Winslow would almost immediately continue with Grant and Howard Hawks on Monkey Business. Then came Gentlemen Prefer Blondes opposite Marilyn Monroe, where he was coached to say sexually precocious lines with his ‘Foghorn’ voice. In Room for One More Winslow is just a normal kid, and quite endearing. 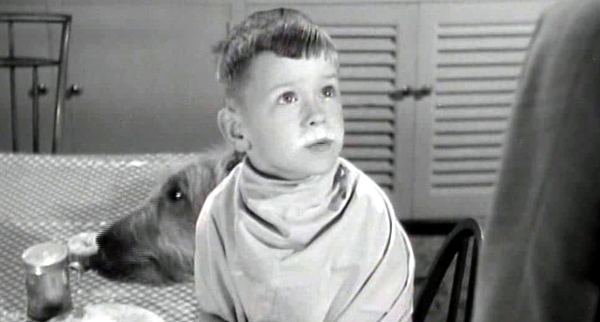 The opening scene in an orphanage gets the message across right away — prospective adopters want cute babies but the kids that really need help are older and often come with ‘issues.’ Miss Kenyon says that most are the offspring of unmarried mothers, a revelation that throws a chill over the slightly snooty PTA women. The Roses don’t live with perfect people in a make-believe happy movie town. Later on in the movie, Poppy Rose must defend his foster child Jane from the petty cruelty of a neighbor.

The child psychology by which Anna and Poppy reach their ‘problem additions’ is mostly thoughtful common sense. Jane is initially hostile and at one point Jimmy John even merits a spanking. When Jimmy John destroys a bicycle in frustration, we’re not handed any lectures about Freud; Poppy and Anna just Do the Right Thing and he eventually comes around. We do raise an eyebrow when Jane is set up to babysit for some friends, played by Randy Stuart and John Ridgeley. The idea is to show the perpetually enraged Jane that she’s valued and trusted, but there’s a baby involved, for cripe’s sake. We just remember that this isn’t a horror film and cross our fingers. 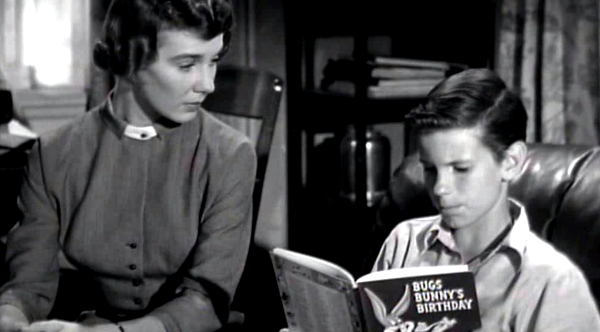 The Roses let Jimmy John work through his self-esteem issues at some risk. To earn his Eagle Scout merit badge he sets out to walk a number of miles on a snowy day, in his leg braces. Night is falling and it’s freezing out, yet nobody is thinking to call the cops to go look for the kid. Today the Roses would be locked up for child endangerment. Happily Jimmy John is allowed to channel his aggression into positive self-accomplishment. The Boy Scout ending is perhaps a bit much — you’d think he was being indoctrinated into an elite military corps. By the way, the Pledge of Allegiance is recited without the ‘under God’ addition made a couple of years later.

Betsy Drake is a prettier, more human version of Nancy Davis/Reagan. Her Anna makes all the family decisions, more or less ignoring Poppy’s protests that three children is already a heavy load. Of course, when it comes time to send Jane back to the foster farm or whatever, Poppy is the one to relent. Anna’s cheerful sweetness masks a firm determination to do what’s right, her way. Poppy seems to have accepted that fact a long time before.

Cary Grant could be indecisive and fickle about roles but his overall career judgment was very good. He turns what could be a mawkish film into fine entertainment. Skipping some dumb slapstick business with an inflatable life raft, Poppy spends the movie interacting with the kids, delightfully. This could be a template for the ’50s family sitcom: wifey Anna doesn’t work yet they can afford a house and a car on what looks like a modest job. Poppy is home every night at six. He even gets paid vacations.

Most of the film’s fun comes from Grant’s coy reactions, always understated. The five kids leave Poppy and Anna with no personal time together, through interruptions and even changes in the sleeping arrangements. Poppy’s sexus-interruptus remarks are amusingly frisky — excellent Grant material. When the family cat is revealed to have given birth to a large litter of kittens, Poppy says ‘she must have had a bicycle.’ I believe that’s an arcane insult-observation to describe a woman who ‘gets around.’

When Jimmy John is caught peeping through a window, Poppy responds with a sex education lesson that can only be called ‘charming.’ Take that, Production Code prudes. It dares to say that youthful peeping Tom behavior is normal curiosity. The scene then gets in its own sly jokes when Anna critiques Poppy’s visual aid, a drawing made in the sand: “Is that supposed to be a woman?” 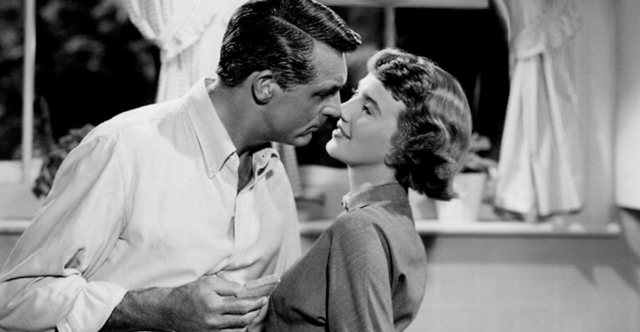 Room for One More might be seen as a continuation in spirit of Cary Grant and Betsy Drake’s first film from 1948, Every Girl Should Be Married. That broader comedy is about the ‘new’ postwar woman, an educated go-getter who plots to ensnare a perfect husband candidate and start the perfect family. By current 2021 ‘rules’ both the title and theme of Every Girl Should Be Married are P.C. poison, but the movie is a great discussion starter about changing gender roles. In Room for One More Betsy Drake’s Anna carries some of the same qualities in a more realistic vein — she’s very much a headstrong ’50s progressive who sets the agenda for her family. If the Roses went out to a movie, Anna would be the one to choose it.

Room for One More garnered especially positive reviews from publications hungry for wholesome fare. The New York Times’ crabapple Bosley Crowther griped about the mawkish elements, which to me are overcome by the charm of Grant and Drake. When referring to the running gag of Poppy’s frustrated sex life, the critic comes off as a borderline prig:

“There is a little more sport than need be made of the manner in which the children interfere with the cuddling of pa and ma. That’s an old joke, and being extended to the length of a running gag, it becomes not only tedious but just a wee bit unwholesome, we would say.”

What was Crowther’s problem? 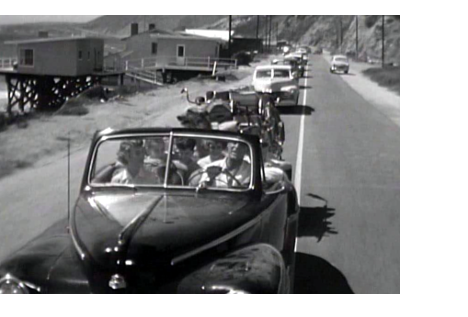 Other notes: ←  The family takes to the Malibu coast highway location for a vacation scene, and we pass by a long line of nice beach houses. At first we think they might pass the famous Kiss Me Deadly house, but it was farther North-West, alone and isolated. Our coastal commission later ordered the demolition of many beach houses erected on what would become public land.

Room for One More’s  foreign titles were nicely worded. In Spanish there’s “Hogar, dulce hogar” (‘Home Sweet Home’) and “Uno más no importa” (‘One more not a problem’); in German “Vater werden ist nicht schwer” (‘Becoming a father is not difficult’) sounds like something Poppy Rose would say.

I don’t know what the recommended new biography of Cary Grant offers about his wife Betsy Drake, but her Wiki page says that she wrote and was slated to star with Grant in another family comedy, about a widower finding a new woman who can handle both him and his children. A romance between Grant and Sophia Loren began on the set of Stanley Kramer’s The Pride and the Passion and everything changed. The marriage lasted until 1962 but Drake was replaced in the movie (Houseboat, 1958). Her screenplay was re-written by the Room for One More team, Melville Shavelson and Jack Rose.

The Warner Archive Collection Blu-ray of Room for One More is an immaculate encoding of this handsome show from 1952. Cameraman Robert Burks was just beginning a legendary collaboration with Alfred Hitchcock. This story doesn’t call for elaborate effects, but it’s clear that Burks was just as capable with all those easy-going scenes with the kids. Max Steiner’s music score is nicely adjusted to the film’s no-hype tone, even with the uplifting ending at the Boy Scout ritual.

This movie doesn’t register loudly on the 2021 Cool Meter and today’s average Junior College student doesn’t even know who Cary Grant was. But who can say what kind of revival-rediscoveries will come in the future?  Will some kid be recommending Room for One More to me when I’m ninety?  Grant and Drake are excellent together — the light comedy is adept and the parenting lessons sane.

For an extra the WAC gives us beautiful new scans of two WB cartoons from ’52. Bugs Bunny is stalked by Wile E. Coyote (who talks) in Operation Rabbit. Chuck Jones gets his cutesy act down pat for Feed the Kitty, the charmer about a bulldog who becomes protective of a little kitty cat.