Robert De Niro picks up a gun once again as a highly paid spy-mercenary-thief hired for a bit of international larceny, the robbing of a courier of some undisclosed secrets of one kind or another. Juicing up a Melville- like stoic crime fantasy with superb car stunt work puts director John Frankenheimer back in the game, with a worthy project. 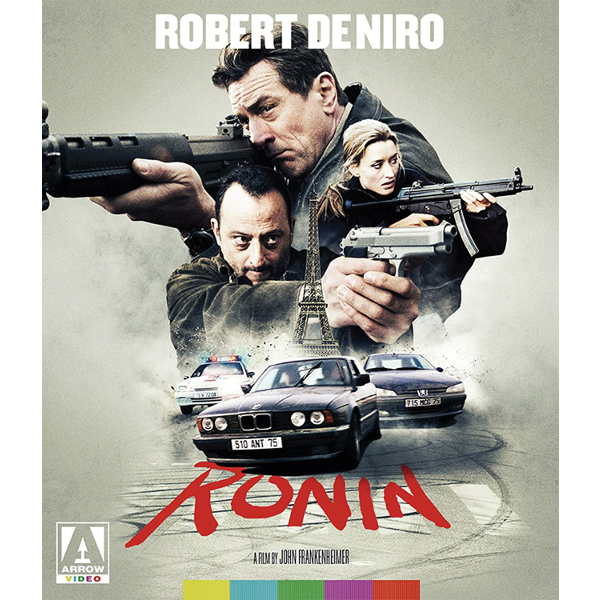 Ronin is something of a last gasp for the Mancuso-era United Artists (MGM), a lavishly appointed all-on-location major action picture directed by a great filmmaker on a late career rebound. Back in the 1960s legendary TV director John Frankenheimer mixed technical expertise and cinematic artistry in a series of fine pictures including the accomplished and innovative action films The Train and Grand Prix. Three decades later and after a particularly disastrous debacle, Ronin represents a major return to form for Frankenheimer. Made just a few years before genre filmmaking was overcome by super-heroes, special effects franchises and car crash spectacles based more on CGI pixels than real stunt work, this spy-crime thriller keeps its feet firmly on the ground.

Written by J.D. Zeik and souped up with terse tough-guy banter by a pseudonymous David Mamet, Ronin most resembles the minimalist crime pix of French director Jean-Pierre Melville. Think Le samouraï enhanced with big-scale action scenes, calculated to out-do James Bond and Co. for realism. In Paris, an undisclosed Irish concern recruits an eclectic group of criminals — freelance professionals — to steal a metal suitcase that’s being hawked for undisclosed millions to various international buyers, including the Russians. Irish contact / ringleader Deirdre (Natascha McElhone) does the hiring but refuses to give much in the way of information to her assembled mercenaries. American Sam and Frenchman Vincent (Robert De Niro & Jean Reno) are ex- spy agency employees that say they’ve signed on because they need the money; they become fast friends. Larry (Skip Sudduth) is a competent getaway driver, while electronic whiz Gregor (Stellan Skarsgaard) is sullen and secretive. The boastful Spence (Sean Bean) comes on like a pro but Sam and Vincent tag him as a pretender. Every step of the scheme to recover the suitcase is met with a double-cross, starting with an ambush on the banks of the Seine, when they try to buy a carload of guns. Our gang works out its own ambush to attack the motorcade transporting the suitcase, a heist that involves extremely hairy driving and gunplay. But a three-way betrayal pits partners against partners, as Sam and Vincent must pull in favors and work small miracles to yet again recover the all-important suitcase. They no longer know whom they’re dealing with either as enemies or ’employers,’ but they go forward on the promise of a bonus. Really, their persistence can only be rationalized as a Melville- like exercise in professional ethics. 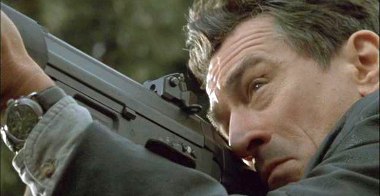 A lot happens in Ronin, which bookends every dialogue scene with an opposite but equal action set piece. Every action scene is whip-smart, precisely filmed and easy to follow, qualities that would disappear with the advent of the Bourne pictures that mangle simple continuity in the name of subjective excitement. Rather than being superhuman, our gunmen-heroes are just experienced enough to detect potential trouble before it arrives. Thus Sam smells a trap on the riverbank before anyone else, while Spence almost brings on disaster with his bonehead bash-in-and-start-shooting response. In keeping with the Melville attitude toward relationships, our criminals communicate with each other in ways that divulge as little information as is possible. This occasionally leads to rather nice scenes where the principals stand around trying to psych each other out. Gregor is a cold fish, Diedre a barely cooperative boss and Spence a loose-lipped hooligan. Vincent and Sam are sufficiently at ease with the situation to project a personal assurance, even if they evade questions like anyone else. When the deal is re-negotiated for much more money, we suspect as much as they do that their Irish employers never intended to pay off.

Sam apparently has medical experience in his background, a fact we discover when we he operates on himself to retrieve a bullet that has penetrated his body armor. It’s a worthy follow-up to the classic noir auto-surgery by Richard Basehart, in the 1948 He Walked by Night. Several of the crooks are excellent drivers. Various people get pulled in from the outside when help is needed. Sam contacts an old CIA buddy for a fast favor, right on the beach walk in Nice. The group stops off for Sam to recover from his slight wound with a mysterious but benevolent operative named Jean-Pierre (Michael Lonsdale of The Day of the Jackal). But Diedre’s contact Seamus O’Rourke (Jonathan Pryce) is bad news all around.

At a certain point in the story the entire basis of the mission is blown. It’s practically every man for himself, although Sam does try to protect Deirdre. Former comrades flip allegiances or go rogue-independent, and Irish and Russian guns are suddenly popping off in all directions. The narrative has its lapses but the hard-bitten pro characterizations remain consistently satisfying. The show stays on the rails even when the violence escalates and innocent bystanders are being shot.

I’m not sure that Frankenheimer and his action specialists have made anything all that stylish, but they succeed in communicating complex action well, earning our rapt attention. In almost any show nowadays, showoff angles, hyper-fast cutting and blurred movement (embellished with loud sound effects) give us an impression of action with little clarity or continuity. Frankenheimer’s adapted old-school approach gives us the information we need to participate in the action, not merely react to it. We SEE who’s doing what, who is effective and who is not, and can figure out for ourselves what’s going on without someone explaining it to us.

The movie’s gunfights are exemplary but the strongest material is a pair of car chases that rate with the best ever filmed. Trying to top his own The French Connection chase in 1985’s To Live and Die in L.A., William Friedkin made a car drive the wrong way on a Los Angeles freeway, in rush hour. Ronin makes Friedkin’s car gags look weak. For at least five minutes one car pursues another the wrong way through dizzying metropolitan tunnels, exchanging blazing gunfire and causing multiple wrecks. The thrills aren’t provided by clever cutting or special effects; what we see is really happening. Dozens of cars are being smashed up. It’s all highly suicidal and potentially murderous. And they aren’t funny ‘gags’ like driving through a truckload of Perrier water, although audiences did applaud when a slowly spinning upturned car leaves just enough room for De Niro and Reno to squeak past, like a cog in a gear.

The final shootout takes place at an Olympic Ice arena, with a Manchurian- like sniper threatening to kill the star ice skater. Whatever is in the aluminum suitcase is so valuable that the warring factions will shoot anybody to possess it (Somebody actually says, “What’s in the box?”). The chase and showdown among the panicked patrons is swift and brutal.

If the film has a visual design fault, it’s the slightly too obvious grayed-down art direction that follows the ‘remove bright colors’ philosophy of modern action grit. With all the characters doing their best stiff-lipped pro impressions Ronin is not particularly endearing on any level, and a section of the audience may find it all too dry. It’s not quite a refined existential exercise, as there are a few humanizing touches, and even a (gasp) kissing scene that may not be a cynical trick. However, the film’s title leaves the door open for major dose of pretension. The definition of a Ronin is given in an opening inter-title. That’s already too much, but in a figurative 7th-inning stretch poor Michael Lonsdale must recite a sober speech about the code of the masterless samurai, while painting his elaborate dioramas of leaden samurai warrior miniatures. Oh, well, the one scene is better than having lame art film-speak salted all the way through the film. Elsewhere in the picture, the smart little quips and verbal snipes heard from the assembled mercenaries range from somewhat strained to agreeably pithy. They may or may not be the work of unbilled writer David Mamet.

The fun in Ronin is seeing how adroitly the various good guys and villains improvise when faced with new situations, making old-fashioned crime action seem fresh again. I think the trend today may be turning away from special effect magic and back toward action we can see and believe. At least, I hope so. I’m still waiting for some daring film to put a different title card up at the beginning, one claiming that no digital effects were employed to fake dangerous situations. I want to see that movie. 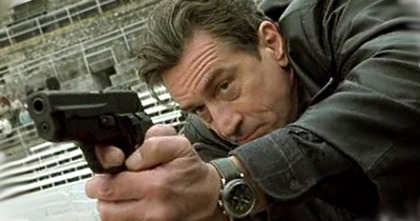 Arrow Video USA’s Blu-ray of Ronin once again shows the company going to great lengths for a high quality product. The disc info claims that Arrow commissioned a 4K restoration on its own dime, and brought in the director of photography Robert Fraisse to supervise it. Perhaps Arrow gets a better deal from MGM by contracting to do their restoration work for them? The flawless image is a sterling recreation of the film’s silvery look, besting by far the previous DVDs I’ve seen.

Arrow includes all of MGM’s older featurettes (listed below) plus the original Frankenheimer commentary. New pieces give us cameraman Robert Fraisse’s views on the film, and an in-depth look at Robert De Niro. Still of interest is an unused ending, seen as Avid output. I like very much the observances of insert booklet essayist Travis Crawford, who describes Ronin well in the context of star careers and the history of crime/spy caper films. The technical details and innovations to obtain such realistic chase and crash scenes can be quite impressive too – I love the idea that Frankenheimer used special cars with double steering wheels, only one of which was operable. The stars faked their steering, while stunt drivers did the real driving in the passenger seat. I couldn’t help noticing that cast members Jonathan Pryce and Sean Bean may have been playing out their MGM contracts, following up on roles in ’90s James Bond movies.