Arrow Video bumps yet another of its top special edition titles up to 4K Ultra HD, just for home theater enthusiasts after the best and brightest of big screen experiences. The movie looks better than ever, and although the unrated version still packs too much gore overkill for average viewers, we respect the Horror-Comic vibe it was meant to conjure. As sci-fi satire Robo still carries a big stick: Edward Neumeier’s anti-corporate, anti-privatization message comes through loud, clear, and profane. The last time I reviewed RoboCop I all but wrote a book instead of a review; hopefully I’ll pare that down some on the way to evaluating this stunning new release, the original 1987 RoboCop in 4K Ultra-HD. The movie still knocks me out. My interest in the gore effects has dropped, and I can’t say I needed the film to be quite so graphic, but who’s to argue with something that works so well?  It may be Jon Davison’s most impressive job of producing: despite limited funds he gave the mad Hollander Paul Verhoeven everything needed to make a science fiction landmark production every bit as original and powerful as the genre classics.

The major science fiction picture Robocop is not afraid to let loose a shock & awe show. As with the earlier Mad Max, the story of Murphy the cop ignores prevailing mainstream movie rules about restraint and ‘niceness.’ Paul Verhoeven’s previous movies from the Netherlands were often squeamish or unpleasant but Robocop was so into ultra-violence that Orion toned it down to avoid the dreaded ‘X’ rating. The uncut version is still a shocking experience and not for the visually timid. A part of me wishes that Jon Davison had made secret audio recordings of the MPAA’s reactions to the uncut screening.

RoboCop is the best and the most important Science Fiction film of the 1980s. In it we see the influence of the French Métal Hurlant and other graphic novel comics. It has the comic book verve of Mario Bava’s graphic-savvy Diabolik plus a strong Verhoeven-added strong horror-comic vibe, and its political satire has sharp teeth. We immediately recognized Verhoeven’s future as a frontal assault on the Ronald Reagan regime. One might think that an incorruptible and heroic robot policeman would make for good children’s entertainment, but the thrills are far too adult. RoboCop is both funny and disturbing: we laugh even when it hurts. An unstoppable Marshall Dillon in a Blue-Grey Kevlar Suit, RoboCop prevails over criminals on the streets and in the boardrooms. The futurism is all political and all pessimistic: it’s OUR future of (gasp) rampant privatization.

Here’s a stripped-down synopsis. Exploiting a crime wave on the streets of Detroit, Omni Consumer Products Corporation steps into the breach with an offer to privatize the police force. OCP VP Dick Jones (Ronny Cox) has developed an ‘urban pacification’ robot called ED-209, but it has serious malfunction issues. To fill the gap while ED-209’s bugs are worked out, OCP’s CEO ‘The Old Man’ (Dan O’Herlihy) gives hotshot junior executive Bob Morton (Miguel Ferrer) the go-ahead for his competing RoboCop prototype program. Morton uses what’s left of the terminally-wounded policeman Alex Murphy (Peter Weller) as the basis for a surgically-constructed part-man, part-machine cyborg. Programmed to be the perfect patrol officer, the intimidating, bulletproof robot man lives only to enforce the law. His initial forays into the mean streets of Detroit are a remarkable success for OCP, but unforeseen complications ensue. Spurred by contact with his former duty partner Officer Anne Lewis (Nancy Allen), the ‘dead’ Murphy’s personality reasserts itself through memories of his lost family. Robo’s investigations eventually lead him to suspect a connection between criminal gangleader Clarence Boddicker (Kurtwood Smith) and OCP’s own Dick Jones.

Paul Verhoeven’s tight direction and Frank Urioste’s slick editing turn this movie into and action juggernaut. Preprogrammed for any contingency, Robo confronts and ‘resolves’ criminal activity with brutal efficiency, without hesitation. He offers rape counseling to a distraught woman, and sober advice to admiring kids: “Stay out of trouble.” RoboCop is a worthy original and perhaps the best fantasy character since the heyday of Universal’s monsters. The crooks can’t stop him, but he suffers from a unique identity problem: Dick Jones has added programming that prevents him from enforcing the crimes of his own creators.

RoboCop can be seen as an inside-out remake of Fritz Lang’s Metropolis. Using high technology and Reaganomics, a corporate elite is reorganizing America so big business can operate without limits or restraint. Private companies don’t have to worry about elections and public opinion is easily ‘managed.’ OCP seizes Detroit by cutting funding to its police force and presenting itself as a better alternative. To keep the citizenry in line, Dick Jones underwrites the criminal terror he’s supposed to be eradicating. OCP is a criminal enterprise, plain and simple — the Law is just another obstacle to bigger profits.

OCP is also a wicked parody of the traditional Old Boy’s Club. Dan O’Herlihy’s outwardly benign Old Man pits his hungry junior executives against each other in a competition that easily becomes murderous. Writers Ed Neumeier and Michael Miner derive some of their satire from the old go-getter models in How to Succeed in Business Without Really Trying and The Apartment. The connection is made explicit when Miguel Ferrer’s Bob Morton eagerly clutches his new perk, an access card to OCP’s executive men’s room.

“Guns, guns GUNS!” — now if that isn’t a fitting epitaph for what American culture deems important.

Paul Verhoeven once said that when he arrived from Europe he was shocked by how gun-crazy America was . . . and then he makes THIS. The political satire of RoboCop has resonance because the story has been shaped like a modern myth. Alex Murphy is an epic hero in that he ‘dies’ and is resurrected, a rite often portrayed in myth as a journey to and from the underworld. Verhoeven claims that Murphy is sort of a Yankee Christ, agonizing at the hands of the Devil (Boddicker) and returning to kick ass. RoboCop even ‘walks on water.’ Reinforced by Basil Pouledoris’ dynamic, pounding music score, Robo is an intimidating metallic Golem in pursuit of criminals: “Dead or alive, you’re coming with me.” Yet the music becomes stirringly emotional when RoboCop uses the remaining bit of his brain to remember his idyllic life with his wife and boy. That human connection is what went missing in the ambitious sequel Robocop 2.

Writers Ed Neumeier and Michael Miner provide great material for every goon and gunsel in their script. The cocky Miguel Ferrer sneers in the face of poor police sergeant Robert DoQui. Henchman Ray Wise (Twin Peaks) foolishly tries to kick Robo in his chrome steel crotch. The hapless thug Paul McCrane suffers a deliciously gross toxic-waste comeuppance. For additional stabs of satire, the action is frequently interrupted by video ‘media breaks’ that feature disturbing TV commercials and cheerily depressing news anchors. The jokes are not flung about at random. Neumeier and Verhoeven’s message is that America is finished: corporate skyscrapers may flourish in the city center but the grassroots American economy is all but dead. The big action finale takes place in an abandoned steel mill. Once a symbol of American industrial might, the gigantic edifice might as well be an Egyptian ruin, built for a purpose nobody remembers. 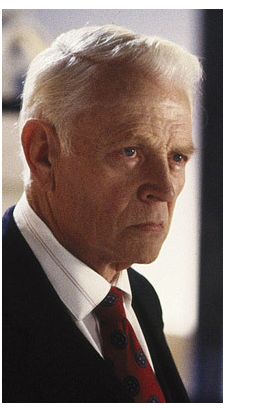 Despite the tight budgetary limits producer Davison saw to it that the central character RoboCop was not short-changed. The beautifully designed metal man functions marvelously, animated by Peter Weller’s rigorous pantomime. A battery of delicate sound effects suggest that Robo is actuated by hundreds of little motors that constantly adjust his posture and gestures — he’s programmed to impress as a Mean Mother. Rob Bottin needed a full support crew to handle the complicated suit during filming. Robo’s movements were limited. For instance, he couldn’t enter or exit a car, a detail well-hidden by Verhoeven’s prowling camera.

The effects makeup people go to even more trouble to depict Robo without his helmet. We see a recognizable Peter Weller, his own face faked to look like a mask over a metal skull. Rob Bottin’s artful work took our breath away– who expected such subtlety amid all the gory excess?

Arrow Video’s impressive 4K Ultra HD Steelbook of RoboCop is not a new restoration. Its 4K scan was taken from the original camera negative by MGM in 2013 & approved by director Paul Verhoeven. A 2019 downconvert to HD became the 2019 Limited Edition Collector’s set. If I read Arrow’s text correctly, this 4K disc goes directly to the improved format. Viewers shouldn’t expect different content or colors, but simply more detail and (with HDR) a wider, deeper range of contrast.

Can we thank Volker Schlöndorff for bringing Jost Vacano to international attention?  The veteran German cameraman knocked us out in Paul Verhoeven’s best films, from the superlative Soldier of Orange forward. (Arrow, Powerhouse Indicator — somebody nab Soldaat van Oranje for Blu or 4K!)   I recently got to see the 4K disc of Verhoeven’s Starship Troopers, which is even more lush in appearance. RoboCop has a slightly more metallic, gritty appearance, but it still knocks us out with its rich images. I don’t know how they did it, but in 4K even some of the rear-projected stop-motion scenes look smoother, with less grain. The purposely degraded TV news images and commercials are as grungy as ever; Robo’s Robo-Vision imagery is as sharp as a tack.

Comparing lists, I see that Arrow has ported over the exhaustive extras from the 2019 disc. I did a side-by-side comparison and I think they’re all there; if Arrow added something new they haven’t called it out. Actually, their description notes that some outtakes of the edited-for-TV version are newly transferred from 35mm instead of video. That cleaned-up TV version is pretty crazy — with some very creative replacement ‘inoffensive’ dialogue.’ I’ve kept Arrow’s contents description below just as I received it, to avoid confusion.

As with the old Blu-ray set the extras are spread across the two discs, with the unrated and theatrical cuts. I checked to make sure, and both discs are indeed 4K Ultra-HD … no Blu-ray disc is included in the Steelbook edition offered for review.

I once heard someone complain that RoboCop only panders to a commercial audience of ghouls that delight in overkill gore. I really don’t think that’s true. Both this show and RoboCop 2 are adult pictures that take their ‘R’ ratings seriously. Had the director and producer aimed for maximum exploitation profit they would have trimmed their show just enough to get a PG-13, dropping most of the profanity, softening disturbing elements and pushing most of the carnage just off-screen. The movie would be just as violent and rude and inappropriate for small kids. The pre-teen crowd would jam in, and everybody would have made much, much more money.

When on the defensive, Verhoeven sometimes reasoned that his extra gore is actually less disturbing, citing the Herschel Gordon Lewis argument that it’s so exaggerated, it’s funny. I personally never bought that line of thought, yet we can tell that these filmmakers believe in what they’re doing. RoboCop could have easily have earned five times as much had it been more family friendly. But then it wouldn’t be the unique adult entertainment that it is.