Why do crime caper films have so much appeal?  Are we all closet criminals, eager to watch less timid souls risk life and limb to get the big payout and live happily ever after?   Peter Yates’ stylish re-telling of England’s Great Train Robbery makes for an excitingly detailed, nonsense-free heist straight from real life, with a just-the-facts clarity. The show begins with an influential car chase — straight through the heart of London. 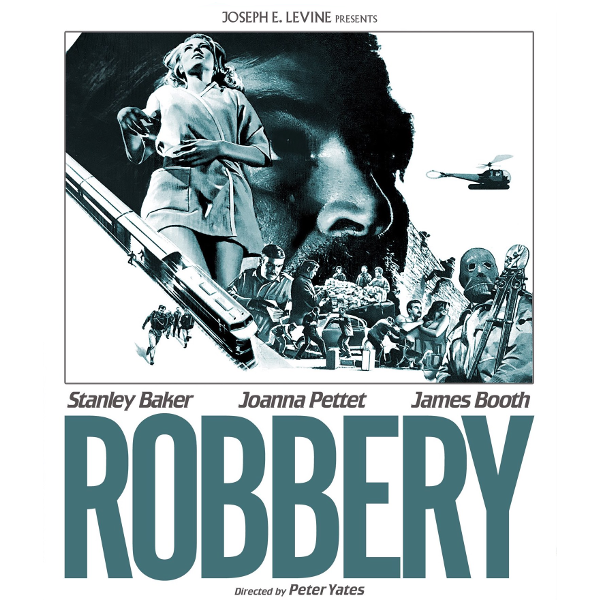 I’d always heard about Peter Yates’ Robbery, a slick & sophisticated cops ‘n’ robbers heist film based on the real Great Train Robbery in England in 1963. As with the terrific French crime pictures of the middle ’60s, Robbery didn’t rate many bookings in the states. But it definitely got the attention of the film industry. Robert Relyea and Steve McQueen took one look at its opening car chase scene and signed up the film’s director for their Solar production Bullitt.

Adapted from a nonfiction book, the movie is a straight policier that begins with the stark facts of the robbery, and adds just enough detail to carry the movie. Little or no dramatic license is taken with the characters — there are no outrageous twists, literary allusions or thematic pretensions. There’s a key robber and a key detective, but nothing links them as amoral ‘mirror images’ of each other, a motif that plagues too many newer crime films. Forget arcane motivations. The crooks want to steal millions of dollars and the cops want to catch them. By minimizing extraneous dialogue and context  Robbery looks forward to crime films that concentrate on the excitement of the chase, with a you-are-there immediacy. Even without hyping the action or violence the suspense is nail-biting.

The show begins in mid-crime, forcing us to play catch-up to learn who is who and what exactly is going on. Several polished criminals in a Jaguar and a stolen ambulance stalk a fancy Rolls Royce on the streets of London. Is it an assassination? A kidnap? A few minutes later they’ve committed their crime, but sharp-eyed police spot the purloined ambulance and a mad chase is on. Only afterwards do we realize that the leader behind the successful raid wasn’t even present. Paul Clifton (Stanley Baker) plans and executes slick crimes with a handpicked crew of pros that hold down day jobs — garage mechanic, stock clerk. Paul keeps his beautiful wife Kate (Joanna Pettet) insulated from the activities that have gained him a fancy house and lifestyle. As Kate is no dummy she intuits that he has something big brewing.

Paul’s next caper could become the crime of the century: an audacious mail train robbery. To pull it off he needs a larger crew, vehicles, escape routes, and an expert to identify and sort out the millions in currency they’ll be taking. Paul and his close associates Frank (Barry Foster of Ryan’s Daughter and Frenzy), Dave (William Marlowe) and Jack (Clinton Greyn) must recruit additional top-rank thieves through another mobster, Ben (George Sewell of Get Carter). Paul bankrolls a prison escape to obtain the services of a white collar currency expert, Robinson (Frank Finlay). Meanwhile, Inspector George Langdon (James Booth) is already on the case because he knows something’s up. As the leader of an anti-crime ‘flying squad,’ George’s intuitions are taken seriously. He has a member of the gang under arrest but he can’t get anybody to grass (squeal) about the planned big heist. A three-day bank holiday is coming up that Langdon thinks is the perfect time for a big bank job.

We see immediately why Steve McQueen would go for Robbery’s director Peter Yates. The show uses is no expository narration, no ‘scene setting’ or detailed establishing of characterizations. The first shot is of a stopwatch, and we’re immediately thrown into the mechanics of a complicated street crime. The first reel of Robbery is pure action in the modern sense. McQueen must have been blown away by the docu-real car chase, which concentrates on fast cars careering through crowded streets and uses no (perceptible) rear projection. Small cameras had just made ‘run & gun’ filming on the streets a practical reality, and Robbery’s Douglas Slocombe pulls out all the stops. Before 1967 car chases had seldom been filmed ‘in public,’ clearing streets of other vehicles: it was cheap Second Unit work done by a stunt director using the back lot. When movies shifted the emphasis from clever dialogue to realistic action, Second Unit action work became First Unit work.

Before this film the most realistic car chase scene was probably the finale of Don Siegel’s 1958 The Lineup, which takes us on a near-impossible high speed chase in San Francisco, from the Cliff House and Sutro’s Baths across the coastline and into downtown, ending on a half-constructed freeway. The streets are real and the cars are real. Some shots might be sped up a bit, but the cars bank sharply in the curves. Robbery’s London topography appears to be authentic as well — commentator Nick Pinkerton gives us a rundown of passing locations as detailed as a GPS.

This was Peter Yates’ third feature credit but he was well suited to the task from his experience assistant and second unit directing (The Guns of Navarone) and directing episodes of TV’s The Saint and Secret Agent. Yate’s direction is clean and clear — shots make their point without lingering too much on atmospherics or introspection. The whole filming team seems in agreement with the ‘lean and dry’ tone — producer-star Stanley Baker purposely plays his kingpin character as an open question mark, and his jolly crew includes no informers, cowards or incompetents… up to a point. Your average caper film gives us schemes within schemes, counterplots and double-crossing left and right. It’s a relief to see such honest thieves at work — none of them is a cheat, or wants to see anyone get hurt. They remind me of the cheerful smash ‘n’ grab crooks in old cartoons in the English humor magazine Punch — I remember one with a crook in a jewelry store, nicely dressed but also wearing roller skates to help his getaway.

Joanna Pettet is given one scene to vent some wifely frustration at her husband, but when the pressure is on she becomes a cool customer as well. The most colorful player on view is James Booth’s inspector, who shows a sense of humor and a non-neurotic belief that all bad guys get caught, eventually. Frank Finlay plays it quiet as the convict unhappy because he cannot contact his wife or see his child.

Robbery advances the caper film beyond the standard established by Jules Dassin’s 1955 Rififi, with its 30-minute silent heist sequence set within a highly dramatic framework. In 1967 England viewers were very aware of the ’63 Great Train Robbery and could tell that Gerald Wilson’s story followed events and specifics very closely, from the stopping of a train with fudged rail signals to the expert removal of two truckloads’ worth of money. The heist has its minor fumbles. Time is lost while train crew wander astray, and a hired locomotive driver suddenly cannot operate the engine. We know that Paul has an exceptionally good team when they leave several money bags behind because time has run out. That’s good discipline.

Almost in documentary fashion, the docu makes English crime seem more civilized than most heists in the States. Nobody carries guns — Paul Clifton won’t have them because the train guards don’t carry them. The heist etiquette on view ranks with Robin Hood’s gentlemanly plundering. Planning and logic are everything — we only hear one character mumble that he keeps a gun in the house because he doesn’t intend to ever go back to prison again. We also know that this was a different age, simply because nobody rats on their pals. Was there no turning state’s evidence in England?   Imagine, crooked comrades one can trust!  I thought honor among thieves was a myth.

The cops come off extremely well too. A radio dispatch officer oversees the auto chase with great efficiency. George Langdon’s ‘flying squad’ is a reserve unit poised to respond quickly to unexpected crimes. Langdon doesn’t rough anybody up yet he pretty much already knows who he’s after. Even the requisite lineup scene puts the cops in a good light — it looks very fair. A teacher (Rachel Herbert) is brought in to identify the getaway driver who almost ran over her pupils. If she recognizes the driver in the line, she’s asked to touch him. In the film’s most overt violent act, she instead gives him a powerful SLAP!

In the final analysis this is a slick, high-class semi-docu accounting of how a ‘Crime of the Century’ went down. As in real life, nothing’s perfect. In the real Great Train Robbery, a couple of the crooks got clean away, and over half a century later they’re still trying to close the case. This movie version maintains the feeling of an incredible crime that didn’t completely fail. It doesn’t seem likely that any escaped crooks are going to end up sitting under a palm tree somewhere, sipping martinis. Crime fans looking for sex and mayhem may find Robbery lacking but the rest of us will appreciate a heist caper tale with a bold new style. I particularly like the film’s utter lack of cheap psychoanalysis — Paul didn’t become a crook because somebody stole his puppy, and George isn’t doing police work to avenge a beloved brother.

The KL Studio Classics Blu-ray of Robbery is a terrific encoding of this long-awaited landmark Brit crime spectacular. In HD on a sizable monitor we can appreciate the exciting chase scenes that tease the docu look with dynamic angles and slightly wider-than-normal lenses. The beautiful production commandeers whole neighborhoods in London, a disused aerodrome in the country, and the interiors of gambling clubs and posh restaurants.

Kino offers a trailer and one dedicated extra, an informative and detailed commentary by Nick Pinkerton. Here’s one of Pinkerton’s excellent Film Comment essays, on the films of Jacques Tourneur.

A good 2015 Robbery Blu-ray from Network has some attractive interviews, a making-of documentary and even BTS footage, but it’s less accessible due to being Region B.