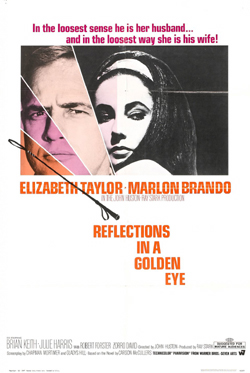 Reflections in a Golden Eye

Burt Lancaster and Montgomery Clift both wanted to play the lead in John Huston’s adaptation of Carson McCullers’ Southern Gothic novel. But after Clift’s death Huston chose Brando to play the US army major whose obsession with serviceman Robert Forster leads to disaster. Brian Keith is especially good in support. Imagine this being made by a major studio today!