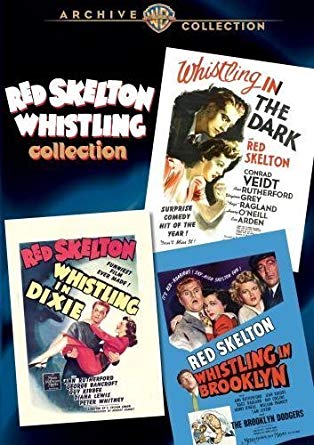 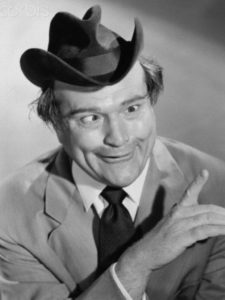 One night in 1950 during an especially frenetic episode of The Colgate Comedy Hour, Jerry Lewis stepped away from Dean Martin to address the camera point blank – “You get the idea – I’m supposed to be a 9-year-old kid.” Hardly a revelation – especially to Red Skelton, the reigning king of prepubescent horseplay.

That reign was begun in 1923 and fueled by broadly played gags that were both leering and infantile – like a burlesque version of The Bad Seed. One of Skelton’s most grating characters was a wisecracking brat called the “mean widdle kid” – wearing short pants and lace collar while delivering grown-up one-liners in baby talk he was a less feral version of Joe Besser’s petulant man-child Stinky (one of the more surreal aspects of the Abbott and Costello TV show.)

Skelton’s schtick was not just warmed over Baby Snooks – sometimes he spiced it up with a drunk act or mimed an ungainly hausfrau’s attempts to squeeze into a girdle – he saw each character – the world, really – through the eyes of a goonish adolescent. 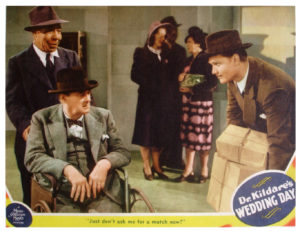 At the ripe old age of ten Skelton had begun finding work in increasingly sophisticated venues – medicine shows, showboats, vaudeville and radio before landing at Metro-Goldwyn-Mayer where he trespassed onto otherwise serious dramas like Flight Command and Dr. Kildare’s Wedding Day as comic relief from the maternity ward.

No one could confuse the zealous comedian with Lionel Barrymore – those high profile cameos led to his first starring role in 1941’s Whistling in the Dark, a suspense comedy based on the play by Laurence Gross with production design by Cedric Gibbons (The Wizard of Oz and The Band Wagon) and directed by S. Sylvan Simon. 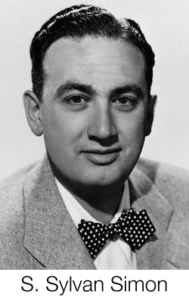 Simon made his bones directing screen tests at Universal before helming double feature fare ranging from romance to westerns. He was all of 31 when he checked in for his next assignment where he proved to be something of a miracle worker – he made Red Skelton, an overbearing presence even in his best moments, endurable for 78 minutes.

The young director performed this bit of cinematic sleight of hand – misdirection if you will – by surrounding the hyperactive newcomer with expert comediennes and no-nonsense actors while keeping the action swift, stylish and even downbeat when appropriate. Some of this may have been an attempt to placate nervous studio suits should Skelton fail to carry the film by himself. 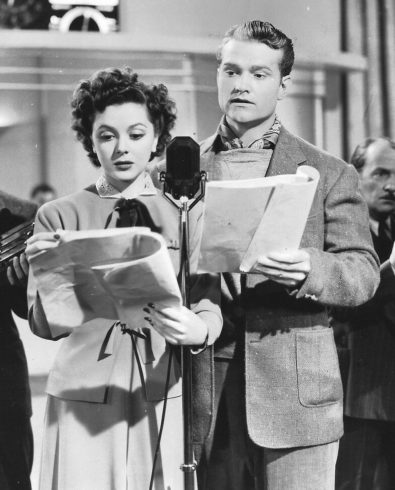 They needn’t have worried, Simon’s approach worked like like a charm – the film was so popular it led to two sequels – all three have been collected by Warner Archive in the Red Skelton Whistling Collection – though in a just world it would have been titled the S. Sylvan Simon Collection.

MGM, protective of its regal reputation, tended to focus on the business end of funny business and once comedians like the Marx Brothers – born to mock regal reputations – were on Leo’s payroll the laughs were fewer and the plot-stopping musical numbers grew and grew (A Day at the Races is exhibit A).

The adventurous Simon used the studio’s penchant for opulence to realize his own slapstick vision – spring loaded set pieces with exquisitely tailored actors cavorting among elaborate stage flats that suggested a meeting of Busby Berkeley and Rube Goldberg. 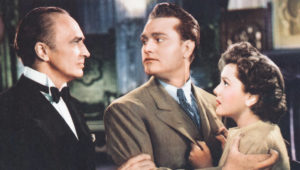 Benton’s peculiar hobby is like honey to the tent-show charlatan Joseph Jones who’s looking to extinguish a bothersome interloper (this avuncular snake in the grass is played to a T by the suavely sinister Conrad Veidt). Jones kidnaps Benton for some extra legal help in getting the dirty deed done and the Whistling series is off to the races. 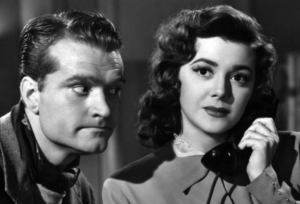 Ann Rutherford, the quintessential pin-up next door, plays Benton’s long-suffering girlfriend and Rags Ragland is Sylvester, a dim-witted crook with a heart of gold (he would tread the straight and narrow in the sequels). Spicing up the sidelines are Eve Arden and Virginia Grey as Benton’s press agent and potential sweetheart while perennial bit player Emmett Vogan lends his familiar profile to the proceedings as a radio exec (he performed a similar role for Bob Hope in The Ghost Breakers). 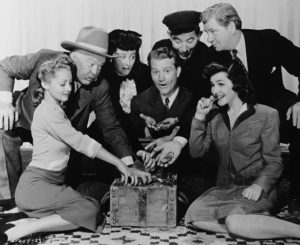 Whistling in the Dark was followed by the most compact and purely pleasurable film of the series, Whistling in Dixie, a 74 minute lark with Benton stumbling through sleepy but creepy Dixon, Georgia as he investigates the disappearance of Rutherford’s old school chum.

A search for Confederate treasure and a flooded vault add laughs and some genuine suspense to Skelton’s second star outing with expert support from Guy Kibbee, Peter Whitney (the murderous identical twins of Murder, He Says) and George Bancroft (of von Sternberg’s Underworld) – the shady sheriff would be Bancroft’s final screen performance. 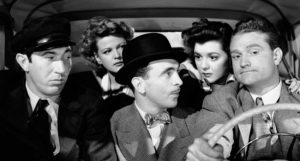 For the third and final entry Simon and crew basked in Cedric Gibbons’ Gershwinesque vision of New York – filmed on location, Whistling in Brooklyn is nostalgia heaped upon nostalgia with poignant silhouettes of Manhattan skylines, New York sidewalks and Ebbetts’ Field – not to mention the fellas that played there, the Brooklyn Dodgers of 1943 (player/manager Leo Durocher “plays” himself).

The bumbling Benton is the prime suspect in a murder spree actually the work of a publicity-happy serial killer known as Constant Reader. The grand finale takes place at the ballpark, naturally, as Skelton leads the police, the killer and the Dodgers on a mad chase past the seventh inning stretch. 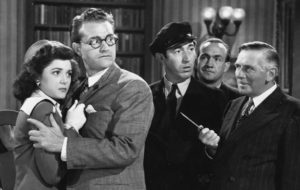 The Whistling films were never so New York thanks to those wistful street scenes and the presence of Ray Collins (Citizen Kane and Lt. Tragg of Perry Mason), Sam Levene (Sweet Smell of Success) and the peerless curmudgeon William Frawley (who made more than his share of baseball movies).

Skelton and crew went on to long careers with Red ruling the airwaves for over two decades (he saw TV as his best soapbox). Simon continued his light comedy ways, directing Abbott and Costello in Hollywood and Skelton in 1948’s The Fuller Brush Man (where Simon’s fascination with super-sized slapstick sequences reached its apotheosis.)

In 1949 he directed Lust for Gold, a dusty adventure with overtones of Treasure of Sierra Madre and a rough and tumble turn from Ida Lupino before producing what would be his most acclaimed film, Born Yesterday, directed by George Cukor in 1950. Simon died just one year later at the age of 41 leaving a modest but significant legacy.

Warner Archive’s set puts each film on its own disc with no extras save the film’s trailers. The prints have some noticeable grain but the shadowy cinematography of Sidney Wagner (The Postman Always Rings Twice),  Clyde De Vinna (Tarzan the Ape Man) and Lester White (The Monster that Challenged the World) is given a fine showcase.