Trucks for victory! No deadheads on this run! Bald Tires for Adolf! Budd Boetticher’s two-fisted teamsters haul General Patton’s supplies through a France not completely cleared of German resistance, a gearshift in one hand and a buxom mam’selle in the other. The movie is not bad, especially in the casting department — it least includes some black troopers to portray a mixed outfit that was more than half black. Red Ball Roughneck roll call: Jeff Chandler, Sidney Poitier, Alex Nicol, Hugh O’Brian, Charles Drake, Bubber Johnson, Davis Roberts. At Ease. 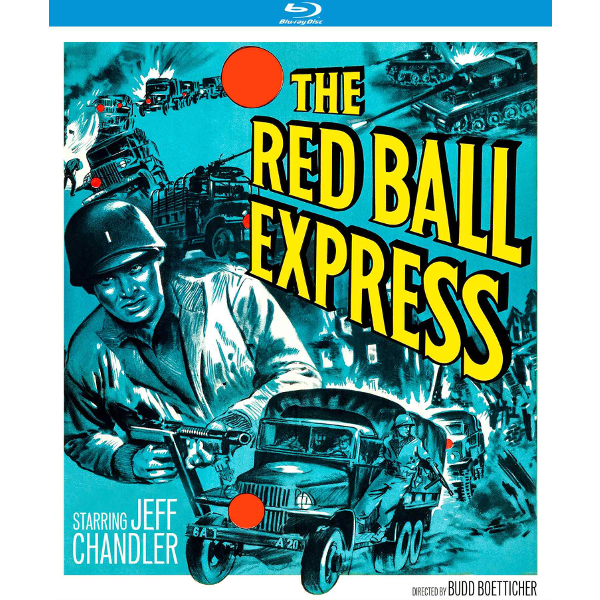 Combat films took a short break after WW2 but bounced back in 1948 with patriotic hits like The Sands of Iwo Jima with John Wayne. The trend continued in some major pictures that pleased veterans with their general accuracy — Battleground,  Twelve O’Clock High (both 1949). Less distinguished WW2 pictures were still being made when Americans were fighting in Korea. Jingoistic slogans and high-times-with-the-dolls comedy didn’t go over so well with troops fighting in a remote land, without defined goals. The lame movie advertising tag lines read over the public address system in the irreverent M*A*S*H (1970) tell that tale. 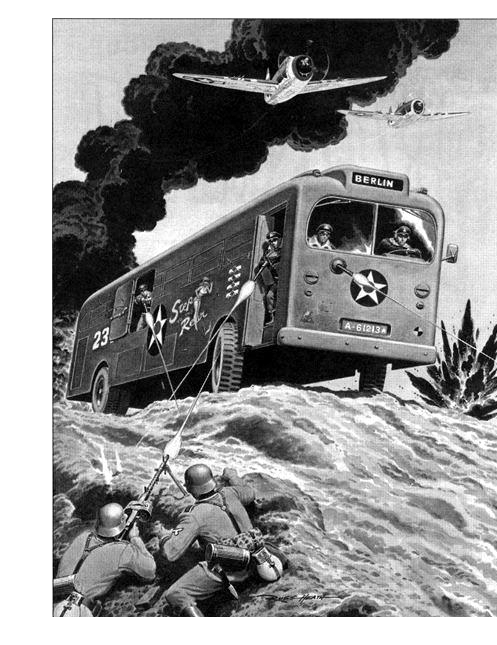 Around the same time the satiric The National Lampoon magazine pointed up the ‘patriotic’ habit of elevating every last detail about WW2 to a legendary, tougher-than-thou level. One issue featured a minor humor article called “Battling Buses of WW2,” that illustrated a number of valiant combat vehicles. All are simply converted buses — yet No Ordinary Buses! We won the war with those buses, you long-haired hippie punk! ( → )

Your old man may have served well as one of tens of thousands of Army file clerks, but our culture insisted that every real Dad went through the war under a camouflage helmet, with the pin of a grenade clenched between his teeth.

How many war movies have we seen where an impossible task falls to one lone patrol, or a maladjusted commando squad, or a few suicidal air raiders?  It’s always “The Only Thing that Can Save the Battle Front,” or “The Daring Mission that Turned the Course of the War!” 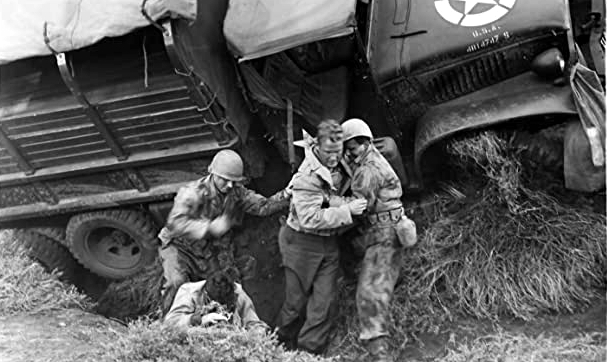 Not all important missions are as glamorous as Toko Ri or Macho Grande. The Red Ball Express at first sounds like a joke about battling teamsters. We aren’t claiming that it’s a high point in the war movie genre. But the earnest, honest thriller doesn’t disrespect its subject, despite a telling inaccuracy here and there along ‘Oo-La-La Route to the Rhine.’

The medium-budget Universal-International production likely took advantage of the U.S. Army’s delight in seeing praise usually reserved for combat pictures diverted to honor a behind-the-lines service function. An Army base supplies a battalion of trucks and the forests of Virginia stand in for France. A few tanks also appear but I’m not sure any of them move. U-I sent along what looks like every male contract player on the roster, and a few more. All acquit themselves decently enough against a string of stock situations and corny dialogue. Said screenplay may have been a stepping stone from radio to film for writer John Michael Hayes — a few pictures later he’d pen a prestigious four-film string of Alfred Hitchcock thrillers, starting with Rear Window.

The Red Ball Express’s seven-minute prologue explains that after D-Day, General Patton spent weeks ignoring orders and racing his tank units across France. He went so far so fast that normal support services couldn’t keep up. The army had no choice but to turn the roads of France into highways for thousands of trucks to rush gas, food and other supplies to the tanks on point. The maximum-effort Red Ball Express mission was a logistical nightmare that ran a round-the-clock unending flotilla of trucks 240 miles long. 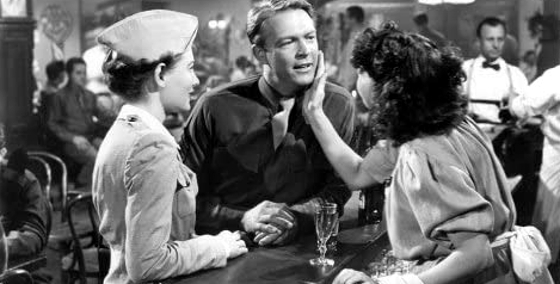 Budd Boetticher directs efficiently even if there’s nothing he can do with the script’s low-grade character conflicts. The capable Lt. Campbell (Jeff Chandler) must lead a Red Ball unit made up of cast-off personnel from other outfits. The high-end conflict?  Sergeant Kallek (Alex Nicol) blames Campbell for the death of his brother in a baking trucking accident back in the states. Black troops Robertson, Taffy Smith and McCord (Sidney Poitier, Bubber Johnson & Davis Roberts) must weather derogatory treatment from the bigoted Pvt. Wilson (Hugh O’Brien). Boastful would-be writer Partridge (Charles Drake) befriends a French girl (Jacqueline Duval) on the road. Pvt. Higgins (Frank Chase) provides squeaky-voice comic relief. Actor Jack Kelly is along for the ride, without much to do. Red Cross hostesses Joyce and Kitty (Judith Braun & Cindy Garner) hand out donuts. They seem to enjoy watching male egos preen and posture. 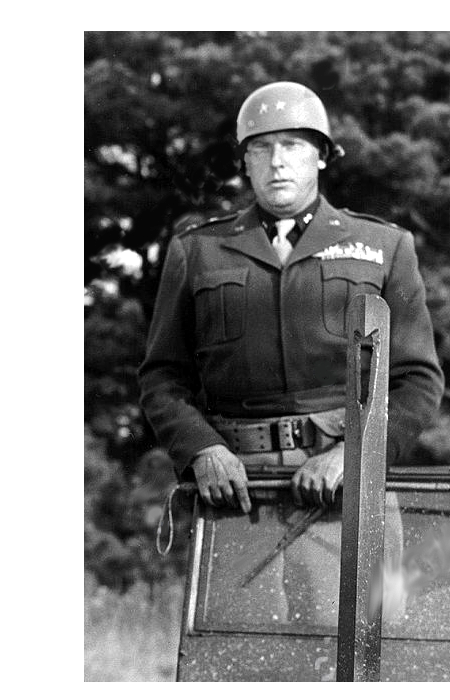 In that curious prologue, Red Ball cuts from stock footage to a scene with a general urging a tank commander (Gregg Palmer) to get on the move. We immediately recognize the general as George S. Patton, ( → ) The uniform is the same, his cavalry riding crop is the same, and he even glares at a cartoon that shows a Patton-like figure intimidating some troops. Someone even uses the words ‘blood and guts.’ But the General on view (Howard Petrie) is identified as ‘Major General Lee Gordon.’ Were some lines re-dubbed to make a name switch?  Did the Patton family object?

Boetticher manages the klunky dialogue well enough, and the tiff between Chandler and Alex Nicol doesn’t come to much — we know that all petty differences will be resolved in a happy ending.  The unit runs into German resistance a couple of times, encounters that the director enlivens with decent bursts of action. I should think that a more inspiring movie could be made from the real pressures of The Red Ball Express, with the truck drivers worked to extremes because the supplies are needed so badly. Isolated incidents are credible. A driver falls asleep and runs off the road, and an unexpected bomb crater requires that the trucks detour through a minefield.

For an action climax Campbell and Co. say Truck You to Adolf and haul their loads of gasoline pell-mell through a burning town. The object is to fuel a company of bone-dry tanks facing annihilation by Fritz and Günther. Universal’s optical department add spectacle with some nice matte work and double-exposed flames. But watch for the shot where the live-action plate pans one way and the superimposed flames pan another, revealing the trick work. 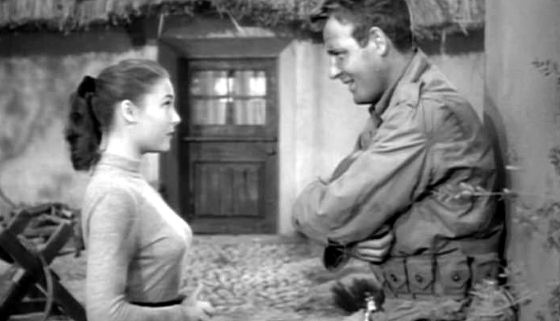 To ‘get some romance into the picture’ the screenplay confects to have the wise-acre private played by Charles Drake make nice with a beautiful mam’selle and befriend her hungry family. After a bicycle courtship and some ‘Me Tarzan You Antoinette’ talk, the demure farm girl decides that Pvt. Partridge is the Yank for her. All of this might work except that the costumers (or some over-eager boy’s club filmmakers) decided to give this simple country girl an attention-getting figure under a tight sweater. Actresses often put up with (or encouraged, what do I know?) being enhanced in this way. Wasn’t there a joke of this kind in the comedy Top Secret, when Val Kilmer meets a sexy resistance fighter?  ‘I dreamed I seduced an American liberator in my Maidenform bra.’

At one point the truckers duke it out with some tank crews until General Patton Major Gordon comes along and delivers a blood-and-guts pep talk, that they all have to work together. Earlier on, Sidney Poitier’s black trooper beats the white Hugh O’Brien in a slugfest… something that might be a precedent in a Hollywood film.

That detail is a good place to discuss how Red Ball falls short of historical accuracy. Although the Army in WW2 was basically segregated, the supply and transport units that formed Red Ball were allowed to be mixed-race. Black troops comprised a majority of the personnel moving the goods, unloading ships and driving the roads. In Red Ball only three black actors have speaking roles, which in the back of a 6×6 truck looks like full integration. But their scenes are few and brief, giving the overall impression that the Red Ball Express mission was a mostly white. 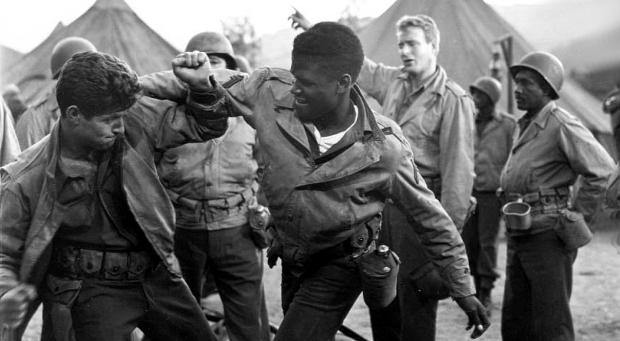 Sidney Poitier has almost nothing to do but resent Pvt. Wilson and Lt. Campbell, ask to be transferred, and then change his mind after ‘team spirit’ is established. On a page called Worst to Best Sidney Poitier Movies, this show comes in #44 out of 51. 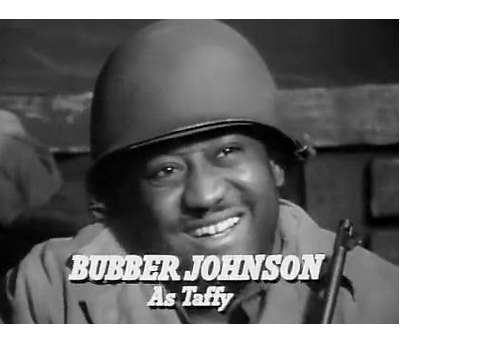 ← Poitier’s good-natured pal Taffy leads the unloading squads in singing songs that real all-black Red Ball work crews might have used. I kind of hope they didn’t, considering that it makes them seem like laborers from Hallelujah or Show Boat. The third featured black player is the sweet-faced Davis Roberts. Remember the War Movie Law that warns soldiers not to talk about their farms back home or their postwar plans? Without high billing, being a nice black guy in a war movie is not a good idea either.

Red Ball Express has no visible racist agenda, and for its year its depiction of black troops is progressive. Don’t think that modern movies are by definition more enlightened. This show is certainly preferable to the egregiously false George Lucas film Red Tails from 2012. One can’t correct the racist past with a hyped fantasy idealizing the experience of black fighter pilots. America’s back-home treatment of the Tuskegee Airmen can be seen in the courageous political movie Strange Victory.  Studs Terkel’s excellent book of collected memoirs The Good War has a couple of chapters chronicling the appalling, sometimes murderous treatment of ordinary enlisted blacks, even in training camps.

The wartime short subject Rolling to the Rhine is about the Red Ball Express, but the men shown loading and driving are white. When we finally see some black soldiers at about 6:50, they are eating chow.

But, back to the trucks already. The moderately entertaining war picture Red Ball Express can at least be called unusual. Even with its budget shortcuts it wasn’t filmed on the Universal back lot or in Griffith Park. This France has no hedgerows but it does have real green trees, lots of them. It’s certainly worth a peek for War movie devotees.

The KL Studio Classics Blu-ray of The Red Ball Express looks great. The company has taken no quality short cuts in its quest to release practically every ’50s Universal-International feature. Can Curucu, Beast of the Amazon be far away?  If you recognize a title you once saw on TV it’s going to look its very best in a Kino HD Blu-ray. The clean and sharp image lets us immediately know when stock footage has been cut in, and it’s easy to see when a clever special visual effect has been employed.

Kino’s go-to military movie experts Steve Mitchell and Steven Jay Rubin handle a relaxed and conversational commentary, recounting the careers of the players and adding personal opinions about what we’re seeing. Neither would call Red Ball a standout production but they find good things to say about it. Residual goodwill from other shows by Budd Boetticher and Jeff Chandler help optimize their discussion.

The title card on the film itself drops the The for just plain Red Ball Express but since it’s called that almost nowhere else, for this one I’ve refrained from fussy hairsplitting. We wait seven minutes to see that main title card, and the rest of the credits are held until the end of the film… that’s unusual too. Perhaps the studio execs thought the opening was too slow with a title sequence up front?