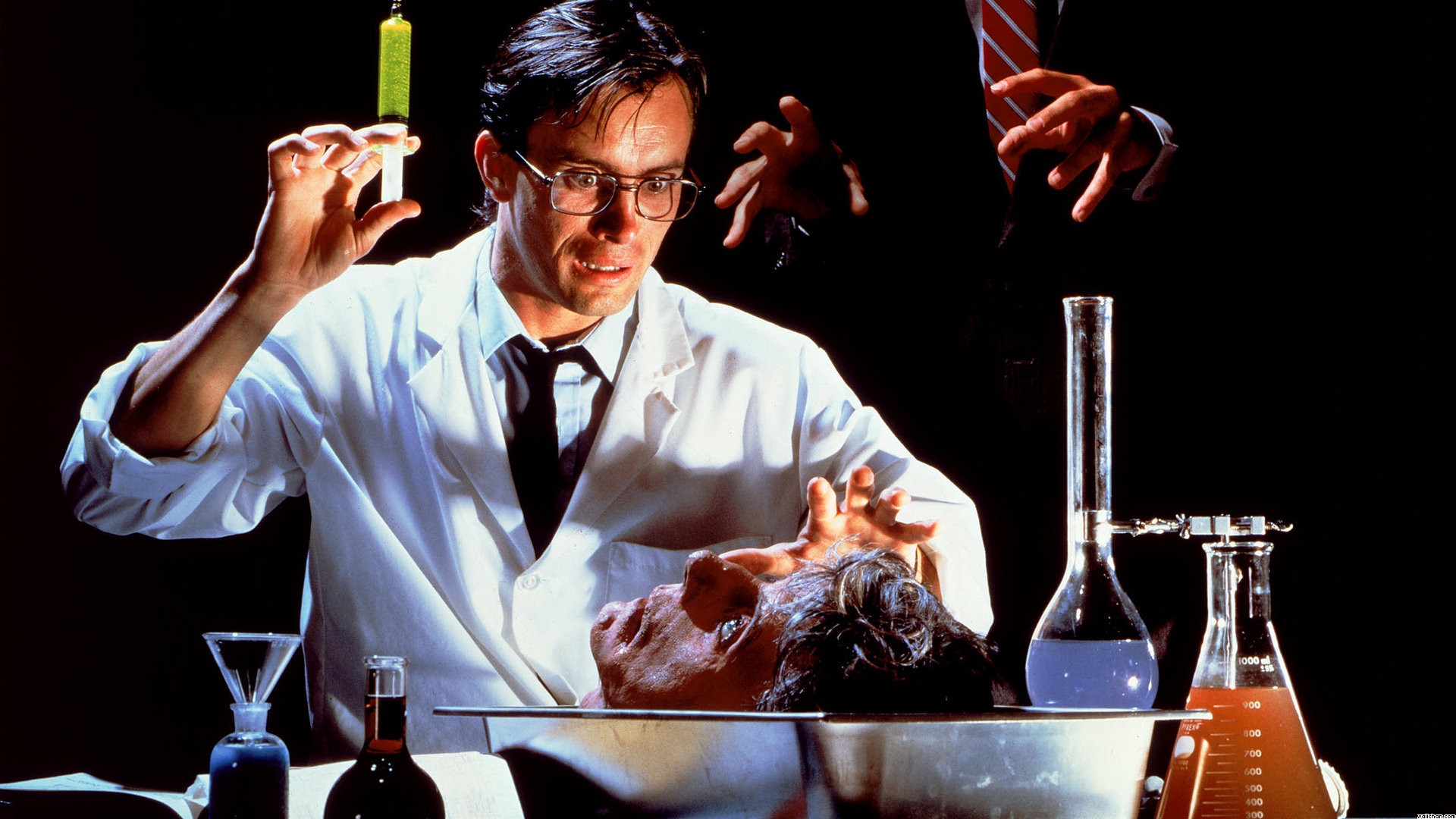 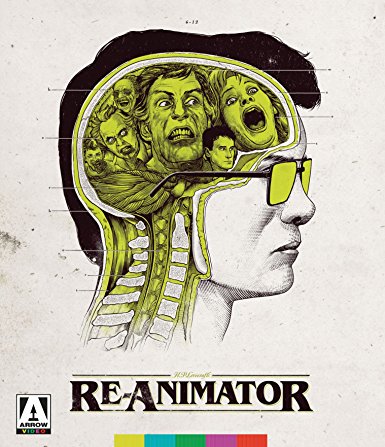 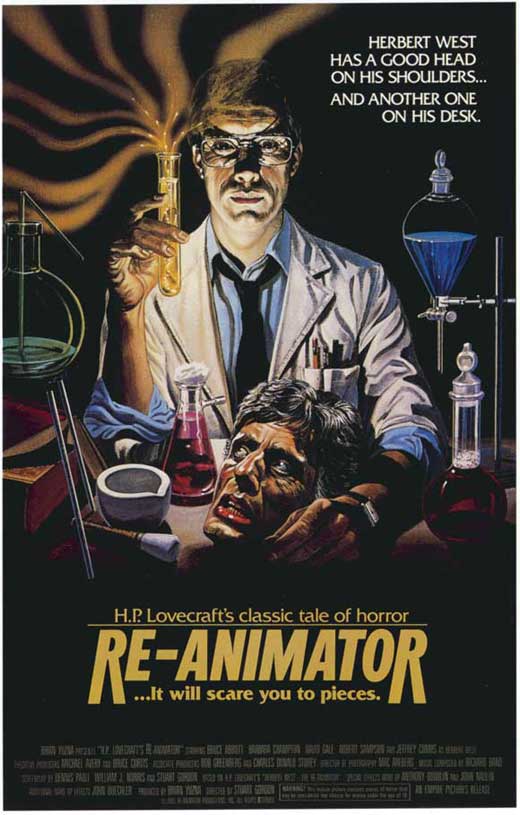 Released in 1985, Stuart Gordon’s Re-Animator remains the grandest of Grand Guignols, a viscerally entertaining comedy that is just grindhouse enough for fans of Blood Feast and arthouse enough for connoisseurs of Francis Bacon’s more grisly canvases.

Originally scripted for Chicago’s Organic Theater Company by Gordon and co-writers Dennis Paoli and William Norris, Re-Animator was based on H. P. Lovecraft’s short story, Herbert West – Re-Animator, first published in 1922. Set in the blandly generic college town of Arkham, Massachusetts, the action revolves in and around the classrooms of stately Miskatonic University’s medical school and the sterilized atmosphere of the academy’s dank morgue evoked so well by Mac Ahlberg’s lush cinematography. 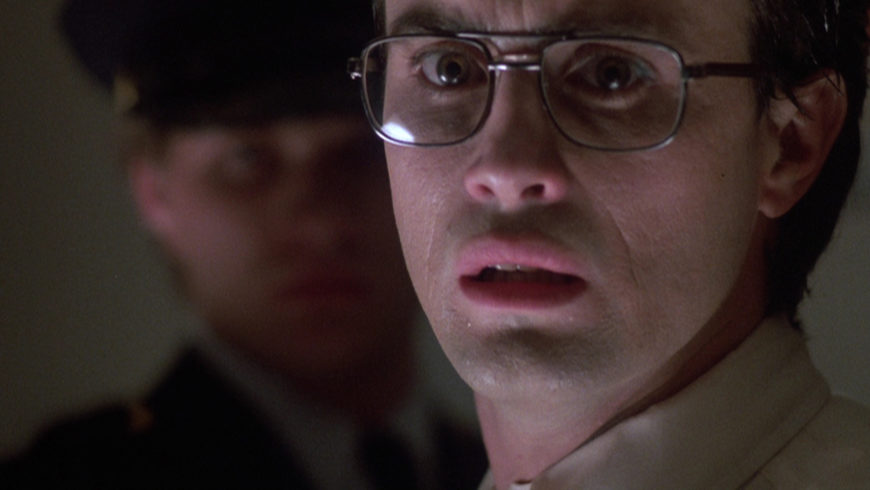 Miskatonic has recently received a new student from Zurich, the sharp-tongued Herbert West, a scientific wiz with a fanatical interest in the afterlife of the recently deceased. West makes himself at home in the basement of a struggling med student, Dan Cain, and almost immediately butts heads with the school’s premiere academic, Dr. Carl Hill, a similarly obsessed professor whose research runs parallel to the young upstart’s. The long-faced but arduous Hill is equally obsessed with Dan’s girlfriend Megan, the voluptuous daughter of Dr. Halsey, the university’s decorous dean. 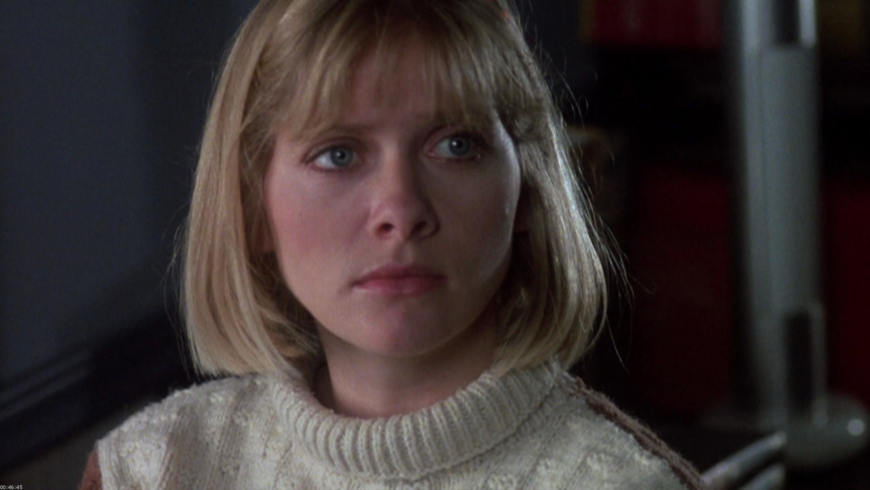 West’s scientific arrogance is tied to his extraordinary formula for reviving the dead, a neon green substance capable of reanimating lifeless tissue. West’s first experiment involves a household cat that results in one very woke tabby and the feline’s vigorous though short-lived return to life moves the young zealot to visit the school morgue for a human subject.

He goes straight to work on a burly corpse with the build of a linebacker and a face like a plate of week-old Lasagna who reacts to West’s serum with psychotic fury. The too-curious Dean Halsey gets caught in the cross-fire inspiring Herbert to pump the scholar’s bloodied body full of the green juice, transforming the once bookish Halsey into a gibbering maniac that can only be controlled by a strait-jacket. 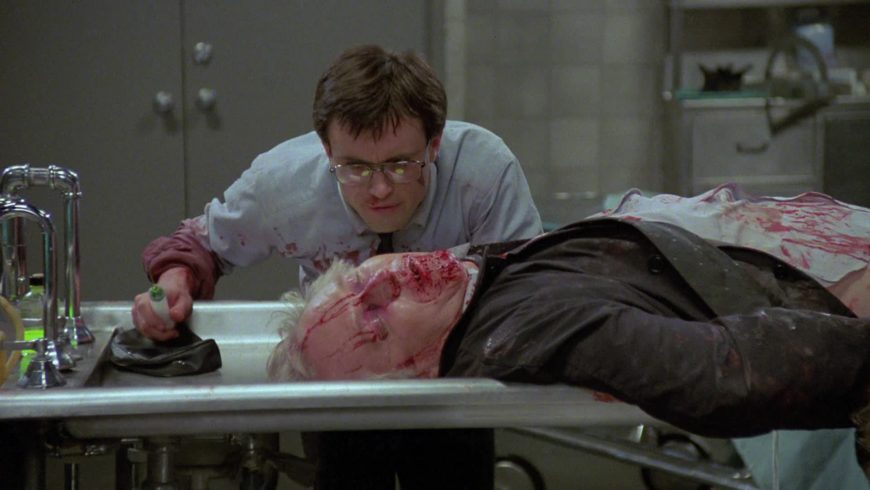 The conniving Dr. Hill realizes that his young adversary is responsible for the newly zombified dean and demands the contents of the formula in return for his silence. But the equally sneaky West has other plans. With the help of a handy shovel, Herbert separates the surprised doctor’s head from his body and promptly doses both the detached head and the headless body with his re-animating fluid. Things, as they say, escalate quickly.

A flesh and blood spectacle that draws inspiration from both Mad Magazine and The American Journal of Medicine, the frenzied finale of Re-Animator features a full-scale assault by a reanimated intestine that compares favorably to the monstrous squid invasion in 20,000 Leagues Under the Sea. Generally a sequence this out-to-lunch has to be fully grounded for the comedy to sustain itself and thanks to the film’s stellar performances, particularly the fiercely funny Jeffrey Combs as West and the splendid Barbara Crampton as Megan, Re-Animator maintains its high-wire act till its gloriously perfect and oddly tragic conclusion. 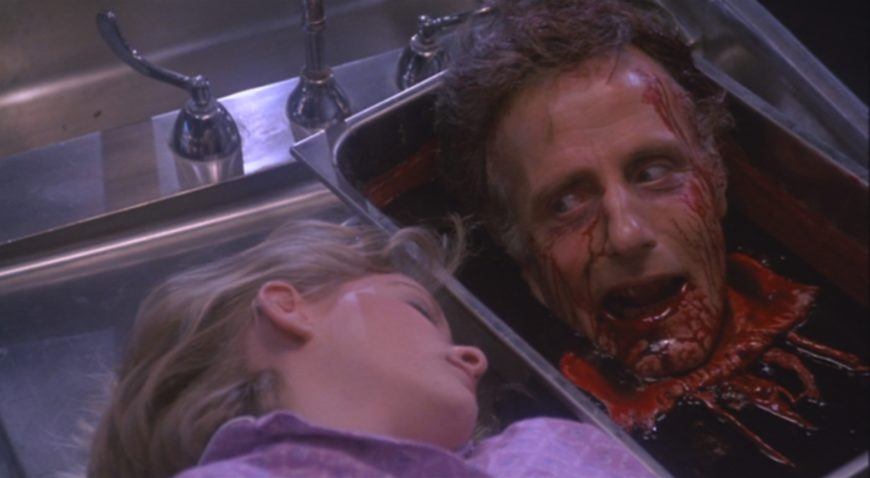 This was Stuart Gordon’s first film and it’s clear that his experience with the actors at the Organic Theater is what gives Re-Animator its singular mix of gravitas and silliness. Combs’ satirical yet respectful take on Colin Clive’s barely suppressed hysteria and Crampton’s sophisticated but sexy update of the helpless ingenue of Universal monster movies assures Re-Animator of its place in the pantheon of horror satires including Bride of Frankenstein and The Howling.

Re-Animator is a film that is really meant to be seen with a crowd. My first experience was in the mid-eighties at the late, great Vogue theater in Louisville. The tension in the crowd was palpable, unsure how to react to this unpredictable mix of gross-out gore and dead-pan slapstick. It wasn’t until Herbert used a sharply pointed paper holder to secure the wobbly noggin of Dr. Hill that the crowd erupted in unison, realizing at the same moment, “It’s ok to laugh”. They were on Gordon and company’s wavelength till the party ended and streamed out the theater like happy school kids. 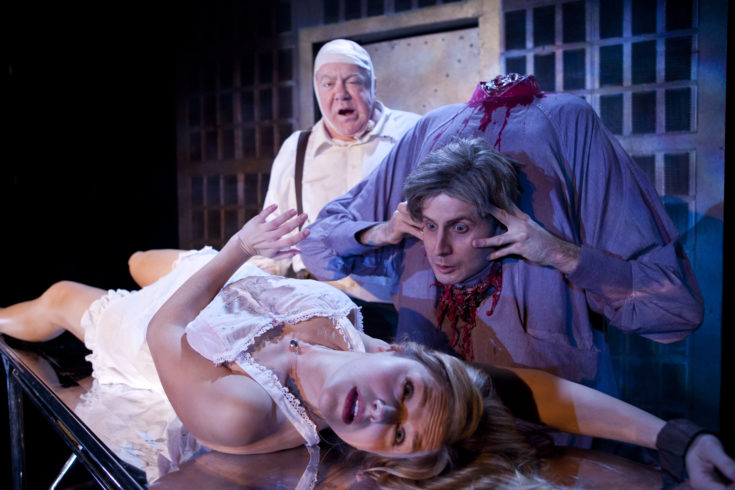 True to its nature, Re-Animator just won’t die, having recently found new life as an award-winning stage play, Re-Animator: The Musical, produced and directed by Gordon and co-written by Gordon with William J. Norris and Dennis Paoli. Ticket holders who found themselves in the front rows were cautioned to cover themselves in plastic or come dressed in their most stylish hazmat suit… yes, it’s that kind of show.

Re-Animator‘s cinematographer Mac Ahlberg had his own fascinating career, beginning as a director in Denmark with the quintessential 60’s soft-core soap opera, I, A Woman, before concentrating on photography with John Landis’ Innocent Blood and Joe Dante’s The Second Civil War. His work on Re-Animator is given new life with a lustrous new 4K transfer from Arrow Films.

Arrow’s new blu ray edition, with its exhaustive array of documentaries and interviews, is surely the most comprehensive and elaborately appointed version of Gordon’s film yet. The box, decorated by illustrations from Justin Erickson, houses two discs containing the unrated version and the “integral” version with extra scenes shot to flesh out a censored version released in some quarters (pro tip, stick with the “unrated” release). 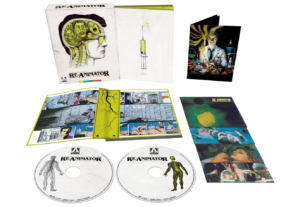 Deleted and Extended Scenes and a Trailer & TV Spots. 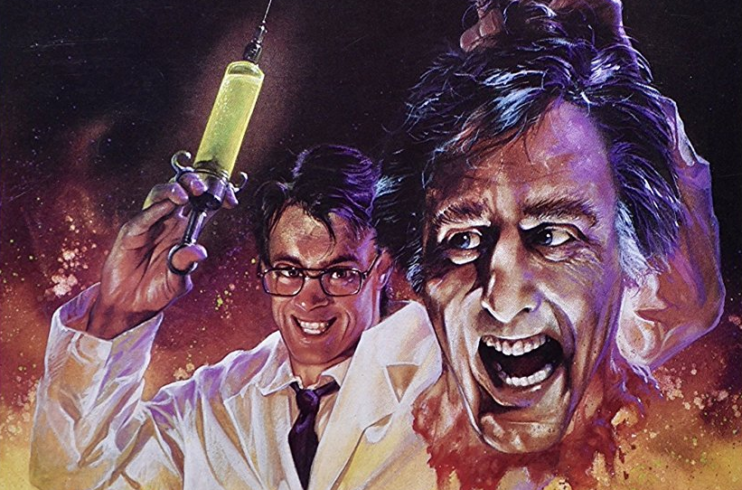 A new hour long documentary hosted by Lovecraft expert Chris Lackey on the writer’s work in films, A Guide to Lovecraftian Cinema.

Rounding out the package is a booklet featuring an essay by writer Michael Gingold and a nifty miniaturized reproduction of the original 1991 comic book adaptation of Re-Animator written by Steven Philip Jones and illustrated by Dave Dorman (cover) and Chris Jones (interior art) reprinted in its entirety. Wait! There’s more! A collector’s set of Re-Animator postcards!