Release the Kraken! They’re only now releasing this Blu-ray in the U.S.. The patron saint of every special effect fan gets the royal treatment in this career overview capped with industry testimonials and rare film items from a cache of 35mm outtakes found packed away in RH’s storeroom. 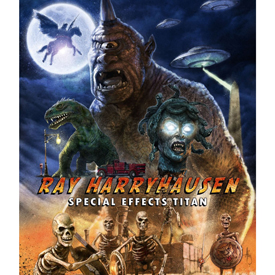 The time has long passed that Ray Harryhausen was merely a cult figure. By the release of Golden Voyage of Sinbad the ‘kids’ had discovered him too. One of the few special effects artisans who was also a star, Harryhausen’s claim to lasting fame has been established and reinforced. He’s been the subject of scores of interviews, and his career was covered quite well in a 1998 long-form docu written by Richard Schickel. So why another one?

Ray Harryhausen: Special Effects Titan traces the career path of RH once more, but this time with comments by the next generation of industry directors and digital effects people, some of the notables that have made CGI into THE driving force in movies. Peter Jackson, Guillermo Del Toro, Henry Selick and others are actually two generations removed from Harryhausen; the actual immediate heirs of the ‘lost art’ of stop-motion are represented by Randall William (Randy) Cook and Phil Tippet, who worked with Ray’s earlier acolytes David Allen and Jim Danforth. So did effects cinematographer turned effects kingpin Dennis Muren.

The show is a sincere and sentimental tribute with some special content, but it mostly covers ground covered many times before. The master animator is on hand in an archived interview, saying the same quotes and sound bites — anecdotes such as the old story that the studio resisted The 7th Voyage of Sinbad because of the failure of a ‘girlie show’ Sinbad movie that Howard Hughes had made a couple of years before. Did you know that the Harryhausen octopus only had six legs?  Uh, yes I did. The varied interviewees present plenty of good material but also take too much time to simply praise their mentor and friend. The effects experts were inspired by Sinbad the same way Harryhausen was inspired by King Kong, et cetera. Interviewees John Landis, Joe Dante and Peter Jackson come off well because they’re accustomed to putting their thoughts into succinct (and in Landis’ case, funny) sound bites. But the editorial pattern on view comes from the world of disc featurettes, which wants the screen refreshed every few seconds. Only a few statements are allowed to express a full idea, so the discussion tends to skate across subjects without developing any of them.

Fantasy fans often debate the differences between old-school analog effects and CGI work, usually lauding the artistry and achievement of Harryhausen’s one-man-band approach to the detriment of the obviously quite accomplished miracles of computer assisted movie magic. The most meaningful thing Harryhausen has to say is that he was a filmmaker, not just an animator. He shaped the stories and chose the camera angles and is as much an auteur as any director. But the statements go ’round in a circle, with the next-generation wonder boys praising Ray’s pioneering genius to high heaven. They show how their own work contains homages to the King: Doctor Octopus’s mechanical tentacles move just like the Argonaut Hydra heads, etc..

The show has okay artwork and employs aggressive graphic design for transitions, speaker ID flags, etc. It was apparently partly produced by the Harryhausen Foundation, which seeks to keep the artist’s legacy and artifacts intact. Tony Dalton and Ray’s daughter Vanessa are two principals behind this laudable effort; Dalton is an excellent biographer of Harryhausen. Newbies to the RH fold will be entertained by the show’s constant film clips, whereas veteran fans might be disappointed to see the shallow film discussion backed up by the same old trailer excerpts. It’s not the fault of this docu that at least five major books have covered every photo and factoid about RH so thoroughly. As a straight docu, the old Schickel piece has a better career overview. 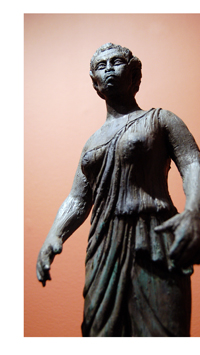 Naturally nobody we hear is critical of the dramatic or directorial shortcomings of some of Ray’s films, which is fair enough. Even one spokesman’s assertion that ‘even if the acting is bad, we’re here for the monsters’ seems too defensive. I long ago stopped feeling the need to diss James Franciscus or Patrick Wayne, or some of the lame live-action directors hired by Charles Schneer.

What is new? We have some home movies from the set of 7th Voyage that show how the Spanish beach was cluttered with crew relatives and girlfriends and turistas glomming the action on Nathan Juran’s set. The film is of course Standard 8mm, not Super-8 as stated in a text title. There are also other scattered pieces of newly collected film bits. The big news when this show was announced is that it would premiere the treasure trove of film recovered from Harryhausen’s garage storage. We see a few photos of Jim Danforth, Randy Cook and Vanessa Harryhausen digging through the goodies. Cook found reels of 35mm tests and unused footage from Harryhausen’s B&W independent days — essentially The Beast from 20,000 Fathoms through 20 Million Miles to Earth. He took them to New Zealand, where Peter Jackson transferred it all. The problem is that Special Effects Titan uses at most only a minute of this amazing stuff. We see slates and animation ‘stage waits’ that show how the Dynamation setup works. The best items are full, uncut shots of the Rhedosaurus (Ray Harryhausen-edosaurus?) stalking forward and standing point blank in front of the camera, his stomach breathing in a way I hadn’t noticed in the feature.

Maybe I got too excited, but I expected to see more of this material produced as an extra. None of it appears in the extensive extras section, which offers the kinds of items that crop up in special interest docus — deleted docu scenes in rough-cut form. Twelve interview outtakes allow the guest interviewees to put together thoughts that take more than fifteen seconds to express. Other interviews give us people that don’t appear in the docu (or at least I didn’t see them): Edgar Wright, Simon Pegg, Peter Lord, Rick Baker.

Director Gilles Penso and producer Alexandre Poncet are heard on an audio commentary hosted by Tony Dalton. Celebratory events for Harryhausen are covered in two more video pieces, along with a sentimental ‘Message to Ray’ and bits of gag videos assembled to surprise Ray on his birthday. A gallery of trailers rounds out the package.

Arrow Video’s Region B Blu-ray of Ray Harryhausen: Special Effects Titan is a good-looking entertainment docu decorated with busy graphics. The video for Harryhausen’s main interview is a little weak but all of the newer interviews look great. The film clips are also in fine shape. The audio is good, although Bernard Herrmann fans may be distracted hearing cues from 7th Voyage spread over other titles. No major foul there.

Long ago at UCLA, I remember staying up late one night so Randall William Cook and I could watch The Valley of Gwangi for a third time, before the rented 16mm print had to be returned. In prep for this review, I asked Randy for his thoughts on the rare footage he recovered from the Harryhausen home. Did Randy learn anything new from the evidence of Ray’s dailies and other outtakes? I hope someday to view the full reels of recovered film, and to hear what he has to say about them.

Randy: “I don’t think I learned anything about how Ray worked from the new pictures.

When we cleaned out the garage and found all those treasures, I was surprised to find six frames of the Colossa live action process-plate footage from The 7th Voyage of Sinbad, and was floored to learn that the live action cave element was a clever bit of set construction and not an actual cave opening. Ray would add a miniature cave arch with sculpted nose and eyes, to make the cave into a ‘mouth’ with a spooky, primitive face. So, kudos to the art department. My biggest Garage Treat was holding a tiny Sinbad puppet, also from 7th Voyage. In the garage we also found Ray’s B&W dailies reels. All his ‘fifties films were represented, and I believe Ray actually developed this precious footage himself. And it was a huge thrill to assist in the transfer of this footage with Peter Jackson down in New Zealand. I was duly impressed to find that a large percentage of shots from those dailies were slated as “Take 1.”

Ray Harryhausen: Special Effects Titan has been long awaited here in Region A. U.S. Harryhausen fans will find that it contains some very special content, especially some beautiful character tests and outtakes from The Beast from 20, 000 Fathoms. Most effects experts have remained at best marginal figures in film history, but Ray has achieved superstar status beyond industry boundaries. As Randy Cook once told me, “Ray had the best ride of all — an uncompromised career, and at the finish he got to take victory laps.”