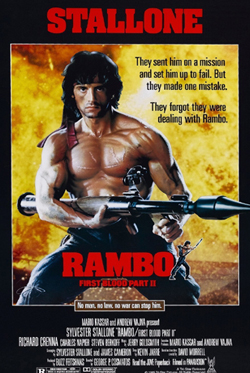 Any subtleties or ambiguous notions found in 1982’s First Blood are blown up real good in this 1985 sequel. Co-written by Stallone and James Cameron, the second film picks up right where the first left off as Rambo is released from prison in order to rescue a squadron of POWs in Vietnam. Directed by George Cosmatos, the explosion-happy picture benefits from stellar tech credits with TFH Guru Mark Goldblatt in the editing bay, an evocative score by Jerry Goldsmith and cinematography from the brilliant Jack Cardiff.