David Cronenberg puts Canada on the horror map with yet another early career ick-fest, about a vampiric woman armed with a new mutant organ. Marilyn Chambers is the dangerous female who spreads a plague of bloody murder. Fun for the whole family. 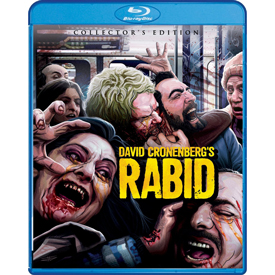 Now available in Region A, David Cronenberg’s Rabid is slightly different than the Blu-ray released in the UK last year by Arrow. It’s touted as a new transfer. Some of the previous extras have been retained and others dropped, and two new items have been added. A motorcycle accident outside the Keloid Plastic Surgery Clinic puts young Rose (Marilyn Chambers) under the knife of plastic surgeon Dan Keloid (Howard Ryshpan), who uses his new experimental technique to save her life. Unfortunately, her ‘morphogenetically neutral’ tissues regenerate in an unforeseen manner. Rose recovers transformed into a strange, vampire-like creature. An unheard-of organ/appendage emerges from a new orifice under her left armpit, a fleshy syringe through which she engorges on human blood. Rose can’t eat anything else. She can kill her victims, but the ones she leaves alive become frothing maniacs impervious to pain and desperate to bite others, like rabid dogs. Rose uses her sexual allure to attack victims wherever she finds them. The plague of rabid killers grows so rapidly that the authorities invoke martial law and shoot the infected on sight. As Rose has made Dr. Keloid one of her first victims, nobody realizes that she is the ‘Typhoid Mary’, the source of the contagion. Rose learns the hard way about her new affliction, which enforces a biologically mandated lifestyle change. Excellent makeup effects bring her new weapon-organ to life, and Cronenberg doesn’t make it pretty. It resembles a penis with a retractable stiletto, and it emerges from an opening that looks like a ragged anus. Our views of this event amounts to all of three or four seconds scattered throughout Rabid. We learn how it function even as Rose does. She can strike during a friendly hug, armpit to armpit. Or the lance can nail a victim wherever — even in the eye. The cultural ironies stack up when Rose enters a porn theater (which for all we know could be showing a Chambers film), pretends to enjoy the film and picks up an eager patron. How can she attack him in such a semi-public place? Every graduate of make-out sessions at the Bijou will indentify with the solution: the guy reaches into her blouse, which automatically puts his hand adjacent to her armpit…

Critical analysts of horror have no trouble arriving at the game Cronenberg is playing. With her newfangled sex-weapon apparatus Rose is now deadlier than the male, possessing a penis that puts her in a League of Her Own, so to speak. Her next meal is never far away. Both in the big city and out on the highway there is no shortage of men eager to get up close and personal with a bright new acquaintance. It can be interpreted as a switch on gender roles, I suppose, even if the premise adds up to a novel way to create a sex vampire. As Rabid is pre- AIDS, there’s no direct connection to be made there. The Rose-Monster is also not a conservative apparatus to destroy sexual sinners. Many of her victims are not sexual conquests. When her hunger calls, she’ll attack friends and maybe even her lover.

Rabid is a perfectly legit horror effort with a fundamentally Cronenbergian concept, but it isn’t as exciting or as dynamic as his other films. No overarching conspiracy or fantastic obsession is involved, as with the mad scientists that profess nefarious ideologies behind their unsavory customized organs, externalized ‘psychoplasmic’ entities, or schemes to dominate the world with telepathic assassins. Dr. Keloid’s stated aim is only to be a better surgeon, and to launch Keloid Clinic franchises that will make his business partner Murray Cypher (the excellent Joe Silver, repeating from Shivers) into the Colonel Sanders of Plastic Surgery.

Dr. Keloid is just a nice guy who has a formula that allows transplanted tissue to regenerate itself in new forms; he didn’t know that Rose’s body would invent entirely new physical functions for itself. We’ve weathered maybe 3,000 horror films about breakouts of zombie-ism, but Cronenberg’s repeat of the insidious spread of a new biological curse is Rabid’s least interesting angle. It dead-ends in the familiar “Walking Sickness” situation from the classic Things to Come: military gunmen and snipers shoot all of the mad-dog, ‘rabid’ victims on sight. 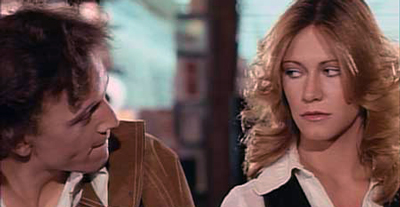 It’s odd that Cronenberg does not pursue the concept to the next step – we expect him to at some point ‘identify with’ Rose’s disease, which is the film’s real leading character. The parasitic virus kills people, and Rose is its Queen Bee. Since the only possible outcome is the destruction of humanity, what’s in it for the virus when we’re all dead? Rabid has no spokesman for the plague’s POV in all this. Rose certainly can’t see beyond her new role as victim-monster.

Rose’s strange transformation has no ‘upside’ typical of Cronenberg, no new expanded-consciousness or embrace of a new kind of existence. She remains a random victim, a standard tragic monster, like The Wolf Man. The film has no real villains. Dr. Keloid comes to the rescue when he could just have sent for a public ambulance, and he and his partner Murray Cypher mean no harm. Cronenberg invents no jerks, creeps or teens that ‘deserve’ to die because they’re sexually active. Rose’s boyfriend Hart (Frank Moore) really cares, and is willing to work with her to overcome her affliction. But Cronenberg puts his emphasis on straight storytelling, showing us the ways that Rose prowls the night for victims. Events move so quickly that nobody gets a handle on the threat until it’s way too late. When Rose finally realizes exactly what she is, there’s nothing she can do about it either. She doesn’t want to harm Hart or their good friend Mindy (Susan Roman), but her new biological hunger dominates her actions. She’s a sexual animal. Out of budget necessity, Shivers had limited its scope to one high-rise apartment building. Rabid shows the director deftly handling a larger cast. The many supporting bits in the film are all excellent. The action is also staged on a larger scale. Perhaps a specialist came up with the film’s startlingly realistic car crash, but its messy quality is a perfect fit for the chaos-loving director: a speeding sedan hits another car, falls off a freeway overpass right into the path of a semi-truck. That kind of action is unusual for mid-’70s horror fare. We have to assume that Reitman and Cronenberg’s aim was to compete with the majors on their own turf. Yet Cronenberg makes everything personal. His show begins with a motorcycle ride in the country, like Lean’s Lawrence of Arabia. It ends like Luis Buñuel’s Los olvidados, on a trash heap.

Rabid remains a highly entertaining horror show that hasn’t lost an iota of shock value. It certainly lined up the fans — and investors — to allow the director to continue his personal exploration of queasy, outrageous biological delights.

Scream Factory’s Blu-ray of Rabid differs from the U.K. Blu disc released last year; Shout!’s specs sheet announces a new 1:66 transfer approved by the director. As with the other early Cronenberg pictures, these new scans reveal them to be handsomely filmed — those grainy, weak telecine copies from long ago are now only memories. The same archival interviews are present. Cronenberg addresses the flap caused when news columnists slammed the Canadian Film Development Corporation for funding pictures like Shivers and Rabid. The interview with producer-director Ivan Reitman gets deeper into the opportunity of working for Cinépix, saying that he backed away from having anything to do with the company’s soft-core Dianne Thorne / “Ilsa” Nazisploitation movies. But he saw Marilyn Chambers on a nude TV interview show, and thought, ‘why not?’ He found her a charming and gracious person, and a cooperative actress during the shoot. Co-producer Don Carmody talks more about Cinépix and the CFDC funding deal.