Curtis Harrington took an assignment nobody else would and fashioned a gem of low-budget Sci-Fi. A Russian space epic provides expensive-looking special effects scenes for a new horror show about a deadly alien rescued from a crash landing on Mars. The extras include excellent interviews with Roger Corman and effects specialist / historian Robert Skotak. 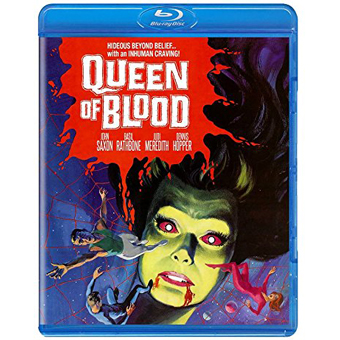 A.I.P. released some tacky movies in its day but none were less respected than those cobbled together from foreign imports spiked with new filmed-in-Hollywood storylines. The one that holds up best is Curtis Harrington’s creative and well-judged Queen of Blood, a micro-budgeted production that comes out looking very good on Kino Lorber’s new Blu-ray. And for once the special extras are indeed special.

The otherwise disparate filmmakers Curtis Harrington, Francis Ford Coppola and Peter Bogdanovich all took charge of adaptations of Soviet science fiction films for A.I.P. and Filmgroup, transforming them into propaganda-free entertainment for American kiddie matinees. Always interested in Sci-fi, producer Roger Corman bought the U.S. rights for a Goskino movie by Mikhail Karzhukov, Nebo zoyvot, which with some added monsters and disguised Russian insignia became Battle Beyond the Sun. Bogdanovich would later shoot scenes with Mamie Van Doren as a telepathic Venusian ‘space nymph’ to add a bit of cheesecake to a sex-challenged ‘Leningrad Popular Science Film Studio’ epic called Planeta bur. The result is a fairly forgettable turnip called Voyage to the Planet of Prehistoric Women. But the most elaborate retrofit of a Russian space epic for American screens occurred with Queen of Blood. Experimental director Curtis Harrington and his producer George Edwards didn’t just augment Karzhukov’s Mechte navstrechu, they filmed an entire new story to sandwich between the original’s spectacular special effects scenes. The original Mechte navstrechu was a flat 1:33 ratio production, so some compositions are compromised by the cropping to 1:85. 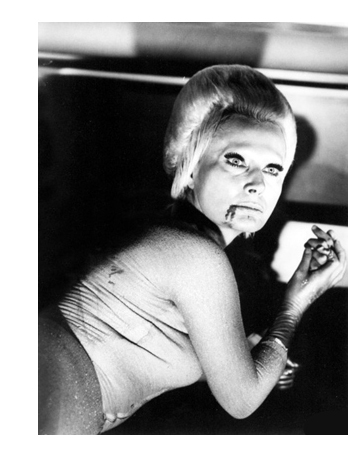 I’ve seen the original 1963 Mechte navstrechu, a title that translates roughly as A Dream Come True. Unlike earlier Soviet space films that concentrate on Cold War conflicts, Karzhukov’s show is about a deep space civilization that sends emissaries to Earth. Their spaceship looks like a globe girdled by an Arab crown. When it crashes on Mars, Earth’s united space scientists send one ship, and then a second, to rescue the survivors.

Harrington re-imagines Mechte navstrechu for some very fast filming on just a few sets with name actors John Saxon and Basil Rathbone. The visionary/futurist original theme is gone, and in its place is a commercial Sci-fi-horror hybrid. The new footage is cleverly designed to match expensive special effects scenes from the Soviet original. An unbilled Roger Corman served as a silent partner producer, and in many ways the movie is a color successor to his Sci-fi efforts of the late 1950s — the main title sequence uses similar abstract artwork. The most expensive item in the budget is said to have been the manufacture of a couple of space helmets to match the props seen in the Russian footage. Harrington must be careful with his angles when a scene requires three helmets to be in use at the same time. By replacing the helmet’s light-colored crown with a dark alternate, the two props are made to represent four or five separate items.

Harrington’s matching is remarkable. Both movies begin with groups of eager-beaver space cadets lunching at an interesting modern building that fits in well with the original film. Space establishment chief Doctor Farraday (Basil Rathbone) delivers a speech from the foot of a colossal (and very Soviet- styled) statue. Farraday announces that contact has been made with an advanced star-faring civilization that will be sending voyagers to Earth. 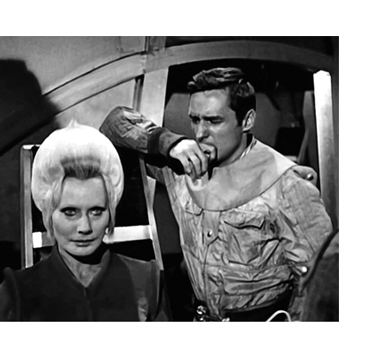 The original Russian footage provides odd visuals of life on the distant planet, represented by strangely designed machinery and space hardware. The Soviet rocketry effects fit in nicely with Harrington’s re-shoots, even with the 1:85 matting. The center section of the film shows the first rocket getting stuck on Mars. The daring Brenner lands a smaller rocket on one of the Martian moons and then continues to the Martian surface in a smaller shuttle. Again, the matching is just good enough to give the impression that the show is an organic whole. Although nowhere near the visual masterpiece of Mario Bava’s ‘space gothic’ Planet of the Vampires, Queen of Blood is filmed with taste and style.

The show hits its stride when the spacemen rescue an unconscious female alien survivor who neither talks nor eats. She has green skin and piercing eyes. She wears a strange beehive hairdo and a clinging leotard-like costume. The alien is played by Florence Marly, a Czech beauty who starred in a Sci-fi film from a Karel Capek novel about an ultimate explosive called Krakatit (1948). She’s also excellent as the greedy girlfriend of a Nazi general in René Clément’s superior submarine movie The Damned (1947). Marly was one of many European actresses imported to Hollywood in the late ’40s that didn’t make a big impact. Her Alien Queen with the enormous white hairdo would seem to have been an inspiration for the Martian Assassin played by Lisa Marie in Tim Burton’s Mars Attacks!   Several of Curtis Harrington’s later movies would star ‘mature’ actresses in unusual roles, which puts Florence Marly in the same company as Simone Signoret, Debbie Reynolds, Piper Laurie and Shelley Winters.

Harrington and Ms. Marly take pains to make the Alien Queen into a memorable character. Her mysteriously smiling face is framed in carefully chosen close-ups, using precise lighting to make her eyes appear to glow. She hates Laura but stares hungrily at the men, a gaze that turns out to be telepathic. As the title none-too-subtly hints, she’s really a space vampire. Doctor Farraday instructs the astronauts by radio to keep Marly’s Queen Vampire alive with blood from the medical locker, which is a very bad idea. Who will get back to Earth alive, and how will they stop the Queen of Blood from feasting on Earth’s entire population? Harrington’s show takes itself seriously, unlike American-International’s original trailer. It drips with campy taglines like, “Turns the Milky Way into a Galaxy of Gore!”

Harrington handles his cast well. Veteran Basil Rathbone was reportedly unhappy that a major star such as himself would be forced to work under such reduced circumstances. It looks like Rathbone’s services might have been needed for only a couple of days — Farraday typically enters scenes, makes his mark, and then exits to allow the younger actors to carry on. A non-speaking assistant is played by Forrest J. Ackerman, whose Famous Monsters of Filmland was then at its peak of popularity. Although Forry was a personal friend of Harrington, placing him in the picture is another instance of A.I.P. coordinating its publicity campaigns with Ackerman’s magazine.

Dennis Hopper’s gentle, passive space man becomes the first earthling to be seduced by the mystery woman from beyond the stars. As with his unassertive sailor in Night Tide, Hopper’s character appears to be a Harrington surrogate. It’s difficult to connect this meek ‘Harrington’ Hopper with the anti-establishment rebel the actor would play just a couple of years later in Easy Rider.

Future Star Wars producer Gary Kurtz was Harrington’s production manager, and the spaceship interiors constructed by his reported crew of ‘hippie carpenters’ are attractively designed. Even taking into account a nagging problem with a batch of silvery contact paper, they are far less tacky than was the A.I.P. norm for marginal productions of this kind. The final act on the rescue ship relies on Harrington’s expressive direction and cameraman Vilis Lapenieck’s creative lighting for the close-up character work.

Queen of Blood is easily the best of the A.I.P. import-recuts, and the only one that hangs together as a fully satisfying drama. It was in active second-feature release for several years straight, and I remember it playing on television at the same time that it showed in theaters. Several alternate titles have been assigned to TV versions, but I’ve only come across the one it bears now. 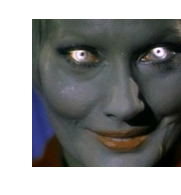 The KL Studio Classics Blu-ray of Queen of Blood is a real beauty. The transfer helps Harrington’s film footage match the original Russian effects scenes. The care taken in the shooting, and those expressive episodes with the menacing Florence Marly, make what might have been a throwaway film into a solid demonstration of the director’s talent. It’s even thematically consistent — how many Harrington movies are about lethal females of one kind or another?

The corny A.I.P. trailer is back again, and Kino has produced two new interviews. Roger Corman is casual and congenial, fact-checking the usual stories about the picture and offering generous praise for the filmmakers. He initially rejected Harrington’s casting of Florence Marly as the alien queen, but soon saw that she’s excellent in the part. Although he’s quick to mention the Gary Kurtz-Star Wars connection, Corman doesn’t claim to have started Kurtz on his film career.

A second interview is even better. Robert Skotak is an accomplished special effects expert, a fabricator of terrific practical solutions to effects problems. He has also studied, investigated and written about vintage science fiction productions for years and knew Harrington well. Skotak tells the story of the making of Queen of Blood from a new angle, helping us to appreciate the difficulties of production on a set ‘full of hippies.’ The story of Harrington and Edwards trying to placate the difficult Basil Rathbone are amusing: when Rathbone showed up to do his two days’ worth of scenes, the sets he was supposed to perform in weren’t yet finished. Robert Skotak is an expert on Soviet Sci-fi films of the Cold War. His commitment to the genre is a good thing and I welcome his presence here. I’ve heard too many commentaries lately by so-called experts that try to ‘make it up as they go along.’

This oddball Sci-fi horror feature succeeds because Curtis Harrington inspired his crew to make something from nearly nothing. Thanks to the committed cast and the otherworldly Florence Marly — she really seems ‘into’ her bloodthirsty role — Queen of Blood is a unique fantasy item. It deserves to have its reputation ratcheted up a few more notches.