The New York Underground invaded the mainstream with Robert Downey Sr.’s completely irreverent Madison Avenue satire, in which a token black executive takes over an Ad agency, renames it ‘Truth and Soul’ and goes on a mad reign of creative terror. Arnold Johnson, Stan Gottlieb, Allen Garfield, and Antonio Fargas star in a farce that some critics found intolerably crude — but an independent distributor gave it a national release. 1969 was the year that the Production Code took a tumble — and Downey’s picture proved that freedom of expression was alive and well in the U.S. of A.. 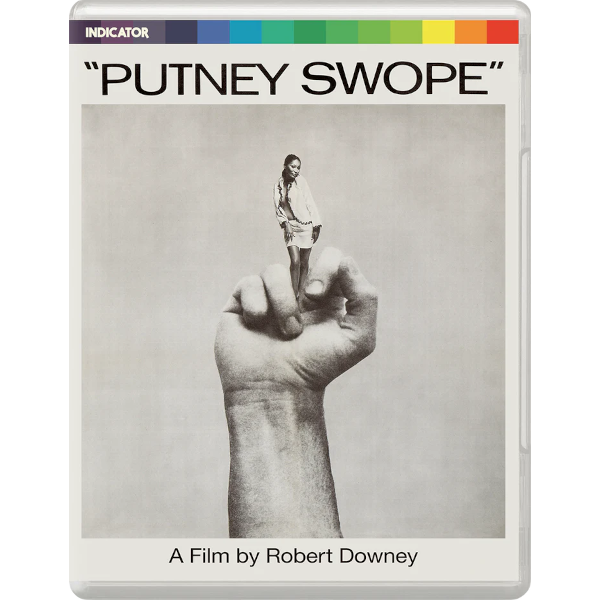 What was it like to encounter ‘radical’ new films in the late 1960s?

Many of us sheltered ’60s teenagers could hardly believe it when the ratings system came in and movies changed. We’d already seen the challenges in dialogue: when Steve McQueen said the word ‘bullshit’ in Bullitt, the entire audience gasped as a single voice. By 1970 everybody was using language for shock effect — often for uproarious comedy. John Schuck barked the F word in a football scrimmage in M*A*S*H, and the laughter exploded.

Exploiting the ‘R’ and ‘X’ rating categories, movies pushed ‘good taste’ boundaries we assumed would be permanent. The first X-rated picture that convinced us that its content was both serious and important, was Schlesinger’s Midnight Cowboy. Just a couple of years later, it was re-rated ‘R.’

The conservative movie houses in San Bernardino, California were by 1969 showing only a slice of what premiered in Los Angeles, 80 miles to the West. Some theaters tried to keep family audiences by booking reissues of Dr. Zhivago and The Sound of Music. We went to Riverside once in a while to attend an arthouse theater, nurtured by the U.C. campus there. But my education in current film soared when I got my driver’s license. As a military dependent I was able to attend the Norton Air Base theater, which showed everything, at only 35 cents a ticket. I was drawn to odd stuff with adult ratings: If . . .,  The Best House in London,  Age of Consent,  The Big Bounce,  Joanna,  Last Summer,  Medium Cool. This general experience is covered in an older DVD Savant article.

The most mind-expanding comedy we saw at Norton was a B&W New York independent from Cinema V called Putney Swope. The audience of lonely airmen — many of them black — went wild over the movie, the same way they did for Shaft and Cotton Comes to Harlem. A wild advertising satire that wasn’t afraid to be 100% vulgar, Swope shocked critics and delighted would-be counterculture hipsters. It was professionally crafted and wholly independent in spirit. More to the point, it was genuinely liberating: by breaking the rules, Robert Downey proved that moviemakers could exercise artistic freedom. 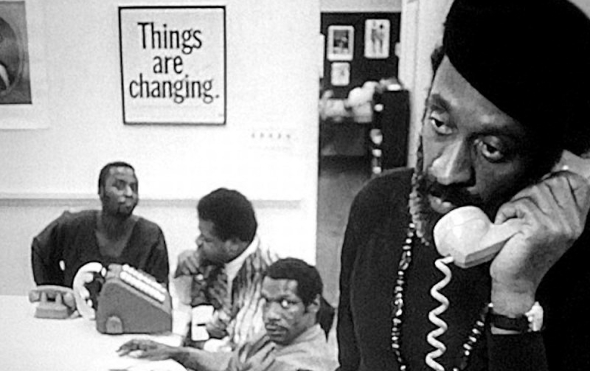 The world of advertising has always been easy comedy material, since the days of Will Success Spoil Rock Hunter? and even earlier, with the advertising-is-vulgar MGM feature The Hucksters. Downey extends the joke with an intriguing premise: what if an anarchic Black Power executive gained control of an ad agency?  1969 was a ripe year for take-no-prisoners satire, and Putney Swope scores high in laughs per screen minute. It doesn’t quite keep its comic invention going for all of its 85 minutes, but when it’s cooking there’s nothing like it.

When the Chairman of a big New York ad agency dies in the middle of a board meeting, the other executives immediately rob the corpse. They then mistakenly elect the ‘token black’ executive Putney Swope (Arnold Johnson) as their new Chairman — everyone votes for him thinking he’ll lose. Swope immediately dissolves the board, fills the staff with militant soul brothers and renames the agency “Truth and Soul.” Many previous clients jump ship, but Swope’s arrogance soon wins the firm a new roster of cowardly, obeisant clients that come begging with bags of money and willingly take abuse from Swope’s thuggish employees. Swope mistreats his staff as well, stealing their ideas to create a string of irrelevant and obscene ad campaigns, all of which are touted as a ‘new wave’ of marketing genius.

Putney Swope has shock value but its real power is in presenting ideas incompatible with MPAA-approved film content. Its obscenities are so refined, they’re baroque. Putney Swope’s crew of right-on Black Power advertising revolutionaries speak in an argot that intimidates middle class whites — a threatening language of exclusion. As a Black Power comedy, its only competition is the ‘Be Black Baby’ sequence in Brian De Palma’s Hi, Mom!

The movie coheres too well to be described as a collection of skits. The opening salvo is a killer, with a roomful of executive lizards (including Allen Garfield and Stan Gottlieb) jockeying for position literally over the body of their dead chairman. Somebody quotes the corporate by-laws that candidates can’t vote for themselves, and all the executives crumple their ballots and toss them into the center of the table. Lowly token Putney gets his ears boxed for suggesting that the agency refuse to sell cigarettes, alcohol and war toys. A few minutes later, most of Putney’s peers are out on the street, and he’s running Truth and Soul Advertising like a pirate captain looking for plunder.

This show thrives on vulgar cultural provocations — ‘Politically Incorrect’ doesn’t quite describe its appeal. A Chinese client excuses himself contentedly with the words, “I’m a happy Chink” — and that’s just a mild example. Instead of encouraging a ‘power to the people’ workplace paradise, Putney fashions Truth and Soul into a counterculture terror organization. Putney fires the creators of the company’s most successful campaigns, allowing him to take the credit. His agency is overrun with phonies, fumbling bodyguards and moody thugs anxious to stick it to whitey. Jive-talking hoodoo expert Arab (Antonio Fargas) has to be heard to be believed. The racial satire reaches its zenith when Putney’s henchmen rough up a group of ass-kissing white clients, all of whom have brought million-dollar payments just for the privilege of being represented by Truth and Soul. The clients are kicked, slapped and cursed, yet maintain smiles of gratitude.

Putney beds one agency ‘mama’ and is tricked into marriage by another. He takes phone calls from the U.S. President Mimeo (Pepi Hermine), a dope-smoking midget whose Kissinger-like German advisor (Larry Wolf) offers up horribly tasteless jokes. The advisor wants Swope to create ads for his car, the ‘Bormann 6.’ It’s the least palatable and most dated satirical idea in the movie. 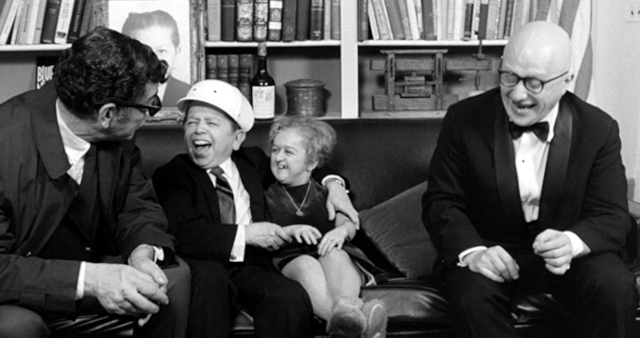 It’s a B&W movie, but several parody TV commercials appear in full color. Some are overlong but almost all are screamingly funny, especially the classic Ethereal Cereal spot and a drawn-out and verbally obscene romantic musical piece between Ronnie Dyson and famous model Shelley Plimpton. Some have no connection whatsoever to the product being hawked, such as a killer disco dance in an alley. An ad for “Lucky Airlines” shows four near-nude stewardesses cavorting in slow motion in a padded plane compartment. After about four minutes, an announcer says that a certain lucky ticket holder should report to the Prize Room!

Swope terrorizes and patronizes his few remaining white employees, all but his top copywriter Sonny Williams (Perry Gerwitz). The skinny, bearded Sonny roams the city exposing himself and getting thrown in jail. Putney’s men finally drag him into the agency just as Antonio Fargas’ Arab is plaguing Swope with his latest jive critique: Truth and Soul has sold out and lost the dream, blah blah. Sonny appears in the background, and both men turn just in time to see him throw open his coat to proudly expose himself. (top image  ↑)  There’s the answer! shouts Arab: That dude hasn’t sold out, man, he’s doing his thing! The jokes in Putney Swope are always dead on direct. 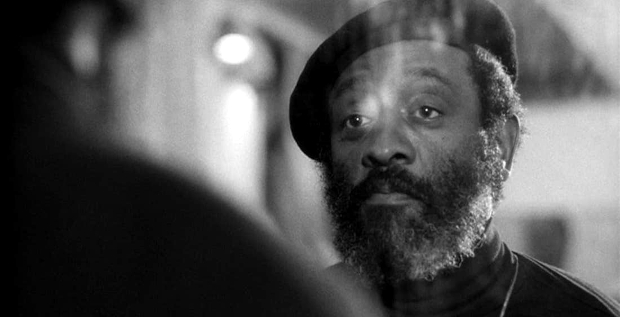 A great many social satires are one- or two-joke flops that can’t sustain their momentum. Take-offs on advertising, TV, and politics eventually fall apart, through repetition if for no other reason. Putney Swope has both the wit and the willingness to go all the way with its material. It dares to make wicked fun of oversexed blacks with exaggerated egos.

Director Downey dubbed the gravelly voice for Putney Swope, when actor Arnold Johnson couldn’t remember dialogue lines. That’s essentially a white performer doing a comic black voice, but nobody compared the film to the cultural quicksand precedent Amos & Andy. We enjoy seeing the sheer range of Downey’s actors — the very long cast list includes dozens of speaking roles. Stanley Gottlieb has a field day as the one white executive retained by Putney — we know the actor from The Anderson Tapes and Cold Turkey. This is also an early film featuring the late great Allen Garfield, who I remember fondly — at this point he’d only had a bit in one Brian De Palma picture. 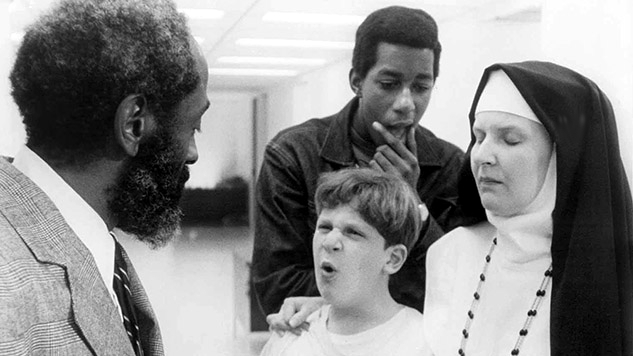 Powerhouse Indicator’s Region Free Blu-ray of Putney Swope is a perfect 4K restoration by the Academy Film Archive and the Film Foundation, with excellent B&W tones throughout. It plays fine in this encoding’s full-frame aspect ratio, but in theaters it was definitely cropped for widescreen. In 35mm the color sections jumped to a different film stock, forcing the projectionist to re-focus. Here everything is clear and clean.

With a commentary and interviews on- and off-camera Robert Downey covers all bases for Putney Swope, with a lot of content overlap. The filmmaker comes off as impressively sane and plain-spoken. He’s perfectly serious when he says that he isn’t convinced the show is ‘relevant,’ or was ever relevant. The late Sergio Mims chimes in with a second track.

Downey explains that he was at a creative advertising film company that was encouraged to shoot ‘experimental’ commercials, often with wild, unuseable content, just for ad execs to say they encouraged creativity and irreverence. (One of the notorious underground filmmaker Kuchar Brothers once complained that an ad agency had ripped them off. They were invited to show their movies, after which the ad folk picked their brains for free ‘avant-garde’ ideas.) 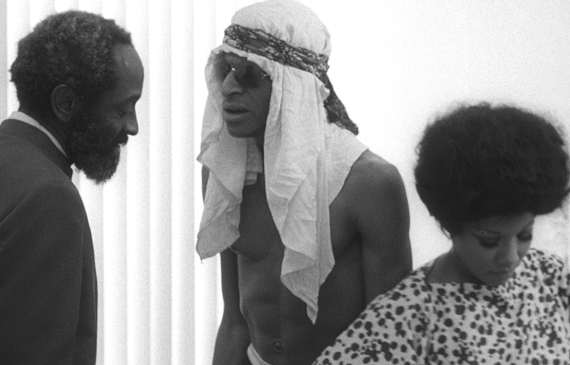 Mainstream companies found the picture too crude, but Cinema 5 gave it a good send-off — Downey says that Swope was the only one of his films given a coordinated distribution.

From a 2019 Vinegar Syndrome disc comes a 20-minute audio interview with cinematographer Gerald Cotts, who did a bang-up job considering that he had never before filmed in 35mm. Cotts explains that many on the crew were amateurs, or ‘visiting artists.’ Another 2016 audio interview gives us an energetic half-hour with Bruce Goldstein talking to Robert Downey on the stage of The Film Forum.

The original trailer is just parts of two of the film’s most raunchy-offbeat scenes. A movie like Putney Swope can’t be promoted with anything conventional.

In Indicator’s insert booklet, Christina Newland’s essay makes some good connections with later satires, like Network — while still calling out much of the absurdist humor as sub-sophomoric and cruel. Richard Whitehall takes an overview of Downey’s career in a reprint from the Los Angeles Free Press.