A spoof? A black comedy? Michael Hodges and Michael Caine’s hardboiled ‘foreign intrigue’ comedy lays on the movie references and clever dialogue, going the distance in the arcane, hipster-noir subgenre. Caine is always good in that mode, and Mickey Rooney gets a supporting role that can only be called bizarre. 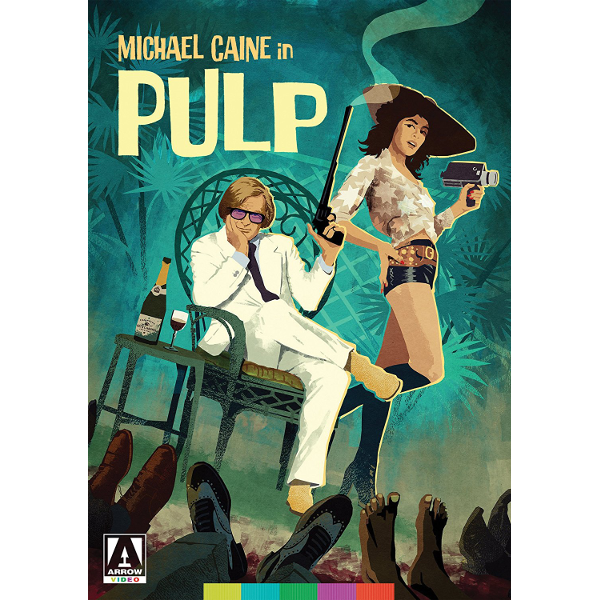 After their success with the brutal, now-classic gangster thriller Get Carter, the ‘three Michaels’ Caine, Hodges and Klinger came up with this precociously spoofy takeoff on cheap pulp mysteries, appropriately titled Pulp. Filmed in sunny Malta, Pulp drops the unflappable Michael Caine into a standard tale of murder and intrigue that is probably too reserved and ‘cute’ to really work. As a thriller nothing all that exciting happens, and it’s just not ha-ha funny enough to qualify as an out-and-out comedy. Just the same, the film has an amiable, laid-back tone all its own. It’s definitely different, and lovers of hardboiled detective fiction and Hollywood trivia may love it. Ex-mortician, present trash paperback author Mickey King (Michael Caine) writes under a half-dozen aliases. A mysterious figure engages the writer to ghost-author his memoirs. Even though a man (Al Lettieri) is mysteriously killed in his hotel room, King perseveres and meets up with his employer’s unusual retainers, the beautiful Liz Adams (Nadia Cassini) and the old-school gangster Ben Dinuccio (Lionel Stander). The mystery employer turns out to be Preston Gilbert (Mickey Rooney), a famous movie star with alleged Mafia connections who wants to tell all about his years in Hollywood. But it appears that Gilbert’s old underworld buddies don’t want the book to come out: assassins are on the prowl for both the ex-movie star and his ghostwriter.

The concept of film noir was barely known in cinema circles in 1972, so the closest point of reference for the satirical film Pulp was probably the fan revival interest in Humphrey Bogart tough guy movies. The best thing in Mike Hodges’ sly script are Mickey King’s hardboiled voiceovers, either quotes from his sub-Spillane ‘sex & pistol’ thrillers, or his subjective running account as he mentally narrates his own story. When King’s laconic prose conflicts with what we see on screen, the effect is often hilarious. When shot in the leg, King’s narration reports that he soldiers on in defiance of his attackers, despite being wounded. The on-screen King notices blood on his clothing and faints dead away. Thanks to Caine’s perfect deadpan delivery, these gags work every time. The balance of the picture doesn’t maintain that level of wit, preferring to present amusing characters and ironic situations that remind us of the old movies King mines for his crummy books. Instead of a ride on the Orient Express, King takes a tourist bus with a pack of old fogies. Fellow traveler Al Lettieri may be a harmless college professor, or a hired killer. Nadia Cassini is a standard oversexed girl King contacts along the way; her presence reminds us only that the film has no real romantic interest. Gravel-voiced Lionel Stander is utterly dependable when it comes to hitting precise character notes (Cul-De-Sac, 1941) but in terms of the storyline turns out to be yet another eccentric voice making much ado about nothing. Noir legend Lizabeth Scott trades some snappy dialogue during lunches under the bright Mediterranean sun. The ironic script stays at arm’s length from its characters; Caine’s ultra-cool Mickey King doesn’t really interact with any of them. When King finally becomes the target of an unseen killer, his panicked reaction simply seems out of character.

In other words, the people of Pulp are interesting enough. It’s just that the hipster screenplay goes out of its way to make them all inconsequential.

Hodges’ film isn’t clever enough to successfully undercut its own mystery premise, as John Huston and Truman Capote had done in their classic black comedy Beat the Devil. As each new character or situation is revealed to be irrelevant, like Dennis Price’s mock-sinister English intellectual, there’s little payoff to be had. We’re eventually left enjoying Michael Caine’s deadpan reactions. Yes, the movie is vaguely hip, but the lack of nourishing content eventually becomes a drag. Caine, incidentally, was a producer on the picture, uncredited. The show picks up dramatically with the entrance of Mickey Rooney, who has a field day as the narcissistic ex-movie star Preston Gilbert. Rooney preens before a mirror in his underwear, carefully arranges his wig and pretends that he’s taller than he is; everything he does seems to be some kind of ego compensation. Gilbert is roughly modeled on the old star George Raft, which leads to the revelation that his old Mafia pals want to rub him out to suppress his autobiography. Like most of the ‘plot’ in Pulp, that part of the story never develops beyond rumor status.

Preston Gilbert’s treatment of Nadia Cassini is appropriately vulgar, playing against Mickey Rooney’s ‘Andy Hardy’ persona, which persisted no matter how many adult-themed pictures he made. In an effort to give the versatile Rooney something to do, Hodges has him perform unfunny slapstick like locking a servant in a steam closet and going through a lame ‘bad waiter’ routine. The director just winds Rooney up and lets the other actors observe him and react.

Alternately, we wonder if Rooney himself suggested these scenes, and improvised them. When he flexes his muscles in his underwear, the shot goes on just long enough to give us the idea that Rooney isn’t happy with what he’s doing (or how it must look to the camera). The fact that the character isn’t supposed to be charming or funny doesn’t wash; it’s as if the Wit Spigot suddenly ran dry. Gilbert’s prompt exit from the story after only a handful of scenes is like too many things in Pulp: it just lacks impact. A complicated political tangle is beneath all the mysterioso trappings . . . but all we care about are the comedy bits. Amusing characters are scattered around this intentional lampoon of hardboiled pulp fiction. Robert Sacchi’s American police representative seems to be present just to remind us of Humphrey Bogart; he does next to nothing. The wonderful Italian comic actor Leopoldo Trieste (The White Sheik) has a rather thankless bit as a nervous publisher with a urinary problem. Frequent giallo actor Luciano Pigozzi (Blood and Black Lace) became known as the European Peter Lorre, which is exactly the vibe he gives off here as a clairvoyant. Along with Dennis Price’s puzzling contribution quoting Lewis Carroll, most of these colorful diversions just serve to bog the story down.

Meandering about atmospheric Maltese locations, Pulp eventually becomes a big Shaggy Dog Story. What we remember best are the score of females in the pulp paperback typing pool, that become aroused while transcribing soft-core passages from Mickey King’s dictation tapes — ‘His face was a mass of bloody flesh,’ ‘I ran my hand across her tight body…’ etc.. The final beach showdown is also good, although it can’t compensate for the general slackness. Pulp seems to have been a ‘vacation’ movie, as if its makers wanted something light and hip to help them bounce back from the oppressive Get Carter.

Arrow Video USA’s DVD of Pulp is quite handsome, bettering a just-okay MGM DVD from 2007. A Blu-ray is also offered, but I reviewed from the DVD. The quality widescreen scan favors the sunny Maltese exteriors; otherwise the movie isn’t all that memorably designed. Director Hodges’ recurring setup is to show Michael Caine waiting patiently in a frame where nothing is happening. George Martin’s amusing music score plays up the quirky proceedings in high black comedy style, and the main theme is bouncy-fun.

Arrow’s extras answer most all questions about the show. New interviews come from writer-director Mike Hodges, cameraman Ousama Rawi, AD and editor John Glen, and Tony Klinger. Hodges is a fine raconteur. He says that the show was indeed an outgrowth of the success of Get Carter. The story was sourced in a particular instance of Italian political corruption. They filmed in Malta because (according to Hodges) the Mafia expected payment for anything filmed anywhere in Italy (!). The director compliments Caine, says that Mickey Rooney was difficult to control, and that Lizabeth Scott was insecure over not being protected with ‘special’ cinematography to hide her age. Hodges also talks about rediscovering the trailer he shot for the film, a truly hip piece using new footage of Lionel Stander. He says it was never used. The cinematographer and the son of the producer give their individual experiences on the film, relating various memories and pretty much agreeing that Mickey Rooney was a pain — not really a troublemaker, but not really taking direction. Hodges is impressed that Rooney made his character even nastier than written. Editor Glen (the genius cutter of On Her Majesty’s Secret Service) thinks that the movie’s problem is the exit of Preston Gilbert at the 3/4 mark . . . he found it difficult to keep up the tension from that point forward.

Several galleries of stills and ad art are included, plus the trailer that Hodges remembered not being used, taken from a scan that crops the widescreen image on the sides. In Los Angeles Pulp opened at the National Westwood when Savant was an usher. I don’t remember any large audiences and I don’t think it played very long, but I do remember that the ‘unused’ trailer was shown the week before, because we all thought it was funny. Seeing odd trailer tests wasn’t unusual in a ‘flagship’ theater like the National; before The Exorcist they tried out some great teaser trailer experiments, including one that made its official debut thirty years later on DVD.

I do remember working the first Saturday matinee of Pulp, and running into Mickey Rooney in the lobby. I recognized him and smiled. Before I could speak he grabbed my hand for a hearty handshake, practically shouted “Really nice to meet you!” and moved on. It was sort of a polite bum’s rush, a way of being civil but also not having to deal with a skinny, long-haired kid. In other words, pure Tinseltown phony, but also the Real Deal. Fair enough, I thought. It was a lot nicer than being snubbed, intimidated or insulted by the usual Hollywood celebrity.

Arrow’s attractive new cover art looks a bit like something for Austin Powers. It’s not quite the right look for the movie. The original poster art is on the reversible cover paper. It didn’t quite capture the film’s vibe either, although its tag line does . . . I remember working next to a one-sheet of that show in the National’s lobby for weeks on end.