Make way for the ribald, very non-PC adventures of the GI doofus Private Snafu — demonstrator of the wrong way to do everything. This alternative-press edition of Snafu delights contains all of his adventures and more — they’re mostly animated by irreverent Warners talent. Some have rhyming dialogue and narration by Theodore Geisel, aka Dr. Seuss. 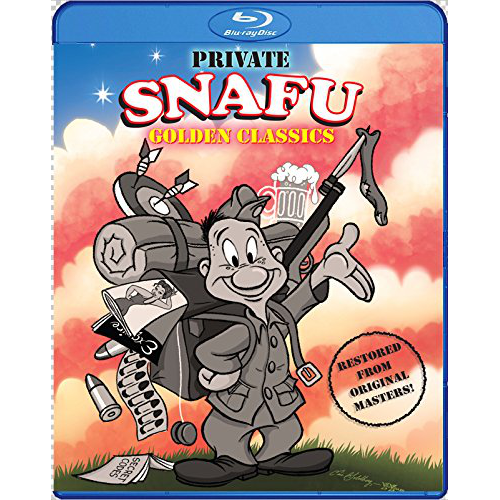 I just learned a secret, it’s a honey, it’s a pip.
But the enemy is listening, so I’ll never let it slip.
‘Cause when I learn a secret, boy, I zipper up my lip!

Even us 1950s kids had to wait to find out about Private Snafu cartoons, a WW2 phenomenon produced only for the troops, not the general public. As part of the war effort’s plan to use film to indoctrinate and motivate America’s enormous new ‘civilian’ army, Frank Capra made remarkable propaganda films explaining ‘why we fight.’ But he also oversaw (in a remote supervisory way) entertainment to be sent to the troops. 16mm prints of Hollywood films were accompanied by newsreel compilations, headlined by War Department informational films. Thus was invented ‘Private Snafu,’ who starred in (relatively) daring cartoons for the mostly very young soldiers. A total fool and bad-example Goofus, the hilariously entertaining Snafu boosted morale while disseminating official messages. Hollywood’s animation studios bid for the honor of producing the B&W mini-cartoons, which were barely over three minutes long; Warners’ outfit ended up doing most all of them. 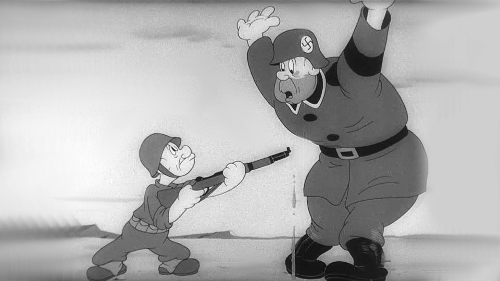 The shorts were preceded by a text card citing a War Department rule that allows them to be shown only to selected military audiences. They began to emerge from obscurity about the same time that halfway decent quality copies began to surface of Warners’ ‘taboo’ cartoons, the ones with outrageous racist content, like Coal Black and de Sebben Dwarfs (1943). When Snafu appeared, we instantly recognized the wild Warners character animation, the versatile voice work of Mel Blanc and the antic music of Carl W. Stalling. The audio tracks for these shows are every bit as hectic as Warners’ mainstream cartoons. Theodore Geisel’s rhyming dialogue is often hilarious… Private Snafu is a mischievous, goldbrick-ing cousin of The Cat in the Hat and Horton Hatches the Egg:

I beg pardon sir, you hear all that humming?
I got a suspicion the Joy-mans are coming!

But the content is definitely adult. Away from the censors and blue-noses, WB’s animators were given much more latitude with Army-approved vulgar GI humor, both verbal and visual. A cold combat climate is said to ‘freeze the nuts off a jeep.’ Snafu’s idiot status is repeatedly confirmed by a dissolve from his dopey face to a literal horse’s ass. The maladroit soldier’s naked butt hangs out all the time, especially when he’s being targeted by malaria-carrying mosquitoes.

The name ‘Snafu’ was of course too vulgar for civilian audiences. For the cartoons the actual phrase SITUATION NORMAL ALL FUCKED UP was nervously given its fallback reading, the less jarring FOULED UP. This ‘plain talk’ honest nod to sarcastic obscenity hit a responsive nerve with the more or less captive Armed Forces audience, which was eager to feel empowered. A cartoon horse spreads manure as if tossing posies, and then remarks on how well he makes things grow — a joke likely aimed at farm boys that were shoveling the stuff just a few months before.

In one scene Snafu literally pulls a live carrier pigeon out of his rear end… a completely gratuitous bit of grossness that surely got a big laugh. 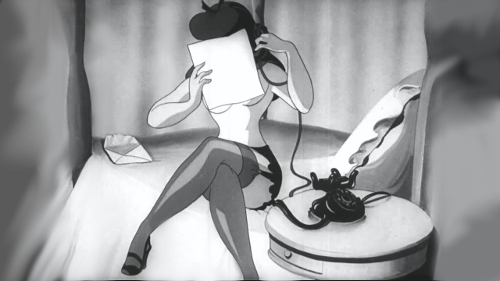 WB’s wild men must have felt really liberated when incorporating images of semi-nude females into the cartoons — some appear to be rotoscoped from live models. In a cartoon about keeping Army secrets, an exaggerated seductress transmits Snafu’s foolish blathering through breasts that transform into Big Round microphones. The short Booby Traps sees Snafu arriving at a tent filled with a harem of unclothed babes. Slobbering in lust, he then runs to embrace the thing that attracts him most: a PIANO. Even Snafu’s back-home girlfriend is ready to perform pin-up duty, with a low-cut dress that the Production Code would never have allowed, animated or not.

The Warner stylists use full animation to characterize Snafu as a cheerful idiot, going mano-a-mano against thuggish German Huns and stereotyped buck-toothed ‘Japs.’ Tojo, Hitler and Mussolini are all caricatured; at one point Hitler and The Devil become one and the same. Some of the phantom characters in one short directed by Bob Clampett, appear to be recycled from the cartoon Porky in Wackyland. 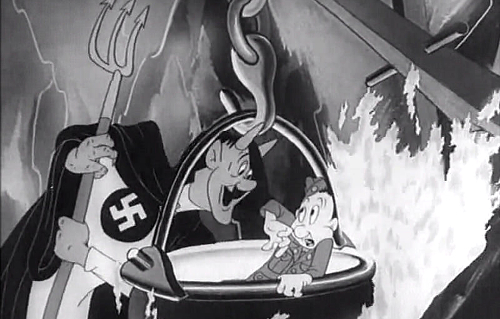 The fact that this was War Department work freed the animators to appropriate a wide range of music. We hear Paramount’s Superman theme for the cartoon Snafuperman, for instance. Just as in the standard WB cartoons, contemporary comics are lampooned. An occasional pansy slight slips through, as when an animal says, “I didn’t know you CARED.” Snafu’s fairy godmother figure is a somewhat Popeye-like sprite with Sergeant’s stripes on his dragonfly wings, who goes by the name ‘Technical Fairy, First Class.’ In one cartoon the TFC makes Snafu the big boss, endowing him with extra-large chevron insignia with twenty stripes.

The shows have no standard titles or credits, but instead use just a few title cards that slam on. Some titles resemble the ones cobbled together for the studio blooper reels seen on some WB releases. The brief cartoons end with a rousing martial fanfare over a big ‘V’ for Victory. Some shorts finish with a close-up of a ringing Liberty Bell, a symbol Frank Capra also used on the Why We Fight films, and on his postwar Liberty Pictures release  It’s A Wonderful Life.

With only 26 official cartoons (are there more to be discovered?) released over three years, the basic schedule target appears to have been one a month. They continued to the beginning of 1946, which makes sense if one remembers that it took half a year to fully ‘bring the boys home.’ 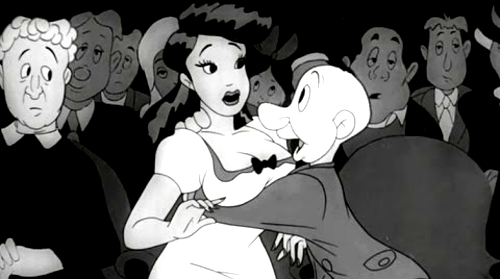 The package contains the Snafu Cartoons plus the extra ‘A Few Quick Facts’ shorts, quickie informative pieces that range from news about a new class of battleship, to facts about Diarrhea and Dysentery, to a full rundown on the marvelous benefits of the G.I. Bill.

Here are the  Private Snafu  titles:

Some titles explain themselves. The biggest perceived Army problem must have been to keep servicemen from blabbing military secrets, as several cartoons are assigned to that problem. A few are closer to straight entertainment, as with Operation Snafu, which simply has our hero steal Japanese secrets right out from under the nose of a sword-wielding enemy officer. It’s MURDER she says… tells the woes of a mosquito being put out of business by anti-malaria precautions, only the mosquito in question is an elaborate takeoff on a bloozy prostitute, who lives in a mosquito ‘brothel.’ Perhaps it was meant to put GIs off prostitutes, too.

The Chow Hound shows an American steer happily volunteering to become meat, which is painstakingly shipped around the world to feed Snafu, who then wastefully serves himself big portions that he can’t eat. Later shorts assure soldiers that their far-flung missions aren’t forgotten: Private Snafu in the Aleutians is self-explanatory. Hot Spot concentrates on our friends in IRAN, where we’re unloading cargoes to be trucked and train-shipped to the U.S.S.R. (that’s short for Russia). How times do change. 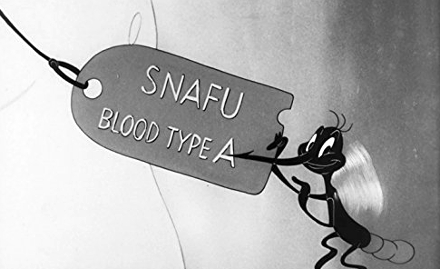 The titles on the A Few Quick Facts short subjects are even more self-explanatory:

These shorts sometimes feature cameo appearances by Private Snafu, but others are simple slide shows dispensing vital information (Voting for Servicemen). Another entreats Snafu-types to stop trying to heat up their boots on a stove! Was the 1945 short addressing ‘Fear’ aimed at the jitters of troops being readied to invade the Japanese mainland? 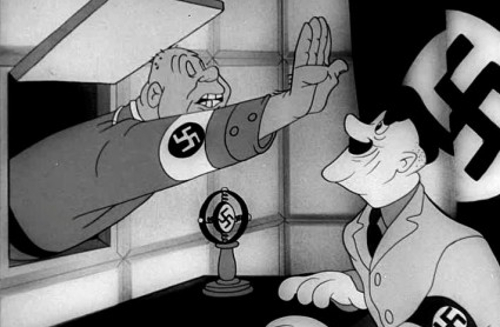 Thunderbean Animation’s Blu-ray of Private Snafu Golden Classics is definitely not ‘SNAFU.’ When I did animation extras for WB (yes, rather a long time ago) all they had were some ragged transfers of 16mm prints, which I understand was the only release format for these shorts. Thunderbean has located good video on everything; most of the soundtracks are very clear and only a couple are (technical term) ‘crunchy’ — slightly distorted and compressed. A couple of end fanfares are missing but otherwise they look quite good — the video restoration applied for HD is more than adequate. The independent outfit Thunderbean has been putting out interesting animation discs for about twenty years; I should have been promoting their product long ago.

Extras on the disc include a short piece by Jerry Beck explaining the series, and a number of commentaries on individual cartoons, from Mike Kazaleh, Jerry Beck, Eric Goldberg, Mark Mayerson and John Kricfalusi. Also present are scripts, storyboards and original artwork, notes and titles from the Army/Navy magazine. An alternate soundtrack is provided for one cartoon. A few minutes of behind-the-scenes footage in the animation studio includes what we believe is the same Private Snafu maquette statue sculpted by Ray Harryhausen, the one where he’s carrying rolls of toilet tissue. 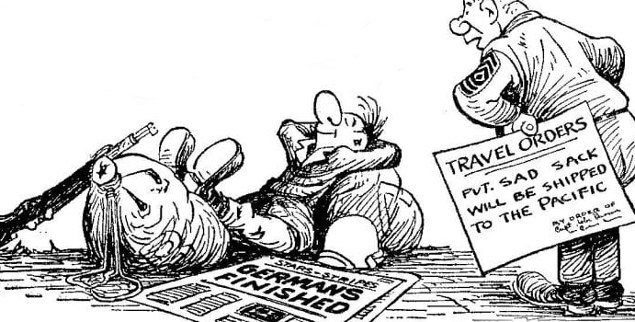 Private Snafu often reminds me of Sgt. George Baker’s Sad Sack character, whose name was also sourced from a profane figure of speech. My airman dad taught me several useful bits of military jargon, but not those two. My parents had both of Baker’s hardbound Sad Sack cartoon books when I was a kid, and I loved them even as I tried to fathom some of the contemporary references. Sad Sack wasn’t a total moron, and the emphasis was on the way he suffered the hardships of service life. Private Sack was a key continuing cartoon in the magazine Yank, The Army Weekly, while Snafu stayed mostly on the screen. I suppose that Sad Sack’s contemporary successor is Beetle Bailey.

Sad Sack’s adventures did teach a few good life lessons. Case in point from a cartoon remembered perfectly from fifty years ago: Sad Sack and a large U.S. tank are pinned down by enemy fire in the jungle. The Tank commander gestures for the lowly Sad Sack to go forward and take out the attackers. Sad Sack protests — why should he go when the heavily armored tank is right here?  The commander points at the tank and says “$40,000 Dollars.” He then points at Sad Sack, and says “$79.50/month.” In the final panel the expendable Sad Sack is seen creeping forward alone, to do the fighting.