Nurses‑make‑out saga is passable fodder for drive‑ins, with mild nudity values for ogling by the soft‑core male contingent. Rating: R. 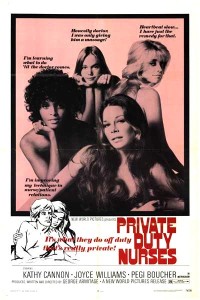 This sequel to the recent and fairly successful The Student Nurses again mixes TV soap opera plotting, youth clichés and sex, but this time out the formula fizzles. Exuding a general aura of familiarity, the dreary New World Pictures release will have to settle for lower‑berth dual billing in those situations where its forerunner paid off. Best prospects are in drive‑in slottings. The writing‑directing chores herein were entrusted to George Armitage, a Roger Corman protégé (he wrote GAS‑S‑S) making his directorial bow. Apart from one or two mild attempts at parodying the genre, he seems content to play this overworked material straight—a mistake which results in a listless, meandering film with no surprises. Blonde Kathy Cannon, black Joyce Williams and brunette Pegi Boucher are the three nubile nurses who fall in love at the drop of a bedpan.

Miss Cannon falls for an embittered hippie war veteran who piles up during a motorcycle race, thereby complicating his old wartime brain injury and causing no end of telegraphed anxiety. Miss Williams hitches up with an uptight black doctor who stages a sit‑in in the hospital administrator’s office to make him hire more black doctors. Poor Miss Boucher has the worst time of all—she’s picked up by an impotent creep (played with improvisational realism by Paul Hampton), gets raped by a Chicano junkie and watches as her ecology‑minded doctor boyfriend is shot dead by a heartless narcotics agent. Some nudity (not enough), a few operations, some dirty words and plenty of ennui are sprinkled throughout. Acting is semi‑okay, considering no one really has much to do. The rock music score by Sky is suitably bland. Producer Everett Chambers receives no screen credit, probably at his own request.