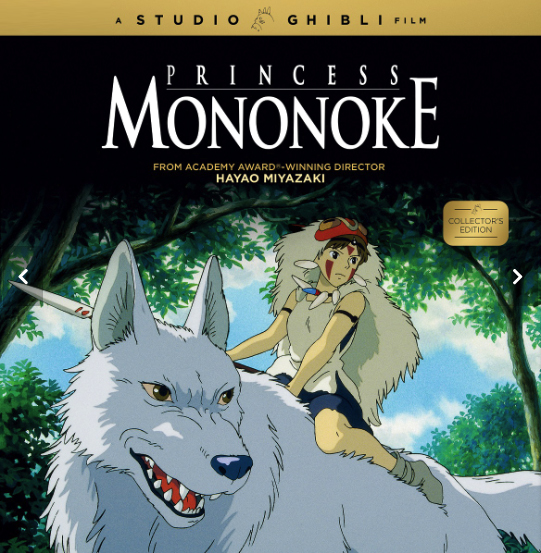 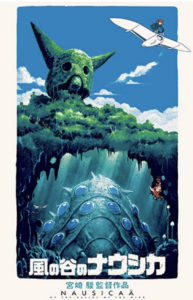 Hayao Miyazaki spent much of his early career as an artist and animator on children’s fare like Gulliver’s Travels Beyond the Moon and Puss in Boots, each as energetic as a school recess and as uncomplicated as a bedtime story. From such modest beginnings a mighty oak grew… an entire forest in fact.

In 1984 Miyazaki wrote and directed Nausicaä of the Valley of the Wind – an environmentalist jeremiad in cartoon form that was anything but uncomplicated. The film was so successful it led to the founding of Studio Ghibli, a made-to-order workshop for Miyazaki’s passion projects. In 1997, a few years after the  storybook moods of My Neighbor Totoro and Kiki’s Delivery Service, Miyazaki returned to the forest with a purpose, combining the epic storytelling of Nausicaä with the introspective qualities of classic Japanese filmmaking. 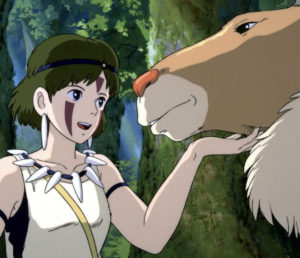 Princess Mononoke is a mythological marvel in which ancient legend collides with the here and now. Alive with fantastic creatures and enough characters for a Dickens novel, at its core it is a war film about the industrial revolution and mother nature’s furious response. In Miyazaki’s ecological epic the humble peach blossom can move mountains.

Set in an enchanted era when woodlands and waterfalls breath with life and animals are upheld as gods, Mononoke is the story of young Ashitaka, the last prince of the Emishi tribe whose battle with a rampaging boar leads to the destruction of his homeland. 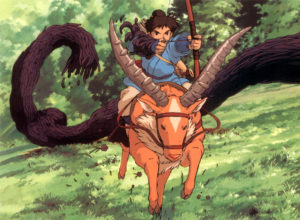 That monster pig is infected with hatred – hatred that Miyazaki illustrates in the form of hyperactive snakes that smother and provoke the animal as it steamrolls its victims. Ashitaka emerges from the fray victorious but mortally wounded. Infected by the malignant poison that brought down the boar, he sets out on a journey to ask the Forest Spirit (a stadium-sized deer creature) to remove the curse.

Along the way Ashitaka reluctantly takes on a companion, a sardonic monk inclined to slapstick humor named Jigo (“So, you say you’re under a curse. So what, so’s the whole damn world.”) Soon enough the two adventurers find themselves at the center of a land war between the creatures of the forest and the citizens of Irontown – an imperious fortress perched high in the mountains that is devastating the countryside. 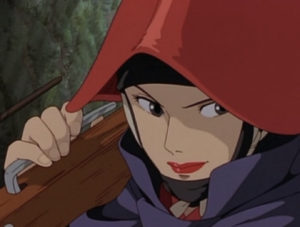 Lady Eboshi is the mistress of Irontown – she’s as icy as The Snow Queen yet kindly where it counts (she provides a home and factory jobs to exiled lepers). It was Eboshi who poisoned the demon boar using a musket ball forged in her own foundry. When the matriarch explains her laissez faire game plan – “With the forest of wolves gone, there will be a land of riches” – you can practically hear Mitch McConnell licking his lips.

Eboshi is hell-bent on destroying the Forest Spirit while San, a young girl who has forsaken her humanity to live with the wolves, is intent on stopping her. The athletic feral child has the help of her wolf-mother Moro and the majestic Okkoto, the éminence grise of the boar clan. Even swine are honored in Miyazaki’s universe – when the pigs prepare for the final confrontation they paint their snouts using mud as war paint. 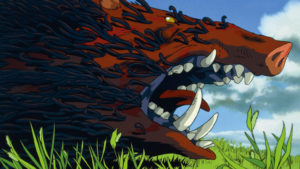 There are images in this film that could have been plucked from the nightmares of a 13th century magician – the ominously cute forest sprites that litter the landscape for instance – not to mention those cursed snakes and the blob-like ooze that pours out of the dying deer god and burns through the countryside like acid.

There are also startling moments of compassion – San heals Moro by sucking the blood from her wounds and feeds the injured Ashitaka like a mother bird, chewing up leaves and spitting the dregs into his mouth. These sequences recall the brutal survivalist tactics in Jan Troell’s The Emigrants and The New Land.

That rawness extends to the show-no-mercy battle scenes – heads and fingers go flying and one major character suffers a fate that Tarantino would mimic in Kill Bill (albeit far more graphically). Still, sturdy youngsters should be able cope with the matter-of-fact carnage – the bloody action is strictly PG-13. 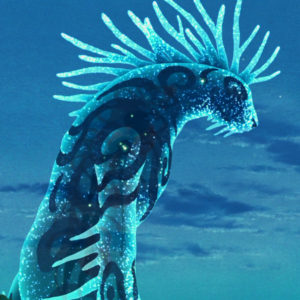 In a rare break in the battle Miyazaki’s gaze settles on a frail old woman – one of the outcast lepers too weak to walk. She whispers through her bandages, “Life is suffering. It is hard. The world is cursed. But we still wish to live.” Those words could be the libretto for Joe Hisaishi‘s beautifully solemn score – the longtime Miyazaki composer’s music maneuvers between meditation and timpani-powered pandemonium with ease.

The Blu ray package itself is a beauty – a square keep case containing, among other treats, two discs – the Blu ray and Hisaishi’s soundtrack on cd.

The box also includes a 40-Page booklet with a typically thoughtful essay from Glenn Kenny, feature-length storyboards, a look at the voice artists Behind the Microphone and a video record of Miyazaki’s promotional tour for Mononoke called Princess Mononoke in USA (the reserved Miyazaki is hilariously relieved when the tour comes to its end).

TV Spots and original trailers round out the supplements.