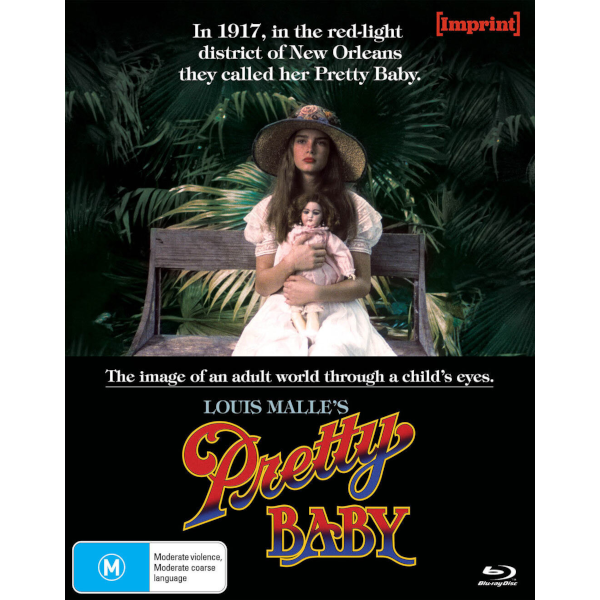 Some recent news reported that actors Olivia Hussey and Leonard Whiting were suing the makers of 1968’s Romeo and Juliet, accusing the studio of sexually exploiting adolescent children. When cancel culture forces align with conservative crazies, there may be no hope left for future filmmakers. Franco Zeffirelli’s film is so tame . . . one can imagine Louis Malle’s masterpiece Pretty Baby being seriously suppressed.

The 1978 release was the first American, English-language feature by the esteemed French director, whose films had paralleled and often bettered those of the French New Wave: Elevator to the Gallows, The Fire Within. It’s said that Malle never made the same kind of film twice. He challenged the rules for screen content, with obscenity charges leveled against The Lovers (1958). His 1971 Murmur of the Heart touches on even more delicate matters of sexuality.

As had other celebrity European filmmakers before him, Malle came to America with a special deal. His main collaborator on this picture was Polly Platt, the art director- turned writer and producer. Previously buried under the reputation of a director-husband, Platt provided the film’s story, co-wrote the script with Malle and co-produced. She reportedly kept the Pretty Baby set in motion, and more importantly, helped keep it independent of studio interference.

The true story of the New Orleans red light district known as Storyville comes from anecdotes recorded in a 1974 book written by Al Rose. Still-living witnesses to Storyville recounted their experience in raw detail. The movie’s brothel pianist is based on none other then the famous Jelly Roll Morton, who in addition to reinventing jazz piano was also a pimp. Storyville was legally established, and not shut down until 1917.

The film is less of an exposé than a recreation of peculiar lifestyle. It dispenses with the moralizing tone routinely imposed by Hollywood, even after the fall of Production Code censorship. How the madam and her prostitutes ply their business is refreshingly free of sensationalism. Prostitution in any form is of course exploitative but the women presented here appear to be neither prisoners nor powerless. The Storyville district is only a few degrees shy of civic respectabilty, occasional reform movements aside.

The angle that shocked some in 1978 should have been obvious. Children are born into the brothel life and some grow up in it. The movie begins with a young girl witnessing activity we assume is sexual — we hear moaning on the soundtrack. It is sexual but in a different way — she’s watching her prostitute mother deliver her new baby brother. Child model turned actress Brooke Shields became a household word with Pretty Baby — the show gained instant notoriety when the buzz across the mediascape turned to thoughts of ‘interfering with the morals of a minor.’ Shields was 13 years old during filming. We remember reading editorials that asked, “What kind of stage mother would allow her daughter to perform in such a thing?”

The controversy of that aspect of the movie never developed into a call for suppression or legal action, as would seem very possible in today’s social climate. We’re left with an original, special picture that takes a warmly human viewpoint. The show’s approach is more than mature, it’s insightful.

The New Orleans bawdy house run by Nell (singer Frances Faye) is home to a dozen prostitutes, several employees and various children. Hattie (Susan Sarandon) gives birth to a son while daughter Violet (Brooke Shields) looks on. The business transacted in the house is part of Violet’s normal childhood experience and she can’t wait until she’s old enough to do what her mother does. Photographer Bellocq (Keith Carradine) comes to do serious art studies of the women, but avoids sexual contact with them. He joins the pianist ‘Professor’ (Antonio Fargas) as part of the house’s retinue, mingling with important local men who can afford the house’s wares. Hattie frequently asserts that she has plans to change her life. Although she’s ready to pretend her past never existed, how can Violet, who has known nothing else, be expected to change?

Caught in handsome pastel images, Pretty Baby is a vibrant corner of an American life long ago swept under the carpet. In this originally French-administered city, a legal red light district was a community unto its own. Nell’s house is a going concern that serves fine meals and keeps (we’re told) clean women. They form a partial matriarchy that coheres when it comes to issues like taking care of little Violet and her brother. The film’s ‘urban pastorale’ is definitely rose-colored. It reminds us of an episode of Max Ophüls’ feature Le plaisir, about a house of prostitutes rewarded with a holiday in the country.

Beautiful young Violet knows no other form of existence. She defines her little life in terms of her future ability to be profitably seductive to men. The film points up rituals that were an accepted part of this social underworld. Like an inverse debutante, Violet is displayed naked on a litter to a table of men who will bid on the right to deflower her. This is of course a deplorable state of affairs; Pretty Baby is simply acknowledging that it existed. Violet is no victim of white slavery. She was born into this lifestyle, the same as her mother Hattie. 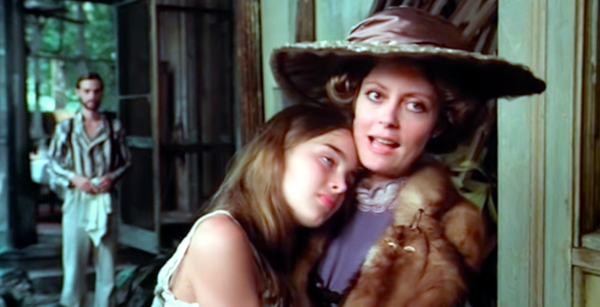 Both Violet and her baby brother are treated as the communal children of the house. The emotionally volatile Hattie copes as best she can; her occasional tantrums make perfect sense, as her world certainly doesn’t. Beautiful enough to pass her daughter off as a sister, Hattie keeps Violet at a slight remove. When Hattie is able to go away she simply leaves with a promise to return for them. There are no complaints from Nell or the other women. The house sometimes resembles a pride of lions where the females are in control and everyone looks after the cubs.

With Louis Malle at the helm Pretty Baby is a fine example of the so-called European sensibility at its best. What American director of the time could approach this subject as anything a grindhouse sleaze feature?  Traditionally, studio pictures with content even remotely approaching this were embarrassingly cautious — think Walk on the Wild Side. The liberation of the ratings system offered more opportunities for mature adult-themed movies — and also a lot of obvious exploitation.

One can’t praise Malle’s collaborator Polly Platt highly enough — she reportedly ran the show with Malle and contributed a great deal artistically. What goes on in Storyville is presented as a social and economic reality. We’re allowed to use our own intelligence to figure out that it’s no place for children, and that Violet and her brother are being given a warped outlook on life. There are no regrets when the houses are closed, we just hope that everyone lands on their feet.

A 1960 movie with Simone Signoret called Adua and her Friends dealt with the ‘closing of the houses’ in Italy, in 1959. It’s a much darker vision, implying that the new laws purposely took power away from the women, forcing them to work in the streets under the control of pimps. 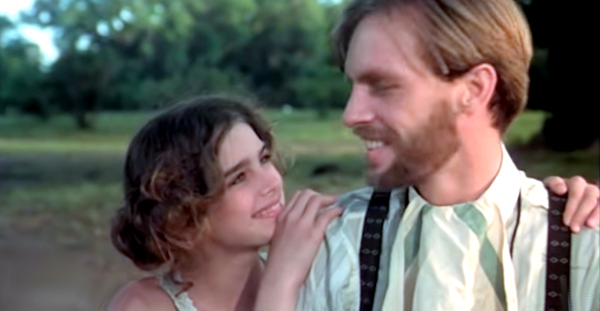 Malle’s very French picnic-on-the-river scene presents a fleeting, idyllic view of Storyville life. Unlike other movies that concentrate on the oppressive nature of prostitution, these women all seem to be saving their money. When it comes time to get out of town, all have decent clothes to wear and substantial piles of luggage.

Considering the way the temper of the country has changed, we’re almost surprised that Louis Malle wasn’t taken to task for contributing to the delinquency of minors. The filming appears to have been very carefully controlled. Interviews reveal that Polly Platt had a very strong and positive personality. Brooke Shields has also been vocal, insisting that she was in no way abused in any way during the filming. I would not believe Ms. Platt would have allowed anything untoward to happen.

We do know of films made around the same time, like Volker Schlöndorff’s The Tin Drum, that were harassed by censors misinterpreting the letter and intent of laws protecting children from exploitation. The factions today that might attack Pretty Baby would likely be more interested in a newsworthy target (big name star, deep pocket studio) without even seriously assessing the film. 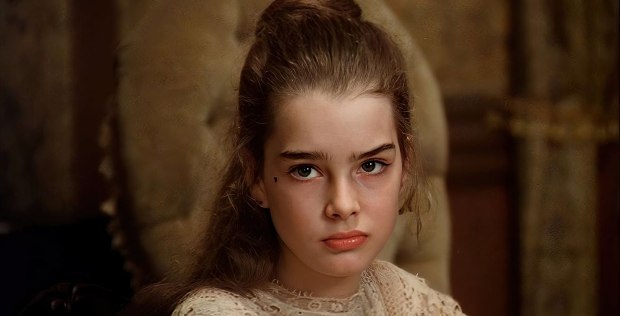 The young Brooke Shields is seen in situations where there could be no question that she was fully involved pretending to be a child prostitute. Her Violet ‘talks the talk’ here and there, and is in the vicinity of plenty of suggestive adult sexual activity. I hope that description does not amount to promoting illegal activity.

Perhaps the issue is reawakening for Pretty Baby as well, as cited in Owen Gleiberman’s Variety article from January 20 of this year, about a new documentary. Now the film is referred to as, ‘scandalous.’

Ms. Shields is a picture of innocence and Susan Sarandon has a field day generating heat waves, especially in her photo session with Bellocq. Keith Carradine shines in his characterization of an artist who slowly builds a relationship with a woman technically a child. It’s one of Carradine’s best movies, easily; director Malle steered him into a relaxed mode that betters his work in Robert Altman films.

The ensemble at Nell’s also includes Diana Scarwid (Inside Moves) and a highly interesting casting choice, cult figure Barbara Steele. Both aquit themselves well. Also making a strong showing is Antonio Fargas as Nell’s sly but wise piano player. We again wonder if Polly Platt’s expertise steered some of these excellent casting choices; she was always described as a creative powerhouse. 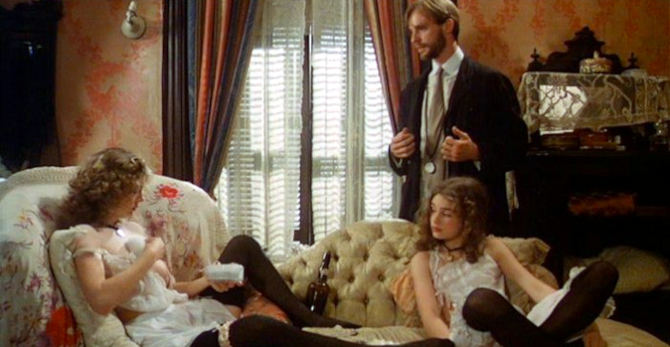 Viavision [Imprint]’s Blu-ray of Pretty Baby is listed as remastered by Paramount from a new 4K scan. The improvement over the 2003 DVD is of course remarkable. Cameraman Sven Nykvist brings a terrific ‘European light’ to the images. His warm, glowing photography matches Malle’s artful camera placement and gentle storytelling.

The film’s music is sourced from period themes, many played on the piano at Nell’s house. They include ragtime tunes by Jelly Roll Morton and Scott Joplin. The soundtrack takes care to bring in the ambient sound from the New Orleans ‘neighborhood.’ With all of its authentic location greenery the picture seems to be taking place in the tropics.

[Imprint] has taken the effort to generate good new extras. Kat Ellinger’s audio commentary examines the show in the context of its source book and fidelity to the history of ‘the houses.’ Daniel Kremer offers a wistful analysis of Louis Malle’s ‘Anglophone American’ period.

Best is a lengthy and candid interview with Brooke Shields, conducted by Caitlin Hughes. The star has a friendly and untroubled story to tell about her youth as a child model and her experience on Pretty Baby. Ms. Shield’s personality defuses one’s concerns about possible child abuse. She was already a seasoned model but took to filmmaking without complications. Our culture wants to be more protective of children today, with good reason. If one remembers Calvin Klein’s ads for blue jeans, it can be recalled that the retail fashion industry routinely sexualized underaged girls.

Brooke Shields doesn’t look primed to sue Paramount for her ‘exploitation.’ More righteous would be a lawsuit against the producers that condemned her to perform in the awful The Blue Lagoon and Sahara.

Everything about Pretty Baby is above board, especially its open-minded sexuality. Louis Malle and Polly Platt’s film is historically and artistically valid, allowing us little choice but to give them the benefit of the doubt. Good movie.