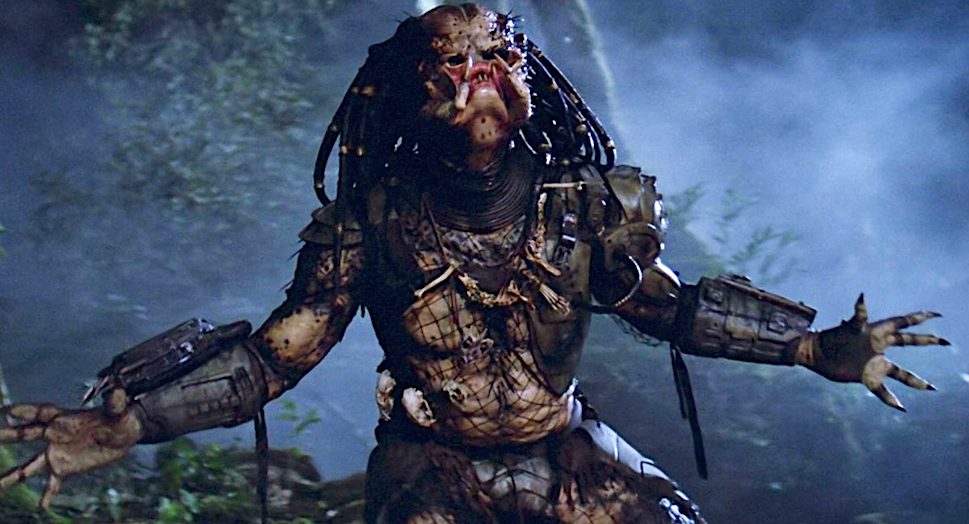 What would it take to overpower the world’s toughest special forces soldiers? A hunter from out of this world, of course.

That’s the spark that ignited Predator (1987), one of the all-time great sci-fi action adventures.  Released 35 years ago today, the film’s legacy is now secure: it has spawned three direct sequels and an upcoming prequel, plus two Alien Vs. Predator spin-off movies, along with a variety of comic book series, extremely cool action figures, and assorted other merchandise unusual for a gritty R-rated picture. Naturally we at TFH felt it was high time to reflect on the original classic.

Cigar-chomping Major Alan “Dutch” Schaefer (Arnold Schwarzenegger at his most ‘roided-out) and his crew of military mercenaries are recruited by his former Vietnam War comrade Al Dillon (Carl Weathers), now a CIA agent, to purportedly save foreign government officials, taken hostage by a team of guerrilla revolutionaries in a Central American jungle. When Dutch and his team, accompanied on their quest by Dillon, discover several Green Berets hung and skinned alive, they begin to realize that Dillon is withholding crucial mission intel. Eventually, Dutch wrestles the truth out of his old military buddy — the revolutionaries are actually backed by Soviet forces, and the CIA brought in first the Green Berets and now Dutch’s crew to prevent a Soviet Union takeover of the territory in an all-too-familiar proxy conflict.

After decimating the insurgent forces at a camp site, they take the lone remaining revolutionary, Anna Gonsalves (Elpidia Carrillo), with them as a hostage. En route to an exfiltration locale, Dutch and his men realize that Anna fears them less than she does a much more sinister force: a creature stalking them from the trees, rendered invisible to them thanks to a hi-tech stealth device. Soon, the team appreciates that the rebels did not skin and hang the Green Berets. Their new mystery enemy did. The largely-unseen Predator (Kevin Peter Hall, wearing a terrific Stan Winston animatronic mask) begins picking off some of the planet’s most lethal killers, and eventually we discover that the only reason they are being staked out is for sport. Their adversary is a hunter, and they’re the game.

Part of what makes the movie stand the test of time is its terrific and unique characterizations for the whole crew. Every character is bad-ass in his or her own way, and brings a certain unique chemical element to the table as the team does its darnedest to complete both its initial task and later its nearly-impossible mission against the extra-terrestrial beastie. Dutch’s crew comprises an All-Star roster of intimidating tough guys. Jesse “The Body” Ventura, an actual Vietnam vet, plays the tobacco-chewing sexual Tyrannosaurus who ain’t got time to bleed Blain Cooper. TFH Guru Bill Duke plays Sergeant Mac Eliot, the team’s machine gun specialist who shaves when he gets nervous. The Movies That Made Me podcast guest Shane Black, generally a screenwriter albeit with some legit acting chops, portrays fast-talking radio operator Rick Hawkins. Sonny Landham, who purportedly was something of a real-life wild card on set (and eventually ran for governor in Kentucky himself, though unlike his costars, he did not win), plays hard-nosed tracker Billy Sole.

Another excellent casting choice is actually a recasting choice: Hall in the Winston makeup, brought in to replace original Predator choice Jean-Claude Van Damme. The 5’9″ Van Damme was hardly the intimidating 7’3″ powerhouse that Hall proved to be, and was eventually canned during production. The massive size advantage of Hall in his Predator get-up helped supply the character with an otherworldly height edge over the 6’2″ Schwarzenegger and Weathers.

Predator serves as something of a masterclass for a certain kind of high-concept macho action picture. We believe every element of the adventure, and the crew’s strategic tactical efforts to flush out the Predator are utterly convincing. Part of the reason the movie is so effective is its identity a genre mash-up, mixing together elements of action, science-fiction and even horror into a delicious recipe, much like the previous summer’s sci-fi/action blockbuster Aliens, which also boasted a military team fighting lethal extra-terrestrial forces designed by master monster maker Stan Winston. The confluence of styles keeps the audience on-edge.

That said, Predator is careful to elevate itself beyond the standard-issue fare dominating each of the genres it applies. For instance, unlike the vast majority of horror pictures, our heroes are always one step ahead of us, and never find themselves backing into nightmare scenarios due to plot-necessitated bouts of unrealistic stupidity. Unlike the vast majority of action pictures, we take the body count here extremely personally. Every loss is resonant and affecting because these are fun, fully-developed out characters, not expendable unidimensional hunks of flesh. And unlike the vast majority of sci-fi pictures, this one is paced like an action picture! There’s also a comic element here, but the humor is all character-based (and apparently, largely the result of cast improvisations), and never winks at the audience in a way that would threaten to break the spell of the material. Later Arnie pictures certainly crossed that line and occasionally dipped into the realm of self-parody, but that’s not an issue here.

This is a terrific popcorn movie, boasting an amazing cast, crackling dialogue, engaging action choreography and set pieces, an unforgettable creature design, and plenty of the old ultra-violence that audiences crave. Predator is well worth a revisit.

As recounted in the excellent DVD featurette If It Bleeds, We Can Kill It, the tale of the film’s charmed creation is now far more outdated than the film, which has aged like a fine wine. Unrepresented first-time screenwriters Jim and John Thomas wrote the original Predator as a spec script, passed it along to a 20th Century Fox executive and saw the script optioned by studio head Lawrence Gordon. Gordon reached out to eventual star Arnold Schwarzenegger and veteran action producer Joel Silver, while producer John Davis sagely targeted director John McTiernan, and  got involved. That magical chain of events barely happens for original big-budget action stories of any stripe, let alone stuff by first-time writers without an agent or manager.

“He has an ability to take a script and infuse it with both a sense of energy but [also] great storytelling,” raved Davis of McTiernan. Bill Duke hailed McTiernan as “an actor’s director. He’s not just some director who’s just trying to make pretty pictures, he has a motivation for why this particular scene should be this way and what your character and motivation should be.”

In accordance with that insight, it turns out McTiernan opted to bring his cast to the Puerto Vallarta, Mexico location a week ahead of the film’s slated production schedule for some bonus military training. McTiernan astutely intuited that his buff action stars would need to seem convincing as the most lethal military force on the planet, moving through hostile jungle territory. Technical advisor Gary Goldman put the cast through their paces. “So their rehearsal period was, ‘See you guys, you report to the truck in the morning, we’re driving you 20 miles out and you walk back,” McTiernan said. Carl Weathers praised Goldman’s contribution. “Gary, in my mind, made a lot of things work that weren’t in-script, necessarily,” Weathers noted.

Per Shane Black, co-star Jesse Ventura, like Schwarzenegger another future U.S. governor, had been a Navy SEAL during the Vietnam War and purportedly thrived during the actors’ intensive training regimen. “I’ll put it this way — I definitely wouldn’t go in [for] real with these guys, but I’ll definitely do a film with them,” Ventura said of his colleague’s combat-readiness.

Black had been developing the script for the first entry in another soon-to-be legendary franchise, Lethal Weapon (1987), for Joel Silver when the producer approached him about revising the Thomas brothers’ draft. Black, then an up-and-coming young action screenwriter with an ear for fun and vulgar dialogue, was eventually cast in part so that he could be available for (uncredited) rewrites during his down time. In the film’s DVD documentary, Black himself disputed making much of a contribution to the finished product. “What the studio did — as they always do — is they took the original draft and just shot that. They go all the way around the circle, they get seven different writers to do a version, and then they all go back to the original draft.”