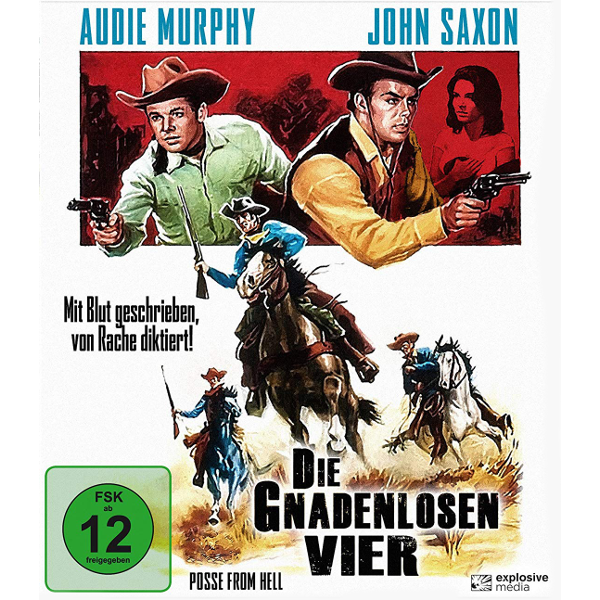 Yes, I have to admit that I’ve seen more bad Audie Murphy movies than good ones, including a few outright losers. But I can heartily recommend his early ‘punk without a cause’ JD feature Bad Boy, and his terrific turns in John Huston’s The Red Badge of Courage and The Unforgiven. He’s pretty good with James Stewart in Night Passage, too.

Posse from Hell is appreciably better than some other Murphy oaters — how many times have I had to sit through the tepid last reel of Guns of Fort Petticoat?  I don’t believe Posse is available in the United States, but Germany’s Explosive Media company has licensed it, and their disc is fully Region A compatible. One just has to select English audio and subtitle options from the menu before beginning. 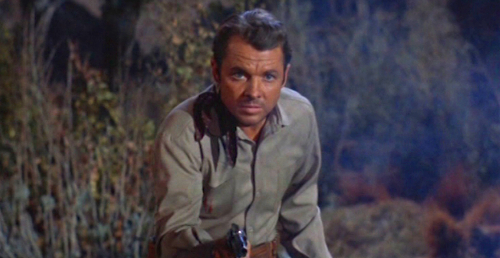 The producer was a veteran of serial westerns, while writer Clair Huffaker arose from the same pool of TV writers that produced Sam Peckinpah — he wrote Elvis Presley’s rather good Flaming Star. Considering some of the ‘usual sagebrush suspect’ names in the cast list, one might not expect much, but Posse from Hell clearly inspired its actors to try harder.

Four murderous thieves led by the psychotic, shotgun-happy Crip (Vic Morrow) invade and terrorize the town of Paradise, until its citizens surrender the contents of the bank’s safe — $11,000 dollars. Four men are dead, local girl Helen Caldwell (Zohra Lampert) has been abducted, and Marshal Isaac Webb (Ward Ramsey) isn’t expected to live. Webb’s friend Banner Cole (Audie Murphy) rides into town the next morning, and is enlisted to lead a posse in pursuit. It’s a motley group. Banker Seymour Kern (John Saxon) is a tenderfoot, entreated to go along by his boss (Ray Teal). Hothead Burt Hogan (Frank Overton) only wants to avenge the death of his brother. Retired Captain Jeremiah Brown (Robert Keith) wants to retrieve the glory of his earlier life, and Uncle Billy (Royal Dano) goes along because Helen is his niece. Hotshot Jock Wiley (Paul Carr) is eager to try out his trick-shooting skills. The only posse member riding out of plain civic duty is Johnny Caddo (Rodolfo Acosta), a native American shunned by some of his neighbors.

That situation sounds woefully generic, but Posse from Hell works up much more interest than usual. Audie Murphy is well cast as a quiet, untrusting gunman who endures incompetence but also learns to like and trust two of his posse members. The opening violence is both bluntly realistic and admirably restrained: we see the animalistic Crip blast down an unarmed hostage just for the fun of it, but the movie skips the carnage that follows. Next morning, with four corpses laid out on tables, the killing seems all the more awful.

The socially uplifting last words of Marshall Webb set the tone for Banner Cole’s conversion to civility: ‘People are nice Banner, you ought to learn to like them.” Yes, the basic theme is as naive as a silent western, but Audie Murphy was never a good fit for 1950s ‘psychological western’ trends. He fares much better with this more basic morality play arrangement. 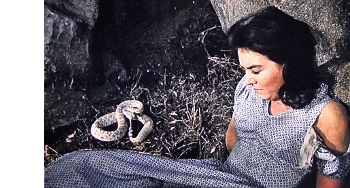 The story gets maximum entertainment mileage from dubious material, like John Saxon developing saddle sores and turning out to be an okay guy (instead of his usual overdone sharpie). Rodolfo Acosta’s good guy pal comes with a Civil Rights message that’s nicely understated. Paul Carr’s boastful gunslinger is well observed — he’s a punk, but not a mean-spirited punk.

I’ll watch anything with Zohra Lampert in it, as she always brings something special to a show. Here she’s stuck in the rape victim role, which was an epidemic for a few years around this time — some show must have broken the taboo, and producers rushed rape themes into movies to provide salacious advertising content. Lampert’s scenes are abbreviated, and she’s given one ill-considered exchange nobody could overcome — “Now that I’m RUINED, maybe I should be a BAD girl.” Everywhere else, her character comes off well. Besides, she has a uniquely cute and provocative smile.

Robert Keith plays an egotistical old fool with fantasies of command, who screws up the pursuit. Audie Murphy has to shoot him so he won’t shoot innocent men. I imagine audiences cheered. Barely along for the ride are the great Royal Dano, whose best career performance, it is said, was cut from the Huston/Murphy The Red Badge of Courage. Why the fine actor Frank Overton is present is hard to understand; he’s fine as a narrow-minded vengeance seeker, but won much bigger roles in more prestigious shows: Wild River, To Kill a Mockingbird, Fail-Safe. 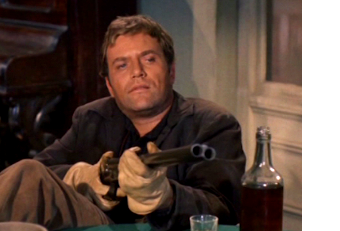 As the formidable killer Crip, Vic Morrow needs only to stare to be frightening. Lee Van Cleef’s single dramatic scene is almost identical to his part in The Bravados. At this point in his career he was almost exclusively limited to bad man parts, never living to see a The End title. A nice surprise is actor James Bell, who was always a little stiff and personality-challenged (I Walked with a Zombie, The Leopard Man) but by 1961 had aged nicely so that his calming ‘wise advice’ speeches are more than welcome. Handsome Ward Ramsey appears to have won a Universal contract by appearing in the previous year’s Dinosaurus! — he’d already been rushed into another Audie Murphy picture as well.

Posse from Hell does stop every so often for a far too on-the-nose dialogue statement. James Bell, Audie Murphy and John Saxon will make an observation that points our thoughts in a good direction, but then they continue and spell out an Author’s Message any Kindergartner would understand. In this movie I don’t mind this it a bit — the simple framework of the story, with the sincere performances, keeps the speechifying on track.

A western backlot town gets some use but we spend most of our time on location in Lone Pine. The action staging isn’t top-flight, but the smart screenplay compensates. Director Coleman was a first assistant to Alfred Hitchcock, associate- produced on five Hitchcock classics and directed a lot of Alfred Hitchcock Presents TV episodes. Yet his name has stayed under the radar — he directed another Audie Murphy action film and then retreated to TV for several years.

We can read the name ‘Wingate Smith’ as AD on practically every John Ford picture filmed in the sound era, and with Billy Wilder the name ‘C.C. Coleman Jr.’ crops up many times. Did these men never put their experiences on record?   Perhaps that’s a question for Joseph McBride. I once failed to interest Robert H. Justman, who assisted in one way or another on a score of famous noir pictures, to talk to me; I think it was because he had no interest in telling stories that would profit somebody else. Is the great Robert Aldrich the most famous, successful assistant-to-full-director conversion we know of?  Aldrich had a reputation of toughness working for Losey, Milestone, Wellman, Chaplin, Renoir, Lewin and Polonsky. I don’t think he ever spelled out his thoughts about those great directors, either.

Explosive Media’s Blu-ray of Posse from Hell is an excellent remaster licensed from Universal — the transfer is so good, even the Day for Night sequences are well timed. Cameraman Clifford Stine sometimes specialized in effects work, and one flawless split screen puts Ms. Lampert in jeopardy from a mean-looking rattlesnake. Stine lights nicely for Eastmancolor; original prints for Posse were done by Pathé Labs, which at this time were turning out excellent work for A.I.P. as well. Although produced in Germany, the disc plays normally in Region A American Blu-ray players.

The music score is just a few cues from the Universal library. The main title music is a shocker because it’s taken directly from one (or more) of the William Alland Universal sci-fi pictures, with no changes at all. It’s like somebody made a mistake and thought this was Posse from Alpha Centauri — with that music playing, we expect a Monolith Monster or a Metaluna Mutant to show up.

The German disc includes an easy to use menu (no Deutsch necessary), a trailer (in German) and a photo gallery. Universal’s original poster artwork for Posse from Hell is almost ridiculously generic.