Hollywood finally decided to get serious about the Korean War debacle with a pro-Army, anti-politics battle epic that blames our own negotiators as much as the enemy. Director Lewis Milestone and star Gregory Peck lead a full company of favorite actors in a gritty story of ugly combat in absurd conditions: die taking territory today, give it back to the enemy later. Director Lewis Milestone has quite a record with war movies. His most famous film is the Oscar-winning original All Quiet on the Western Front, still the finest ‘pacifist’ war movie on the books. But he returned to war themes throughout his career, with several different approaches: anti-fascist fury (Edge of Darkness), pro-Soviet cheerleading (The North Star), anti-Japanese fury (The Purple Heart), folksy poetics (A Walk in the Sun), and Semper Fi cheerleading (The Halls of Montezuma).

Milestone’s last combat feature is one of his best. Pork Chop Hill is a reasoned protest against the conditions under which American fighting men were forced to fight in Korea. The Yankee soliders are as valiant, resourceful and committed as ever — but the diplomats have betrayed them by giving Red negotiators the upper hand. The war was 6 years past and almost forgotten by America, even though our military was still policing the truce line between North and South Korea (and still is, 70 years later). Pork Chop Hill demands respect for the troops that fought and died in an unpopular war. 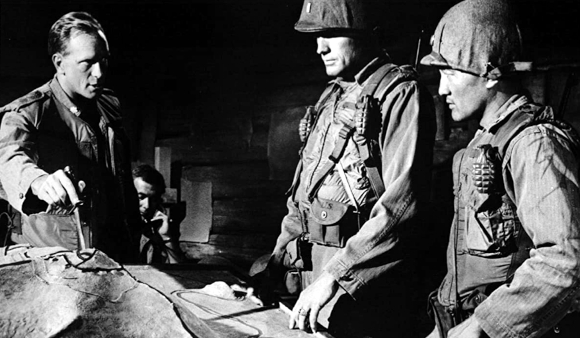 This would at first seem to be a hawk’s view of the Korean Police Action, but it settles into an honest look at the dilemma of the modern soldier, fighting unclear missions with inadequate support. Even the New York Times noted the resentment the combat soldiers feel for their own leaders in this picture.

Pork Chop Hill is often noted for its excellent cast of familiar faces, well used. The film is enjoyable just as a spotting quiz for young actors — every Hollywood male capable of hefting an M-1 seems to have gotten the call. It was a debut picture for a couple of big names. 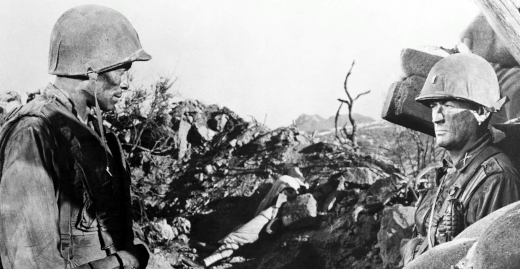 April, 1953. Lt. Joe Clemons (Gregory Peck) is in an awful bind. A cease-fire pact is expected momentarily from the truce talks at Panmunjom. The division is preparing to be pulled back when they’re instead ordered to re-take a high ground called Pork Chop Hill, which has already changed hands several times. Clemons rallies his men and seizes the position, only for the North Koreans — and Chinese — to throw a massive force against them.

No matter how clearly Clemons explains his situation, reinforcements are not committed. The few units that do join them are not even aware of the desperate urgency of the matter. For five days, a single company holds out against two divisions of regular Chinese Army troops. At one point Clemens’ force is reduced to just 25 men. The ordeal is a horror of modern diplomacy — each side at the truce talks wants to bargain from a militarily superior position.

‘Fifties movies about Korea had a difficult time evoking the same spirit as films about WW2. These troops have no clear objective. Our negotiators expect the opposing side to cry Uncle and surrender in the face of overwhelming UN firepower. Battle strategy is dictated from the truce talks. Good officers like Lt. Clemons suffer heavy losses to take territory, only to be ordered to withdraw and give it back.

In reality there was a real Lt. Clemons, two years out of West Point. Photos exist of a respectful meeting between Clemons’ family and that of Gregory Peck. Clemons held Pork Chop Hill for several days until he was relieved. Not much later, the UN once again abandoned the hill to the Chinese forces as part of their negotiations.

Pork Chop Hill seems an dirty and thankless ordeal, with its now-iconic images of a lonely string of exhausted GIs facing Chinese hordes in the black of night. We hear some dialogue mentions of other nationalities fighting, but we really only see U.S. troops. Korea looks like WW2 reheated and served up in the most inhospitable battle theater imaginable. 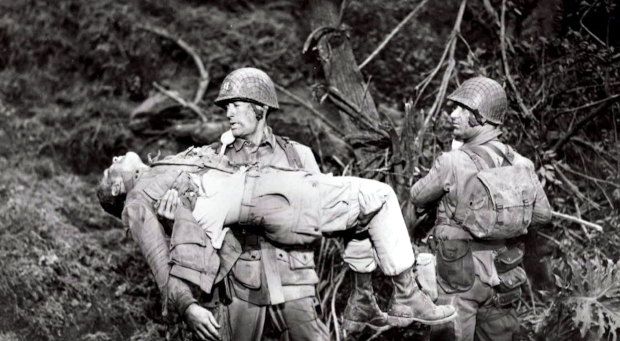 Milestone reuses his famous signature camera move from All Quiet on the Western Front. The camera trucks swiftly sideways along a trench. Troops advance and are shot down one after another, as in a factory assembly line. Milestone used the same trucking setup many times in Edge of Darkness. Pork Chop Hill is fought in trenches, just like the WW1 classic. This time we’re the ones mowing down seemingly inexhaustible supplies of enemy troops. The idea that victory could always be ours as long as we have the best guns ‘n’ ammo comes from this Faith in Firepower credo. That certainly seems to have been our mindset going into Vietnam.

Gregory Peck is perhaps ten years too old for the part yet comes across well as the frustrated officer in charge. It’s another solid portrait of a man holding out under maximum pressure, like Peck’s overtaxed air commander in Twelve O’Clock High. The Pentagon’s public relations officers didn’t mind that Lt. Clemons can barely contain his contempt for the orders he must obey — the Army shared Clemons’ viewpoint. The blame for everything is directed at the negotiators in Panmunjom, for thinking they can mix combat with polite diplomacy.

I’m serious about the quiz. Name these guys in this graphic and the next. One is a repeat.

Pork Chop Hill’s large cast is stacked with performing favorites. Actors we wouldn’t expect to play tough guys take on well-written showcase parts. Harry Guardino’s private is upset that he’s overdue to be rotated out of combat; his discharge papers are late. Guardino had been kicking around Hollywood for eight years, and would soon be playing Barabbas in a 70mm epic. Rip Torn’s film debut was three years earlier, for Elia Kazan. He gets to flex his Texas drawl as a fellow Lieutenant offering aid to Clemons; he’d join Guardino as Judas in the same Nicholas Ray film.

George Peppard had been on TV and in just one other movie, and would break out with his next assignment, Vincente Minnelli’s Home from the Hill. Peppard has a few good lines but is mostly noted for hauling around a .30 caliber machine gun. A note to actors cast in war films – volunteer to carry the lightest weaponry you can.

Korea was reportedly the first U.S. action with regular black divisions. African-American stars James Edwards and Woody Strode receive equal billing and representation. Edwards’ efficient Corporal is not as memorable as Strode’s terrified Pvt. Franklin, who spends much of the picture hiding out, looking for an excuse to escape combat. It’s memorable because most pictures around this time would cast a black actor as a token hero. By contrast, George Shibata’s Nisei Lt. is a straight-arrow warrior with more on the ball even than Lt. Clemons. Actor Shibata had studied at West Point, at the same time as the real Joe Clemons.

If one looks closely, a very young Clarence Williams III is in for a bit as a message runner.

The un-aggressive Norman Fell helps Harry Guardino with the film’s light comic relief. Robert Blake wins our approval as an eager beaver who keeps fighting and helping out even after receiving wounds. Also acquitting themselves with honor are capable Lieutenants Charles Aidman, Bert Remsen and Martin Landau (his first film); and Chuck Hayward, Gavin MacLeod and William Wellman Jr. as various soldiers in distress. Fighting the good fight is our cult favorite Harry Dean Stanton, who makes the best of his one half of a dialogue line and two or three walkthroughs.

The well-organized production is a good showcase for Sam Leavitt’s no-frills B&W cinematography. The battle-scarred hill locations match well with the interior dugouts back on stage sets. The night-for-night battle scenes are excellent — Leavitt suggests minimal lighting yet lets us see everything. Director Milestone’s instructions must have been to pre- lay a hundred yards of dolly tracks, because we do a lot of creeping up hills with our nervously advancing troops. Leavitt did terrific work for directors who communicated what they wanted (Otto Preminger) and functioned less well with those that did not (Sam Peckinpah).

The only cutaways from the hilltop battlefield are to the negotiating table, and also to a cave in which Chinese propaganda warfare experts broadcast morale-deflating speeches to our troops. The scenes aren’t very convincing. We’re told that the snide ‘give up Joe’ Chinese musical programs are accurate enough, but the flat visuals give off the vibe of an anti-Red propaganda piece. 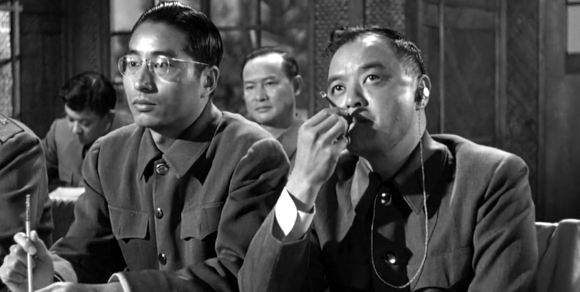 Those Panmunjom scenes put the American negotiators in a bad light. The Communist representative stares insultingly at the ceiling, feigning boredom; a U.S. Admiral (Carl Benton Reid) is a hothead who makes us look like amateurs, expecting the Commies to concede because we’re ‘the good guys.’ The movie takes the position that we shouldn’t be negotiating with the bastards in the first place, so technically it’s hard-line. It’s not right-wing — that faction wanted us to drop Atom Bombs on the Reds.

The few Korean War combat movies made in wartime were outright propaganda by producers like Howard Hughes … the vicious One Minute to Zero comes to mind. Pork Chop Hill gives us a more reasoned look at how desperate and frustrating the combat must have been for those on the front lines.

Viavision [Imprint]’s Blu-ray of Pork Chop Hill looks great; it always has. This appears to be the exact same transfer used for a previous Olive Films Blu-ray. Sam Leavitt was considered to be a master of the B&W semi-docu style. Leonard Rosenman’s music score employs a ticky-tacky pseudo-oriental theme that today would get the movie cancelled for ethnic insensitivity. But almost all Western movies with ‘oriental’ themes once had music like this.

Steven J. Rubin and Steve Mitchell have a corner going on war-themed commentaries. For this title they have production facts and a long list of actor bios, plus good information about the astonishing valor at Pork Chop Hill and the depressing particulars of the fighting in Korea. The hour-long 1988 documentary Gregory Peck, His Own Man was produced to tie-in with the release of Peck’s Old Gringo. It has plenty of on-camera talk with Jane Fonda and a long list of actors that have worked with Peck, as well as family members.

We’re told that Lewis Milestone’s first cut of Pork Chop Hill was twenty minutes longer. Milestone’s career was just about used up. He went directly from this film to ‘direct traffic’ for Frank Sinatra and the Rat Pack in the original Ocean’s Eleven. His final feature assignment — at age 66 — was to step in to finish the remake of Mutiny on the Bounty after Marlon Brando succeeded in having director Carol Reed removed.

This reviewer saw Pork Chop Hill under unusual circumstances, at the age of 8. My namesake Uncle Glenn was visiting us in Hawaii and he and my father (who almost never went to the movies) took me to see it at the base theater a block away. The audience was enthusiastic. Afterwards I remember my Uncle — an ex-Marine — making comments to the effect of, ‘those Washington politicians need to get out of the way so we can fight.’ I remember the words without knowing what he was talking about.