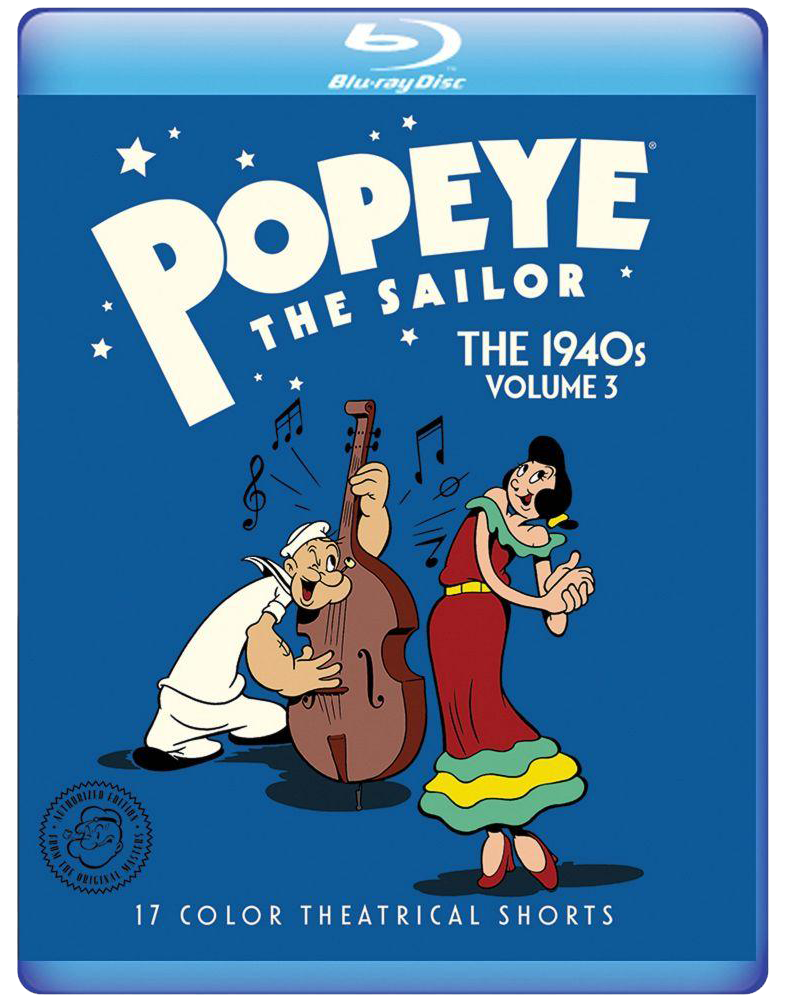 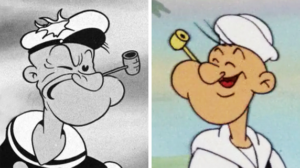 E. C. Segar’s Popeye made his newspaper debut in 1929 and his first animated appearance in 1933 with Max Fleischer’s Popeye the Sailor. By the time he reached Famous Studios a decade later the ornery bar-fighter had become respectable – safely homogenized for the delicate sensibilities of an audience that existed only for over-cautious suits in the front office.

None of that should stop Popeye fans and animation completists from scooping up Popeye the Sailor: The 1940s – Volume 3, Warner Archive’s third and final round-up of Popeye’s post-war adventures. The glossy veneer of these brightly colored cartoons was tailor made for high def scrutiny.

The set opens with one of the studio’s most memorable productions, the schizoid feminist fantasy, Olive Oyl for President. What at first seems like a forward-looking satire is in reality a sucker punch delivered by the status quo circa 1948. 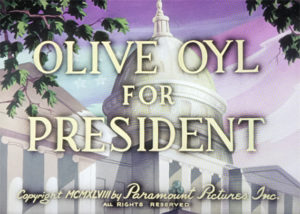 During a campaign rally Popeye ridicules Olive for daring to suggest the possibility of a female president – Olive being Olive she sends her clueless beau into dreamland via a well-placed frying pan. The passed-out sailor envisions a future in which his lady friend assumes the duties of commander in chief.

Directed by Izzy Sparber and written by Joe Stultz and Larry Riley, Olive’s “feminist” agenda is in fact a misogynistic goof – the dizzy demands of a stereotypical housewife that include streets decorated with ribbons and bows and giant ice cream cones for the kiddies (Little Audrey makes a cute cameo). 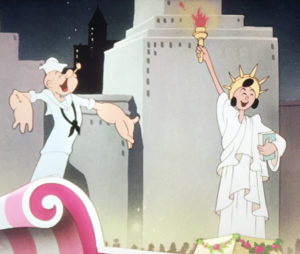 That knock on the head did send a message though – by cartoon’s end Popeye is fully on board with a woman in the White House (Olive has a plan, you see).

Jack Mercer, Mae Questel and Jackson Beck are the actors (voicing Popeye, Olive and Bluto respectively) and Questel gets the opportunity to sing Olive’s catchy song, If I were President (“If I were prezzy-de-int.”)

The song was updated – along with the cartoon’s central concept – from Fleischer’s own 1932 Betty Boop for President. It’s no surprise that Fleischer’s product is considerably more energetic – Betty is not just a hot-to-trot ball of fire but lots more fun. 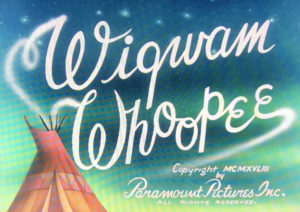 Olive Oyl for President was filmed in the two-color process known as Cinecolor – a short-lived competitor to Technicolor used for low budget cowboy films and the occasional monster movie (though the process did nothing to liven up the endearingly clunky dinos of 1948’s Unknown Island). That same year’s Wigwam Whoopee (the set comes with a warning about racist stereotypes) was notable as the first Popeye toon to be processed in another limited-color process developed by Polaroid – Polacolor – which enjoyed the benefit of three hues for its color palette.

All that fiddling with color schemes didn’t last long even though like-minded systems like Trucolor gave westerns like Twilight in the Sierras and Trigger Jr. the  aura of a faded scrapbook and the otherworldly atmosphere of 1953’s Invaders from Mars was enhanced considerably by an enhanced version of Cinecolor using three-colors, SuperCinecolor*. The limited color spectrum  found on some of the Popeye shorts is surprisingly vivid – that said, cartoons generally shouldn’t look like they’ve been left out in the sun too long. 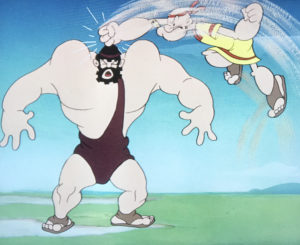 Popeye Meets Hercules, another short produced in Polacolor, introduces the startling concept of a female Popeye but the laziness of the writing, like most of the material in Volume 3, is in high relief. The half-baked gags are still not as dispiriting as 1948’s Spinach vs Hamburgers which merely recycles scenes from previous shorts including 1944’s The Anvil Chorus Girl.

The majority of the cartoons are colorful time killers (including The Fly’s Last Flight (a remake of Fleischer’s Flies Ain’t Human from 1941), skillfully animated and with lovely background paintings that at least give visual relief from the emptiness at their core. And though the hot jazz of Fleischer’s early Paramounts is sorely missed, Winston Sharple’s frenetic scores define these cartoons in a way that the scripts and art do not. 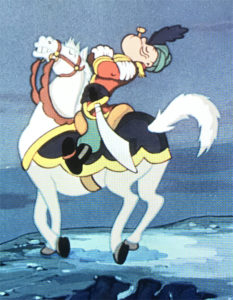 There is a real diamond amid all the costume jewelry – 1949’s Popeye’s Premiere takes the same tack as Spinach vs Hamburgers but with a lot more success – it’s basically a re-release of Fleischer Studio’s epic fantasy from 1939, Aladdin and His Wonderful Lamp.

Directed by Dave Fleischer, the cartoon is propelled by Jack Mercer’s inspired ad-libbing as the hungry sailor (“Oh boy, home cooking!”) and Margie Hines’ (standing in for Mae) seamless reproduction of Olive’s wails and whines.

A real cartoon classic, Aladdin combines the rude energy of the early Paramounts and the lush artwork of Disney’s Silly Symphonies. The short looks terrific on Blu ray – fingers crossed we’ll get the real deal in the near future.

The 40’s version of Popeye, though blander than bland compared to his rowdy 30’s incarnation, looks beautiful on Warner Archive’s Blu Ray – it’s more than reasonably priced and full of eye-popping scenery, ear-buzzing music and Mercer and Questel’s memorable mugging, wrapping up Popeye’s 40’s adventures in a high def bow – on to the 50’s!

*A tip of the Hatlo hat to savvy correspondent “B” for the info on SuperCinecolor.