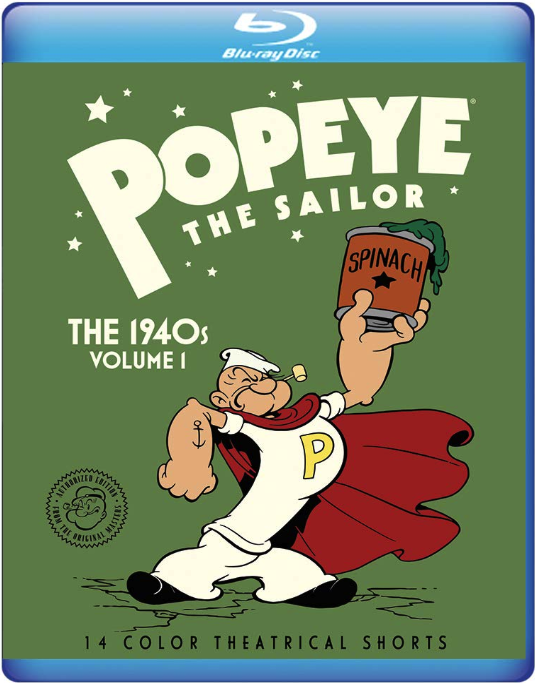 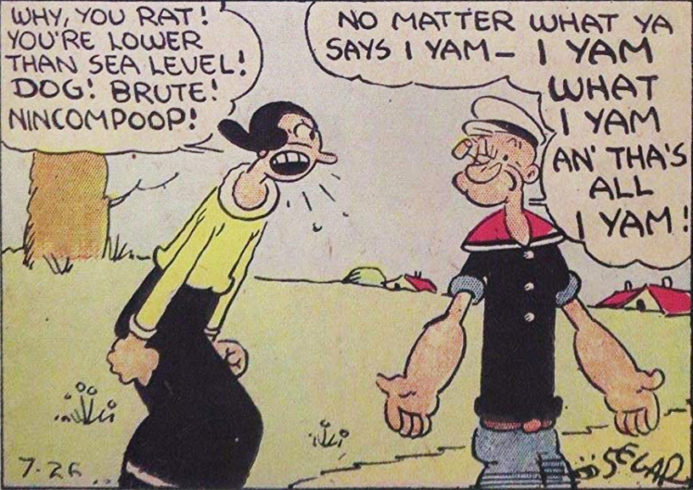 The most animated of the great philosophers, Popeye relied on his fists to express his unapologetic mantra – “I am what I am.” Created by newspaper cartoonist E.C. Segar in 1929, the cantankerous but big-hearted sailor was brought to the screen by Max Fleischer and his brother Dave in a series of blissfully rowdy cartoons running from 1933 till 1942 – which is when everything went south.

1942 was the year that Max’s relationships with both Dave and Paramount fell apart – leading to the brothers’ exit and the beginning of Famous Studios, an in-house animation factory at Paramount staffed by Fleischer’s former creative team. But it may have been the sailor at the center of the storm who suffered most from the break-up.

Segar’s Popeye was an unlikely hero – a deadpan comedian with a plug ugly kisser and a balloon animal physique – a crude portrait that was inevitably softened by the Fleischers even as they enhanced his character –  thanks to a parade of gravelly-voiced actors the irascible swab’s way with words added a comic dimension not found in the Sunday papers. 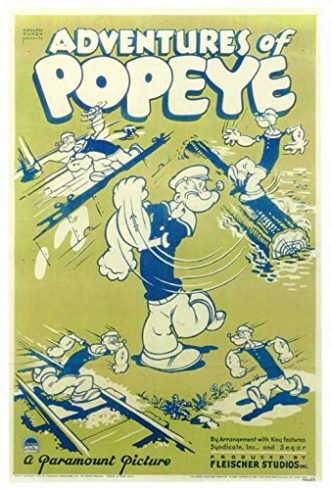 The celluloid Popeye was a laid back gag man whose best quips were audible only to those paying attention –  the W.C. Fields of the ink and paint club. That all changed after the Fleischers were banished and Famous Studios switched to Technicolor. Gone were Segar’s melting pot eccentrics, the flea-bit flophouses and bursting fire hydrants – in their place was a homogenized suburbia painted in the plummy colors of a Mentos roll.

Warner Archives takes full advantage of those radiant Technicolor hues with their brilliant new Blu ray release, Popeye The Sailor: The 1940s Volume 1. Beautiful to behold but short on laughs, the set exposes the choppy waters the weathered sailor was navigating on his way to middle age.

Popeye’s Famous Studios adventures were further unmoored by the near total omission of his Thimble Theater cohorts – the heart and soul of Segar’s universe – Swee’Pea, Poopdeck Pappy and Eugene the Jeep. But the exile of Wimpy – hamburger connoisseur and perennial freeloader par excellence – was the unkindest cut of all. The plots focused instead on the never ending love-hate triangle of Popeye, Olive Oyl and Bluto peppered with recycled gags from pioneers like Tex Avery and Buster Keaton. 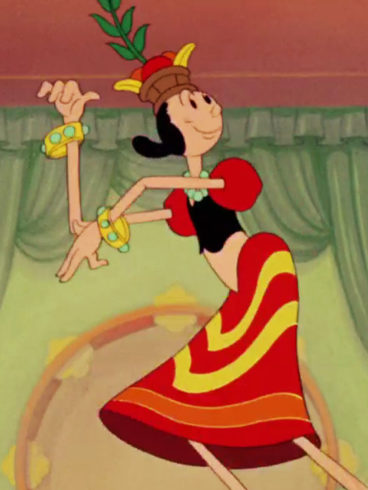 Most of the shorts are pleasurable merely for their vibrant palettes – We’re On Our Way to Rio borrows its frivolous nature from Carmen Miranda musicals (Olive commands The Brazilian Bombshell’s skyscraping chapeau without tipping over) while the weirdly sinister Puppet Love, in which Bluto manufactures a unnervingly lifeless Popeye marionette to attack Olive, feels like the logline for a Robert Bloch story.

The fly in the ointment – what earned this set a warning label from WB (“… intended for the Adult Collector and May Not Be Suitable for Children.”) – is that these cartoons were produced in the 40’s – and during wartime at that – which means there’s plenty of racist propaganda to contend with. Oddly, the one cartoon on the set that qualifies in that regard has little to do with the war itself. 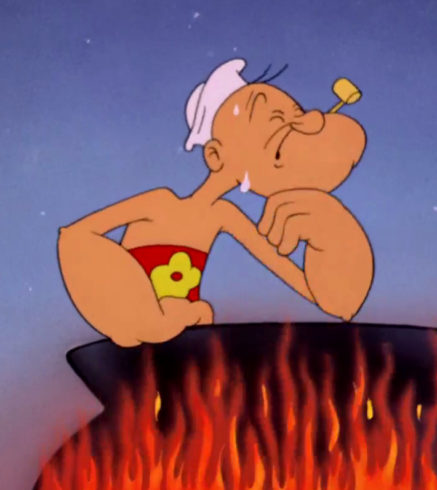 Pop-Pie Ala Mode finds our hero washing up on a remote isle teeming with drooling cannibals ready for dinner (you know where this is going). The racial caricatures are as gruesome as you might imagine and to seal the deal, the film ends with Popeye perched on a throne as the natives worship at the feet of their conquering god. It’s not pretty. Of interest to hungry pop culture mavens, Ala Mode’s cookbook gag predates The Twilight Zone’s To Serve Man by 17 years.

The Popeye cartoons of the 30’s and 40’s spanned two worlds – the economic crash of 1929 and a World War begun ten years later. In 1933 anxious ticket buyers reveled in the hard scrabble humor of Fleischer’s universe – but it seems the war demanded a kinder, gentler form of escapism – Famous Studios was happy to provide the rose-colored glasses.