In a war film, what’s the difference between nasty exploitation and just plain honest reportage? André De Toth made tough-minded action films with the best of them, and this nail-biting commando mission with Michael Caine and Nigel Davenport is simply superb, one of those great action pictures that’s not widely screened. It’s not ‘feel good’ enough to be suitable for Memorial Day TV marathons — to its credit. 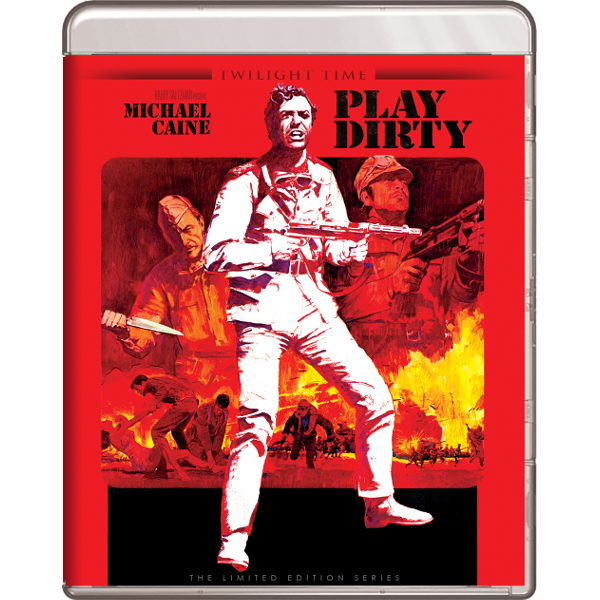 Some movies that were ignored when new now seem far more important, perhaps due to the tenor of the times. 1968’s Play Dirty is the most direct attack on military honor to come out during the Vietnam War, but what once was considered tasteless cynicism now plays as simple reality. Compared to this André De Toth combat picture, Robert Aldrich’s Attack is kid’s stuff. De Toth even gives Aldrich’s The Dirty Dozen a run for its money. Its own commercial hopes were dashed in a welter of criminals-as-soldiers wannabe thrillers like the bloated The Devil’s Brigade. Aldrich’s own Too Late the Hero is very much like Play Dirty, but far inferior. Excellent acting, a big scale production and taut direction on Spanish locations enliven what has to be the most agreeably amoral combat mission ever. Unlike the pretenders Play Dirty plays for keeps: if Kirk Douglas’ morally outraged officer from Paths of Glory witnessed the nasty politics in this picture, he’d drop dead from shock.

The story comes under the heading of ‘far fetched commando missions,’ but with a difference — instead of the usual ‘how I won the war’ earnestness, Play Dirty assumes that some men engaged in warfare behave the same way they would in any other business, where one takes care of one’s own bottom line, and good luck to everybody else. It’s the later stages of the North African campaign. After several failed missions in German-held territory, Col. Masters (Nigel Green) wins a reprieve from the double-dealing Brigadier General Blore (Harry Andrews) by offering to destroy a Nazi fuel dump way behind the battle lines. Masters sends out a seven-man patrol headed by the mercenary Captain Cyril Leech (Nigel Davenport) but technically commanded by Captain Douglas (Michael Caine), an oil supply officer previously attached to rearward duties. Douglas and Leech butt heads over command and procedure, especially when Leech refuses to follow orders. The insolent Captain instead rushes to prove that Douglas’ notions of fair play are completely inappropriate in the field. Douglas makes a vital engineering contribution to the mission but Leech has the inside track on their true situation: Blore and Masters back at H.Q. double-cross them at every opportunity.

Like a junior exec fighting for his perks and stock options, the sweaty Col. Masters shows his imperious Brigadier Blore photos of a German oil dump, ‘taken with one of those Brownies he’s been giving to his Arab agents.’ Blore approves the plan but immediately assigns the same mission to his own officer, taking credit for the whole idea and using Masters’ exact same words. Blore wants Masters’ outfit to be annihilated before they can embarrass him again or, God forbid, succeed and steal some of his glory. Was warfare ever this ugly, or have the screenwriters merely transposed their Hollywood experiences into war-movie terms?

Survivalists and desert dogs will love the long-trek aspect of the movie, with practical problems at every turn.  Strung out 400 miles behind enemy lines, the mini-convoy encounters unexpected minefields and clever German booby traps. The ground is so rocky that they’re constantly stopping to change worn-out tires.  In between slaughtering untrustworthy Arabs and haggling over whom is giving the orders, Douglas and Leech slowly come to terms with their situation. The ragged convoy has a lot in common with the truck drivers in H.G. Clouzot’s The Wages of Fear, except that they might be overtaken by a German patrol at any time. At one point they must haul their vehicles up a ridiculously steep mountain, a brutal engineering feat that becomes a classic suspense set piece. Douglas uses cables to drag the trucks up the incline, much like Klaus Kinski’s steamboat in Herzog’s Fitzcarraldo.

The dauntless missions celebrated in movies like The Bridge on the River Kwai and The Guns of Navarone have their complexities, but the commanders in those movies generally act in good faith. We find it humorous in Kwai when William Holden’s craven American is ‘playfully’ blackmailed to join a British commando jaunt. In Play Dirty Michael Caine’s inexperienced Captain Douglas is actually an oil company engineer loaned to the Army to work only in fuel transfers, but that doesn’t stop him from being impressed for a suicide mission. Douglas has no idea what little part loyalty and ethics plays in Special Ops strategy. The chain of command is a license for officers to squander the lives of soldiers below their rank.

The levels of strategic deception and professional betrayal on view are daunting. Commanders Blore and Masters are worse than the nasty officers played by George Macready and Adolphe Menjou in Kubrick’s Paths of Glory, and those Frenchmen had a 19th century ethic of class bigotry for an excuse. As soon as Captain Leech sees the second column of British trucks, he realizes that Brig. Blore has sold them out. Eventually, Colonel Masters will betray them as well.

Masters is an educated book soldier, a student of ancient warfare like George C. Scott in Patton two years later. He’s adopted the ethics of a sewer snake because everyone above him in the chain of command is doing the exact same thing. Masters dryly asserts that “War is a criminal enterprise. I fight it with criminals.” There’s not much difference between Masters’ scurvy crew and the professional mercenaries that were contracted through private corporations to perform dirty ‘security’ missions during the Iraq war. Criminals and killers hired away from military oversight can slaughter civilians with impunity.

Most everything in the picture challenges the norm, which is very, very good. Col. Masters’ irregulars are truly dangerous men, not clichés like Roger Corman’s cardboard commandos in The Secret Invasion. There are no colorful name actors among this ethnically diverse bunch, which adds to the realism. The loyalty of the Arab, Greek and Cypriot mercenaries can be counted on only as long as the mission goes well. These commandos carry uniforms of three armies. They tune to American, German and Italian radio stations every time they change identities, a gambit that courts disaster when Douglas forgets to remove his British identity tag. Various patriotic tunes are heard in German and Italian, as well as “Lili Marlene” in multiple languages. The mission’s Arab guides are a laughing homosexual pair, reminding us of  Lawrence of Arabia (for which De Toth directed second-unit). 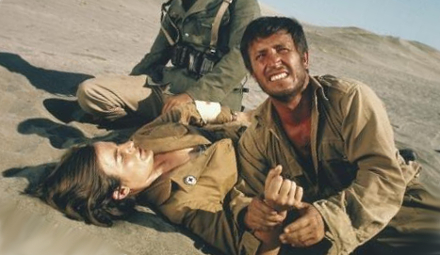 Douglas must adapt to fighting with men who would shoot him with little provocation. They laugh openly at some of his attempts at command. They loot dead bodies. As soon as the officers’ backs are turned, they try to rape the hardy German nurse (Vivian Pickles) they’ve kidnapped to care for one of their wounded. Yet in action the criminal ‘dregs’ prove to be quite reliable. A treacherous-looking Greek, Kostos Manov (Takis Emmanouel), saves Douglas from a particularly devilish German booby trap. Captain Leech sneers at Douglas’ ethical protests but has a vested interest in keeping him alive, as Masters has promised a big bonus to bring the officer back in one piece.

The physical challenges of the desert seem real and the soldiers look like they’ve really dragged themselves across a wasteland. But the film’s biggest dose of reality is the way it demolishes old-movie notions concerning the ‘rules’ of warfare. Ten years before, Val Guest made an extremely controversial (in England) war picture called Yesterday’s Enemy, which exploded the myth that atrocious war crimes were exclusively Japanese. Play Dirty is of course an escapist action thriller, but it’s also sufficiently serious to generate an extreme unease about warfare anywhere, between any kinds of armies.

Michael Caine is masterful as Douglas, a far less idealistic officer than his breakthrough role in Zulu. A rational engineer with some pride in his uniform, Douglas must re-orient his thinking’s piratical mission. The unsung Nigel Davenport is solidly convincing as Leech, a crooked sea captain recruited straight from prison. Always excellent, Davenport graced some fine pictures, including Sands of the Kalahari, A High Wind in Jamaica, A Man for All Seasons, The Last Valley (where’s that Blu-ray?), Phase IV and Zulu Dawn. We wish that Cornel Wilde had hired an appropriate director like Val Guest, Cy Endfield or André De Toth to put Davenport’s No Blade of Grass into better shape.

Director De Toth’s better pictures (Ramrod, Pitfall, Crime Wave) present conflicted characters in compromising situations. They’re often worldly-wise or slightly disillusioned. Here the cynicism is complete. The cagey officers played by Harry Andrews and Nigel Green are not simply villains — when the pressure is off they’re quite chummy and understanding of each other. These are not easy relationships to express in action-movie terms, and the credit belongs to director De Toth. He avoids easy messages, making us care about this worst-case-scenario mission even when the worst bad guys prove to be the leaders back at camp.

Play Dirty never looks cheap – De Toth stages a German ambush that becomes a large-scale massacre. One pan across a harbor gives us a wide vista with plenty of authentic-looking German vehicles — probably the same Spanish Army materiel that would show up in Patton and The Battle of Britain. The show ends up an engaging, satisfying warfare caper picture, one with devastating turns of fortune that would become terrible spoilers if revealed here.

The Twilight Time Blu-ray of Play Dirty is a fine encoding of this really good, largely un-shown war picture. It will be an exciting discovery for action fans tired of cornball Dirty Dozen wannabes.

Edward Scaife does wonders with the desert vistas, which are often quite beautiful. Scaife and De Toth make intelligent use of perfected Panavision zoom lenses. Many impressive shots isolate racing vehicles in choker telephoto frames.

For extras Twilight Time has only an Isolated M&E (Music and Sound Effects) Track, and the original trailer. Perhaps the trailer is what turned off exhibitors and/or audiences. Accentuating all the story’s nasty qualities, it makes the movie look like pure exploitation, when it’s really an exhilarating action drama.

Julie Kirgo’s liner notes once again peg both the film’s appeal and its claim to relevance amid the glut of supposed anti-war action movies. This is De Toth’s last signed picture as director. Twenty five years later he was present for a 1995 American Cinematheque retrospective, where Play Dirty re-emerged. It’s still not as well-known as it ought to be — probably because it’s too honest about the reality of warfare.