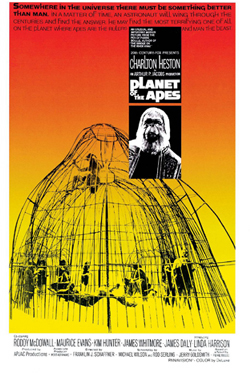 Planet of the Apes

One of the major science fiction pictures of its era. J. Lee Thompson was originally to direct, but was busy with McKenna’s Gold. Franklin Schaffner was recommended to replace him by star Charlton Heston. Author Pierre Boulle objected to the famous ending provided by Rod Serling (rewritten by Michael Wilson), but later came to accept it as better than the one in his novel. Followed by four sequels, a short lived network tv series, a Saturday morning cartoon series and a‚ 2001 remake.