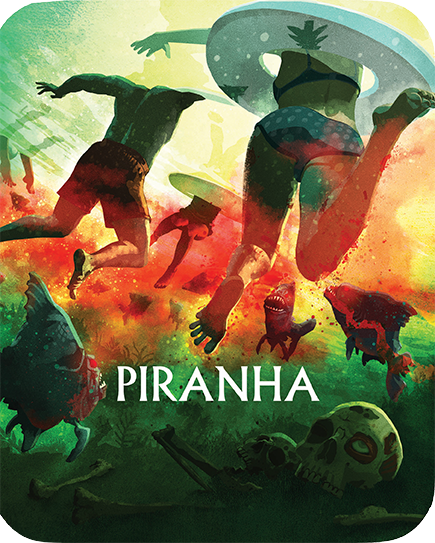 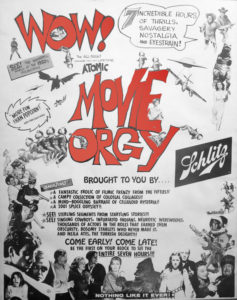 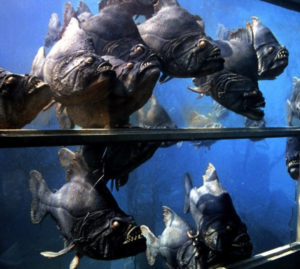 After a stint as a film critic and a couple of years as editor at Roger Corman’s New World Pictures, Dante joined office mate Allan Arkush in 1976 to co-direct a low-budget parody of low-budget movies, Hollywood Boulevard. In 1978 he made his solo debut with the horror-comedy Piranha.

Written by first-time screenwriter John Sayles, Piranha begins with an adventurous young couple braving the night air for a moonlit skinny dip when, in the words of Richard Dreyfuss, they end up as “hot lunch” for the sharp-teethed monsters circling below the surface – the first hint that the Corman-produced exploitation item was conceived with one eye on the box office and the other on Jaws. 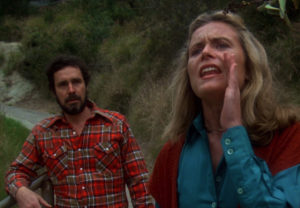 Maggie seeks out the help of Paul Grogan, an ornery recluse played by Bradford Dillman who’s more interested in the gin he’s serving up for breakfast than joining a search party. They settle into an uneasy alliance and light out for the sticks, bumping into a parade of deep-fried eccentrics lead by Hollywood vets Keenan Wynn and Kevin McCarthy.

Still cultivating the alarmist zeal that electrified the climax of Invasion of the Body Snatchers, McCarthy reveals the reason for the teens’ deaths – they were sliced and diced by a mutant strain of piranha (one particularly loathsome little devil, the work of animator Phil Tippet, makes a quick appearance only to disappear from the movie). 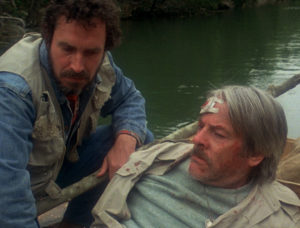 The vicious critters were bred as a secret weapon to be used in Vietnam – just another cog in the military-industrial machine. That cheeky but dead-serious worldview – the monsters are due on Maple Street and they’re Nixon fans – became an ongoing subtext in Dante’s work.

The hungry little monsters take a two-pronged approach to their reign of terror – advancing quickly on a nearby children’s camp (lorded over by an effetely villainous camp counselor played by Paul Bartel) while sending a separate unit toward a water park run by outrageous land developer and sometime cowpoke Buck Gardner (dressed in Grand Ole Opry drag, Dick Miller channels a lifetime of TV car salesmen). 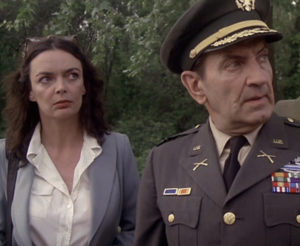 Dante’s movie-mad casting method reaches lift-off with the odd couple pairing of Bruce Gordon and Barbara Steele. Gordon, the quintessential Frank Nitti in TV’s The Untouchables, plays the double-dealing Colonel Waxman. Steele, the villainous two-timer of Corman’s Pit and the Pendulum, brings a distinctively European flavor to San Marcos as a beautifully gloomy scientist who knows more about the piranha than she cares to admit.

Despite (or because of) everyone’s best efforts the piranha finally crash the party – swimmers of all shapes and sizes are dragged from their inflatable rafts and pool floats, resulting in fountains of blood and floating body parts (Corman’s mantra during the dailies? “More blood!”). The finale is a backwoods Bedlam, a non-stop feeding frenzy set in motion by Dante and co-editor Mark Goldblatt’s fast and furious editing and an unstoppable camera crew lead by Jamie Anderson that seems to be everywhere at once. 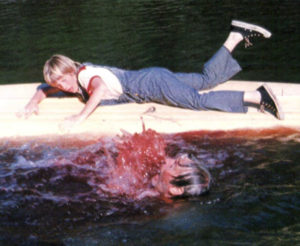 The plot wasn’t the only thing reminiscent of Jaws – Dante underwent Spielbergian agita when confronted with a run and gun schedule that spent much of its time in or around the water. Daunting enough if you’re buoyed by Universal’s nine million dollar budget – near impossible with New World funding (though the cash-crunch was alleviated by a co-funding deal between New World and United Artists).

Still, Corman’s frugal presence is felt – Belinda Balaski had a spectacular death scene that needed re-shooting – she swapped out her extra work day for higher billing.

Roger Corman would most likely agree with Godard – “It’s not where you take things from – it’s where you take them to.” Piranha was a smash – New World’s highest earning picture since the company’s inception. Its release in August of 1978, fast on the fins of Jaws 2, caused Universal lawyers to reach for their briefcases but Spielberg stepped in (he later called Piranha “the best of the Jaws ripoffs.”) 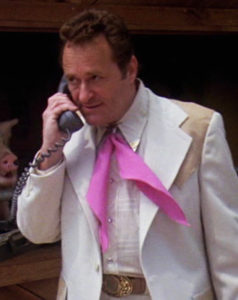 Shout has ported over several existing supplements but have gone the distance with a brand new commentary from Roger Corman himself.

Additional Scenes From The TV Version